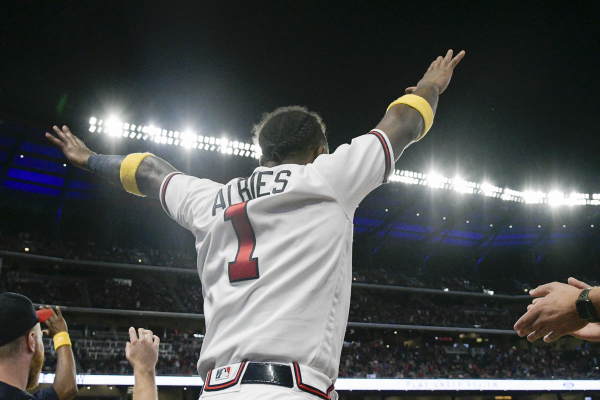 For the Atlanta Braves, life is going pretty good right now. On Sunday, they beat the Arizona Diamondbacks 9-5 and they now sit 4.5 games ahead of the Philadelphia Phillies for first place in the AL East. For the San Francisco Giants, it can’t get much worse. After losing to the Milwaukee Brewers 6-3 on Sunday, the Giants have now lost 8 games in a row and have quickly fallen to 11 games back in the division.

The money line for Monday night’s game is set at the Atlanta Braves -120 and the San Francisco Giants +110. The over/under on runs scored is set at 7.5.

Braves Looking To Put Away The NL East

It what has been a remarkable season, one in which most every expert expected the Washington Nationals to win the NL East hands down, the Braves find themselves just a few weeks away from a playoff berth. Despite how close it is, at only 3.5 games up, they still know they have work to do and that will continue on Monday when the Braves send Sean Newcomb to the mound to take on the Giants.

On the season, the southpaw is 11-8 with a 3.92 ERA, 1.35 WHIP and opponents are hitting .229 against him. In 149.1 innings, he has 140 strikeouts, 74 walks and has allowed 16 home runs. Despite impressive numbers, he has struggled in his last two outings. Against Boston and Tampa Bay, both losses, he went a combined 8.1 innings, allowing 9 earned runs and striking out 9. The Braves will hope he can get back on track against a much weaker Giants’ offense.

In what has been an injury-plagued year, the Giants just couldn’t hold on anymore. Throughout the entire season, it seems as if they have been hovering about 5 games back of the Rockies, Dodgers, and Diamondbacks, but with their current 8-game skid, it has sent them back to the point where they are probably waving the white flag.

In what has otherwise been a frustrating year, one bright spot has been the emergence of DereckRodriguez. The son of Hall of Famer Pudge Rodriguez, Dereck is 6-2 with a 2.41 ERA, 1.05 WHIP and opponents are hitting .211 off of him. In 97 innings, he has struck out 78, walked 27 and has only allowed 6 home runs. In his last outing, a 6-2 loss to the Colorado Rockies, Rodriguez went 6 innings, allowing 1 earned run and striking out 6.

On the offensive side, there just hasn’t been much to get excited about. Their leading home run hitter has only 15 (Evan Longoria and Gorkys Hernandez), their leading RBI leader only has 50 (Brandon Crawford) and their leader in runs scored has just 56 (also Crawford).

Needless to say, offense has been hard to come by this year. Sadly, it was somewhat expected when your offense revolved around guys all on the wrong side of 30 in Buster Posey (out for the year injured), Evan Longoria and AndrewMcCutchen (since traded to the Yankees). I don’t know if a rebuild is on the horizon in San Francisco, but it has to at least be considered.

I actually really like Dereck Rodriguez and I think that he will pitch well in this one. As I just alluded to, though, I don’t know where the Giants are going to get their runs from. Sean Newcomb isn’t stellar, but he can be effective against a team struggling and the Braves offense is potent enough to get to the pen even if Rodriguez pitches well (he hasn’t gone past the 6th inning of any of his last 3 starts). Ultimately, I think the Giants run their losing streak to 9 in this one and the Braves get the win. Take Atlanta at -120 in this one.