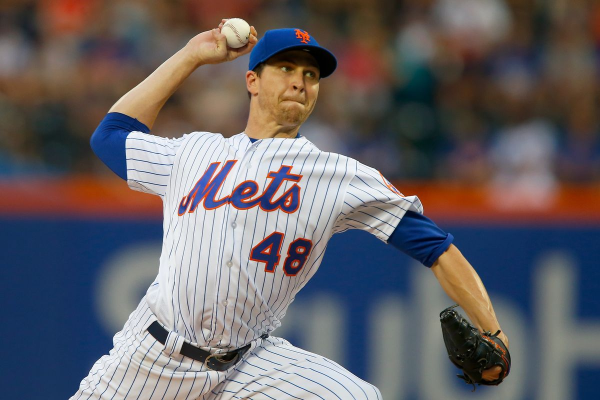 Memorial Day features a matchup of NL East versus NL West when the New York Mets (26-26) travel to Dodger Stadium to take on the Los Angeles Dodgers (35-18). For the Mets, they have been riding a bit of a hot streak, having won six of their last seven, including a 4-3 win over the Tigers on Sunday. For the Dodgers, who have the best record in the National League and second best overall, they were able to dispose of the Pirates over the weekend, sweeping the series, including an 11-7 win on Sunday.

This game features a battle of former Cy Young Award winners as the Mets will send Jacob deGrom (3-5, 3.72 ERA) to the mound to square off with Clayton Kershaw (4-0, 3.33 ERA). First pitch for this matchup is scheduled for 8:10 pm ET.

The moneyline for this one features the New York Mets +155 and the Los Angeles Dodgers -165. The over/under on runs scored is set at 6.5.

Offensively, the Dodgers have been one of the best teams in all of baseball over the first third of the season. They currently rank sixth overall, averaging 5.27 runs per game (5.64 at home). For the Mets, they fall to the middle of the pack at 17th overall at 4.61 runs per game (4.14 on the road).

On the pitching side, the Dodgers once again have the upper hand, especially when it comes to earned run average. Their staff ERA ranks third in the majors at 3.45 (it is a gaudy 2.59 at home). For the Mets, they come in at 18th in the league with a staff ERA of 4.45 (4.56 on the road).

After going 6-1 in their last homestand, the Mets are trying to carry this momentum on the road with them. To do so, they will turn to ace Jacob deGrom to take the ball on Monday. On the season, deGrom is 3-5 in 10 starts with a 3.72 ERA, 1.14 WHIP and opponents are hitting .223 against him. In 58 innings, he has allowed 49 hits, 24 earned runs, eight home runs and has struck out 75 while walking 17.

In his last outing, a 6-1 win over the Washington Nationals, deGrom went six innings, allowing two hits, three walks and one earned run while striking out eight. Unfortunately, he did not play a part in the decision, but he hopes to pitch just as well against an extremely tough Dodgers’ lineup.

On the offensive side, Wilson Ramos has been swinging a hot bat over the last week. In 22 at-bats, he is hitting .455/.556/.864 in that span with three home runs, seven runs batted in and nine runs scored.

On the season, though, Peter Alonso has to be the most pleasant surprise for Mets fans. The rookie first baseman is hitting .250/.330/.587 with a team-leading 17 home runs, 38 runs batted in and 32 runs scored. At this point, he is the hands-down favorite to win Rookie of the Year, but the biggest hope for Alonso and the Mets is that he can keep this level of success as we move into the latter parts of the season.

With a seven-game lead at this point in the season, the Dodgers know that they are in the driver’s seat moving forward; however, they also know that they need to keep playing good ball not to let the likes of the Diamondbacks or Padres sneak back into the mix. Trying to keep it going on Monday will be ace Clayton Kershaw.

On the season, Kershaw is 4-0 in seven starts with a 3.33 ERA, 0.98 WHIP and opponents are hitting .220 against him. In 46 innings, he has allowed 37 hits, 17 earned runs, seven home runs and has struck out 44 versus eight walks. In his last outing, a 7-3 win over the Padres, Kershaw went 6.1 innings, allowing six hits, one walk, two earned runs and struck out eight. He will look to keep it going against the Mets Monday.

Offensively, Cody Bellinger has just been electric this season. Even though he has been “slumping” as of late, he is still hitting .386/.470/.755 with 18 home runs, 48 runs batted in and 47 runs scored this season. He has truly been the centerpiece of the offense, but it certainly is not like he is it.

Pitching on both sides for this one is dominant. Even though both deGrom and Kershaw have hit rough patches at times this season, they still have shown flashes of their brilliance, especially as of late. With that in mind, this one comes down to the offense.

Frankly, I just trust the Dodgers’ offense to be more likely to squeak out a few runs more so than the Mets. Furthermore, I like the Dodgers’ bullpen a little better, and given that both of these starters are capable of going six or seven shutout innings, the game may be decided by the bullpens. For my money, I am taking the Dodgers at -165.