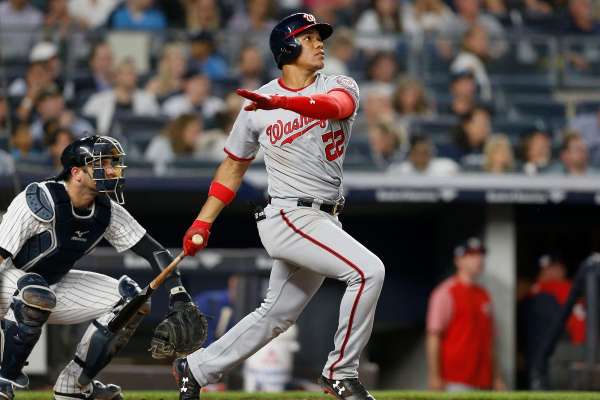 The Rookie of the Year contests are narrowing down in both leagues as the end of the season approaches. In the National League, we have what amounts to a two-man race coming down the stretch. This is a tight race to say the least, too, so expect both players to continue their tear through the NL. While many ROYs are given to rookies simply having a good year, this year’s National League race is a little different.

These are two future franchise players having fantastic seasons. Their numbers are that of All-Stars already yet they still flash some other-worldly type talent every week, giving us a glimpse of what is to come for years and years. Big hits to all fields, absolute bombs no stadium would hold, and plenty of glove while in the field are all in their repertoire at the ripe old ages of not-even-20.

Get to know these names as you’ll be hearing them for some time. Of course, a tightrace provides plenty of value in the sportsbook, so let’s have a look at the two youngsters and see where the good money is.

National League Rookie of the Year

A late June call-up was supposed to put a damper on Juan Soto’s rookie of the year chances. Apparently, no one told Soto, as he has put on an absolute clinic since joining the Nationals on the big stage. He is leading all rookies in OBP and OPS.

He’s second in Slugging and sitting at third in Average. First in walks, second in runs scored, third in dingers, fourth in doubles and RBIs and fifth in hits. I think you get the point. The kid plays much older than his 19 years, showing great discipline at the plate while still being able to hit moonshots often. Parks can’t hold this kid and it’s just going to get worse for NL pitchers.

The Nats, of course, have been a disappointment this season and, while they are still playing over .500, the playoffs look to be out of reach, meaning there will be some big changes this off-season. Soto will keep going, though, as Washington wants him to work on the day in, day out things of great players.

They are reworking his pregame routine and media time to instill the habits of a Hall of Famer. It shouldn’t be tough because the talent is there. That said, we like this guy as an MVP in three years time more than rookie of the year in 2018. Fantastic season aside, his competition for the award has the edge and the payout we prefer.

Sure, Ronald Acuna Jr. has had a few successful short stints in the majors already. And yes, he has been the number 1 prospect of many a scout’s boards for a few years now. And, of course, his numbers are what you may expect from a player of his pedigree. However, consider a few wild-card factors and you’ll quickly see Acuna as the rookie out front for the ROY award.

First, we’ll start with the easy part, his numbers. He’s slashing a line of .290/.358/.570 with a plus defense and value on the basepaths. He has 21 homers, 21 doubles, 45 RBI’s and a 3.6 WAR, and that’s all from the leadoff spot. This would usually be enough to claim the prize but this year it’s going to take a little bit more.

That’s why, secondly, we have to take into account his home run streak last month. He homered in five straight game setting the record for consecutive dingers by a rookie. He became the youngest player to ever homer in five straight games as well. In three of those games, he hit a leadoff home run becoming only the second player in MLB history to have three leadoff shots in a row. Two of those games were a doubleheader. That isn’t a record but it is cool. However, the coolest factoid may be that two of those dingers were on the first pitch of the game. Gotta love that stat.

Thirdly, the home run streak came to a sudden end as Acuna was hit by a pitch in his first AB of the sixth game. The plunking was widely criticized, rightfully so, and while the streak came to an end, Acuna was able to avoid serious injury. And this will be the reason he takes the ROY award home. The sympathy vote will put Acuna over the top. With such an evenly matched contest, this is the edge you need to win. Three to one odds is a nice payout as well.