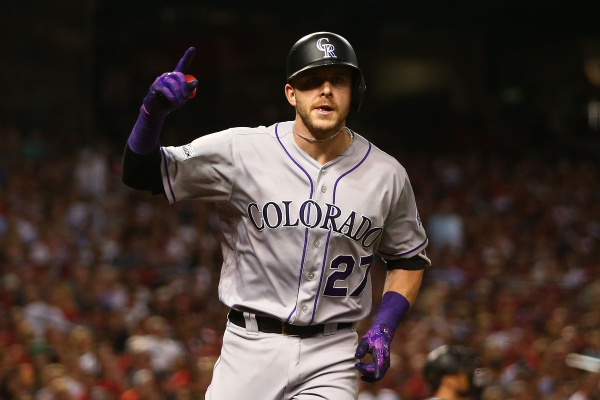 Wednesday night features a matchup of NL West versus NL Central when the Colorado Rockies (13-17) travel to Miller Park to take on the Milwaukee Brewers (17-14). This will be the third of a four-game series as the Brewers have taken the first two games, 5-1 and 4-3. In Tuesday’s win, Jhoulys Chacin took the win, and Josh Hader picked up his 7th save of the season. Jesus Aguilar hit his third home run of the season. In the loss, German Marquez went 7 innings, giving up 4 earned runs and striking out 6.

The moneyline for Wednesday’s game is set at the Colorado Rockies +120 and the Milwaukee Brewers -130. The over/under for runs scored is set at 9.

Although it is still very early in the season, the Colorado Rockies have arguably been one of the more disappointing teams in the league. At 13-17, they sit fourth in the NL West, only a half-game up on the San Francisco Giants and 5.5 games behind the Dodgers. Trying to get the season turned around, they will look to Antonio Senzatela to take the mound on Wednesday. On the season, he is 2-1 with a 3.93 ERA, 1.36 WHIP and opponents are hitting a robust .290 against him.

In 18.1 innings, Senzatela has given up 20 hits, 8 earned runs and has struck out 11 versus 5 walks. In his last outing, an 8-4 win over the Atlanta Braves, Senzatela went 5.2 innings, allowing 7 hits, 3 walks, 3 earned runs and struck out 4 while earning the win. He will look to build on this outing Wednesday against the Brewers.

With the St. Louis Cardinals off to a hot start, the Milwaukee Brewers know that they need to continue to play good ball, or they could find themselves looking up from an even bigger hole than the three games back they already sit. Trying to keep it going against the Rockies will be Chase Anderson. He will be making his third start since moving from the bullpen to the rotation, and on the season he is 2-0 with a 3.20 ERA, 1.27 WHIP and opponents are hitting .216 against him.

In 19.2 innings (7 games, 2 starts), Anderson has allowed 16 hits, 7 earned runs, 3 home runs and has struck out 22 while walking 9. In his last outing, a 10-2 win over the Mets, Anderson went 4.2 innings, allowing 5 hits, 2 earned runs and struck out 4 while walking 3. He will look to improve against the Rockies, hoping to go deeper into the game.

Sadly for the Brewers, they will be without their best hitter, Christian Yelich, for this one as he continues to deal with back discomfort. Just in time, though, has been the emergence of Jesus Aguilar. After a rough start to the season, Aguilar has now homered 3 times in his last 2 games. Although he is hitting just .163/.244/.300 with 3 home runs, 12 runs batted in and 8 runs scored, his pop has certainly been noticeable as of late.

With Yelich out, the next best hitter this season for the Brewers has been catcher Yasmani Grandal. Signed as a free agent this offseason, Grandal is hitting .283/.356/.500 with 6 home runs, 12 runs batted in and 16 runs scored. Even without Yelich, this team is still deep and can put up runs in a lot of ways.

Rockies Get One Back

While I can’t say that I love the pitching matchup on either side, I certainly give the edge to the Rockies in this one. I am just not a huge Chase Anderson fan, and even if he does give you a solid outing, the Brewers will be lucky to get more than 5 innings out of him. Throw on top of that the fact that some of the Rockies’ players have owned him and it could be a bad sign for Milwaukee.

I do think that both sides will put runs up so the over/under of 9 is probably pretty fair, but in the long run, I like the Rockies to prevail. For my money, I am taking the underdog in this one and will take the Rockies at +120.