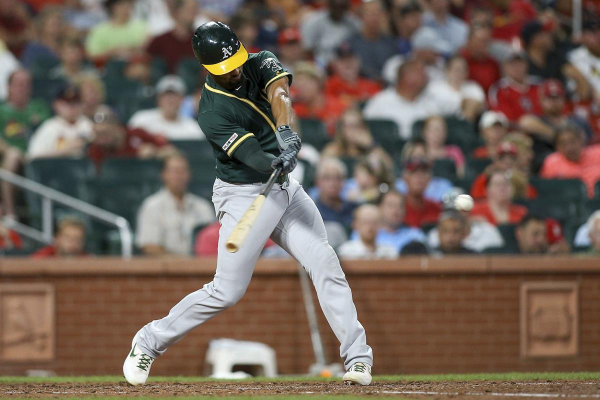 While it was not to the same level that Albert Pujols received over the weekend, another former Cardinal received a very warm welcome back as the St. Louis faithful gave Stephen Piscotty a well-deserved reception on Tuesday. In return, Piscotty and the Oakland A’s (42-38) beat up on the St. Louis Cardinals (40-38), winning the opener, 7-3. All seven runs were scored off of Cardinals’ starter Jack Flaherty, and even though the A’s starter was similarly bad, the bullpen was able to shut it down for Oakland.

On Wednesday, the Cardinals will be looking to split the short two-game series. The pitching matchup for this one features the A’s Daniel Mengden (1-1, 5.09 ERA) against the Cardinals’ Adam Wainwright (5-6, 4.50 ERA). First pitch for this contest is scheduled for 7:15 pm ET from Busch Stadium.

At the time of this writing, betting lines had still not been posted for this one, so make sure to check closer to game time.

On the pitching side, these two teams once again come in very close proximity to one another. The Cardinals rank ninth in staff earned run average with a 4.15 ERA (3.42 at home). For the A’s, they come in one spot behind at 10th with a 4.21 ERA (4.87 on the road).

Even though the A’s are eight games behind the Houston Astros for first in the AL West, Oakland is still very much alive in the postseason discussion. They sit just 1.5 games back of the second Wild Card spot (although there are three teams currently tied for that spot). With that in mind, Oakland knows every game is valuable and will look to take both games from the Cardinals.

To do so, they will send out righty Daniel Mengden. On the season, Mengden is 1-1 in three starts with a 5.09 ERA, 1.65 WHIP and opponents are hitting .253 against him. In 23 innings, he has allowed 23 hits, 13 earned runs, one home run and has struck out 19 while walking 15. This will be Mengden’s first start since being called back up from the minors as he is filling the vacant spot of Frankie Montas, who was suspended for 80 games.

After the loss on Tuesday, the Cardinals currently find themselves 2.5 games behind the Chicago Cubs in the NL Central. With the Cubs, Cards, Brewers and even Reds and Pirates playing well, the NL Central may be one of the most intriguing divisions to watch down the stretch. With that in mind, the Cardinals need every win they can get, especially playing at home.

To try to pick up the win Wednesday, the Cards will send out veteran righty Adam Wainwright. On the season, he is 5-6 in 14 starts with a 4.50 ERA, 1.39 WHIP and opponents are hitting .263 against him. In 76 innings, he has allowed 74 hits, 38 earned runs, nine home runs and has struck out 67 versus 32 walks. In his last outing, a 7-6 loss to the Marlins, Wainwright went 5 1/3 innings, allowing six hits, one walk, and three earned runs while striking out six.

On the offensive side, the Cardinals have been led this year by Marcell Ozuna. The leftfielder is hitting .256/.324/.512 with 20 home runs, 62 runs batted in and 52 runs scored (all three of those last stats lead the team, although he is tied with Paul DeJong for runs scored). He has also been their best hitter over the last month as he is hitting .320/.362/.536 with six home runs, 17 runs batted in and 14 runs scored in that time. With players like Paul Goldschmidt, DeJong, Yadier Molina, and others around him, the Cardinals have the talent to put up crooked numbers but have not been nearly as consistent as they would like thus far.

I will be honest in saying I don’t love either pitcher in this one. Mengden was just recalled but struggled mightily earlier in the season for the A’s. For Wainwright, he has shown flashes at times of brilliance but has been far from consistent this year. His last start was ok, especially since it was his first since coming off the injured list, but it was also against a much weaker Marlins lineup. You could make the argument of taking either team in this, but for my money, I like Oakland to outslug the Cardinals in what I think could be a high-scoring game.