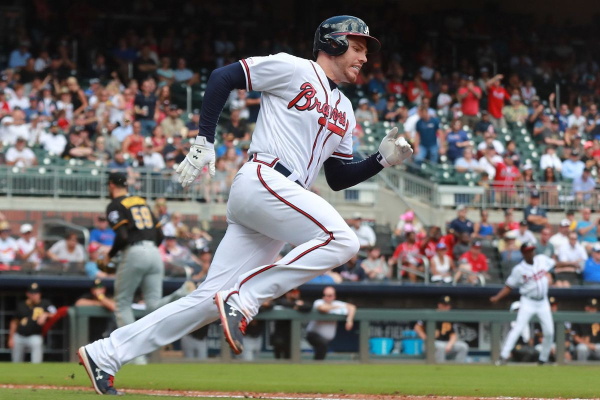 Tuesday night will feature the second of a four-game series between division leaders as the NL East-leading Atlanta Braves (46-33) take on the NL Central-leading Chicago Cubs (43-35) at Wrigley Field. The Cubs were able to take the first one 8-3 despite tempers flaring after Tyler Flowers and Willson Contreras got into it after Flowers felt Contreras overly enjoyed his home run. Still, the Cubs came away victorious and will be looking to take the second game as well on Tuesday. The pitching matchup for this one will feature Max Fried (8-3, 4.03 ERA) pitching for the Braves against the Cubs’ Adbert Alzolay (1-0, 2.25 ERA). First pitch for this matchup is scheduled for 8:05 pm ET.

The moneyline for this one comes in at the Atlanta Braves -115 and the Chicago Cubs +105.

When you put it all together, both of these teams come in in the top 10 in terms of run differential. The Cubs rank sixth with a run differential of +59 while the Braves come in at eighth at +49.

At 5.5 games up in the NL East on second-place Philadelphia, the Braves certainly are in good shape; however, they also know that there is a lot of season left and will look to even up the series with the Cubs on Tuesday. To do so, they will turn to lefty Max Fried. On the season, Fried is 8-3 in 15 starts with a 4.03 ERA, 1.34 WHIP and opponents are hitting .275 against him. In 82 2/3 innings, he has allowed 89 hits, 37 earned runs, 11 home runs and has struck out 76 versus 22 walks. In his last outing, a 7-2 win over the Mets, Fried went six innings, allowing eight hits, one walk, and two earned runs while striking out six.

While the Cubs also hold first place in their division, their lead is certainly less than the Braves. Knowing they will have a dogfight with the Brewers and Cardinals, among others in the division, the Cubs know every game is essential. Trying to take the first two games of the series, the Cubs will send Adbert Alzolay to the mound Tuesday. In his debut on Thursday, Alzolay threw four innings, allowing one hit, one run and striking out five. He will look to carry over that dominance in his first start in the majors.

This one could go either way, and if Monday’s showed anything, it is that the Cubs enjoy hitting at home. For me, though, it comes down to the pitching. Adbert Alzolay may end up a fantastic starter for the Cubs, but there is something about this being his first start that could cause some issues. For Fried, even though he has calmed down from his hot start, he pitched well in his last game and had a lot of success his first go-round with the Cubs. Back in April, he only allowed one hit in six scoreless innings. Again, a lot has changed since that game, but I still like the Braves to take this one when it is all said and done. For my money, I am taking the Braves at -115.