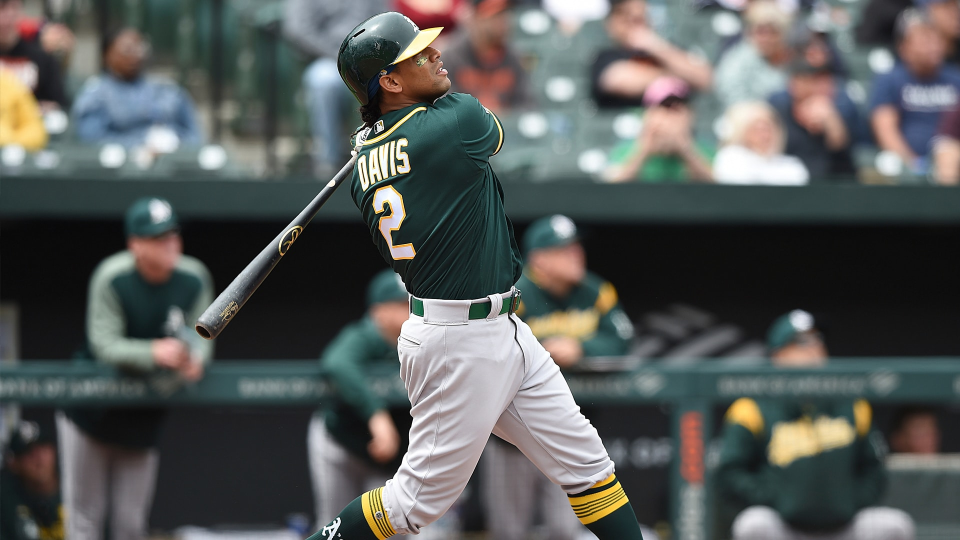 Saturday will feature a battle of AL West teams when the Oakland Athletics (10-8) travel to Globe Life Park to take on the Texas Rangers (6-7). This will be the second of a three-game series, with Oakland taking the first game 8-6. Lou Trivino picked up the win in relief after starter Mike Fiers had given up 6 runs in 5 innings while Blake Treinen picked up his fifth save of the season. Khris Davis and Ramon Laureano homered for the A’s in the win while Asdrubal Cabrera and Elvis Andrus got homers in the loss for the Rangers. The pitching matchup for Saturday’s contest will feature Marco Estrada (0-1, 4.87 ERA) taking on Adrian Sampson (0-1, 1.86 ERA). First pitch for this contest is scheduled for 8:05 pm ET.

The moneyline for Saturday’s game is set at the Oakland Athletics -111 and the Texas Rangers +101. The over/under for runs scored is set at 11.

Athletics’ Offense Continues To Be Explosive

The Oakland Athletics have a winning record early in the season in large part to how well their offense has performed. They currently rank third in the majors in runs scored, second in home runs and third in runs batted in. A large part of their explosiveness has come from one guy: Khris Davis. In just his 17th game of the season, Khris Davis hit his major league-leading 10thhome run of the season. He also has 19 runs batted in and 12 runs scored while hitting .265/.315/.706. Including Davis, the A’s have 9 players who have 2 home runs or more, including Matt Chapman with 4 and Ramon Laureano, Chris Pinder, Marcus Semien, and Josh Phegley with 3. Needless to say, they can certainly make you pay offensively.

While the offense has been solid, the pitching has been spotty at times. In fact, 3 of their 5 starting pitchers have ERA’s of 4.24 or higher. Saturday’s starter, Marco Estrada, comes into this one 0-1 with a 4.87 ERA, 1.13 WHIP and opponents are hitting .225 against him. In 20.1 innings, he has given up 18 hits, 11 earned runs, 5 home runs, 5 walks, and 10 strikeouts. In his last outing, a 12-4 loss to the Baltimore Orioles, Estrada went 4 innings, allowing 9 hits and 6 earned runs, while striking out just 3. He will certainly be looking for a stronger start on Saturday against the Rangers.

The Rangers will be looking for some quality innings from Adrian Sampson in the contest on Saturday. This will be Sampson’s first start, as he has pitched a 9.2 innings over 2 games of relief for the Rangers. In those 9.2 innings, Sampson has allowed 8 hits, 2 earned runs and has struck out 5 while walking 4. Depending on how many innings they can get out of Sampson, it may become a bullpen game for the Rangers.

On the offensive side, the Rangers have been around the middle of the pack in most stats. They currently rank 16thin home runs, 13thin runs batted in and 18thin batting average. Elvis Andrus has been leading the way for the Rangers as he is hitting .389/.400/.556 with a .956 OPS. He has 3 doubles, 2 home runs, 10 runs batted in, and 3 stolen bases. Aside from Andrus, Joey Gallo and Asdrubal Cabrera have shown quite a bit of power, hitting 4 home runs apiece; however, with that power has come strikeouts and low batting average. Cabrera has 14 strikeouts and is hitting .190 while Gallo has 18 strikeouts and is hitting .171.

Betting On The Athletics

While I think Adrian Sampson is capable of giving the Rangers some quality innings, I still think that Oakland just has too much offensive firepower. I don’t like Estrada’s matchup in this one, so I do think it will be a high-scoring affair, but ultimately, in what could be a battle of the bullpens, I prefer Oakland’s bullpen over the bullpen of Texas. When you have the likes of Blake Treinen, Lou Trivino, and others, you don’t have to always have dominant starting pitching. For my money, I am taking Khrush Davis and the Oakland A’s at -111 in this one.