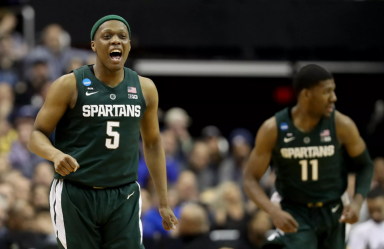 It will be the AL East versus the AL Central on Thursday as the Toronto Blue Jays (3-4) will travel to Progressive Field to take on the Cleveland Indians (2-3). For the Blue Jays, they are coming off of a 5-3 win over the Baltimore Orioles on Wednesday. In that game, Randal Grichuk, fresh off of a contract extension, slugged two home runs while Matt Shoemaker picked up his second win and Ken Giles picked up his second save. For the Indians, they are coming off of a disappointing loss to the Chicago White Sox, 8-3, on Wednesday. In the game, Corey Kluber was roughed up for 6 runs (4 earned runs) on 8 hits in 3.1 innings. They will look to turn their fortunes around Thursday as they send out righty Trevor Bauer (0-0, 1.29 ERA) to take on the Blue Jay’s Anibal Sanchez (1-0, 0.00 ERA). First pitch for this one is scheduled for 6:10 pm ET.

The moneyline for Thursday’s game is set at the Toronto Blue Jays +155 and the Cleveland Indians -175. The over/under on runs scored is set at 7.

Blue Jays Trying To Take The Series Opener On The Road

The Blue Jays know that going into Progressive Field and stealing one from Trevor Bauer and the Indians won’t be easy, but if Anibal Sanchez pitches like he did in his first game, they very well may have a chance. In his first outing of the season, against the Detroit Tigers, Sanchez went 5 inning of scoreless ball, allowing 3 hits, 3 walks and striking out 6. For the most part, he has fared pretty well against Indian hitters. Hanley Ramirez and Leonys Martin have both homered off of him, but Martin is batting just .250 and Ramirez is batting .111 against him. Aside from that, the only other person even hitting over .200 is Jose Ramirez, but while he is batting .400, it is in a relatively small sample size (5 at bats).

Offensively, it was nice to see Grichuk explode offensively on Wednesday. Some have already questioned the size of the contract that the Blue Jays gave him, but when he is right, he can be a dynamic offensive player. Aside from him, Rowdy Tellez (2 home runs, 4 runs batted in), Freddy Galvis (1 home run, 3 runs batted in, 2 runs, .286 batting average) and Richard Urena (6 for 12, 2 doubles) have all performed relatively well to start the season. Still, there isn’t a whole lot of excitement in the Toronto lineup and they will likely struggle to consistently put up runs throughout the season.

Indians Trying To Bounce Back After Ugly Loss Wednesday

The old saying is that you are only as good as your next day’s starter, and while the Indians may have been disappointed in the performance of Corey Kluber Wednesday, they have another ace in the making in Trevor Bauer ready to go Thursday. In his first start, Bauer went 7 innings, allowing 1 hit, 1 earned run and 1 walk while striking out 9 in a 2-1 win over the Minnesota Twins. Furthermore, not too many of the Blue Jays hitters have seen him. Only one person has seen him more than twice, and that is Justin Smoak (3 for 9 with 3 runs batted in). Still, if Bauer is on, he is just about as tough as they come in the league so runs could be at a premium for the Blue Jays.

Offensively, the Indians certainly have not been clicking to start the season thus far. Carlos Santana is leading the way hitting .471/.526/.529 with 5 runs batted in and 3 runs scored, but after him, the next highest hitter (Hanley Ramirez) is hitting .235. Even worst, the third highest batting average is hitting a paltry .182. In terms of long balls, Hanley Ramirez is the only one as he currently has 2 home runs on the season. The Indians could really use Jose Ramirez to get going as he is hitting just .158/.200/.211. Especially with Francisco Lindor out until the end of April, the Indians are going to have to find consistent offense from somewhere.

Pitching Will Rule The Opener

With both offenses struggling thus far in the season, this one is going to come down to pitching. While I respect the first start that Anibal Sanchez had, Trevor Bauer is a far superior pitcher as a whole. He has top of the rotation stuff and the only reason his name is not more recognizable is the fact that Corey Kluber is also in the rotation. I expect Bauer to dominate against a weak Toronto offense and I expect that the Indians will be able to squeak out a couple runs, which is possibly all they will need in this matchup. For my money, I am taking Trevor Bauer and the Cleveland Indians at -175 in this one.