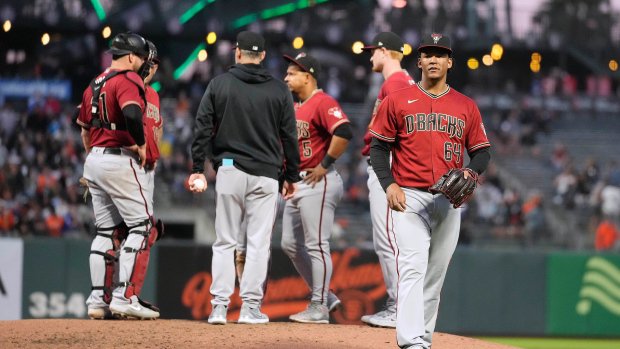 Later today, the Arizona Diamondbacks could cement a place all to themselves in MLB history. And it’s not the good kind of history, either.

Last night’s 13-7 loss to the San Francisco Giants was Arizona’s 13th straight road loss overall and their 22nd straight loss on the road. That tied the record for most consecutive road losses in MLB history, a record previously held by the 1943 Philadelphia Athletics and 1963 New York Mets.

Today, the Diamondbacks will hit the diamond for their series finale against the NL West-leading Giants looking to avoid owning the record alone.

Arizona Diamondbacks vs San Francisco Giants odds are via FanDuel Sportsbook as of Thursday, June 17 at 10:10 am ET.

A breakdown of Arizona Diamondbacks vs San Francisco Giants betting picks can be found at Betting News’s MLB matchup page for the game.

How did the Diamondbacks get here?

A big part of that run was road success, as they went 6-1 on the road in that 13-game stretch. After securing their series win over the Rockies, the Diamondbacks set out for road series against the Miami Marlins and New York Mets with a respectable 9-8 road record.

And then the bottom fell out.

Overall, it has just been an ugly stretch. Along with their rough road run, they have gone 5-14 at home over the last month and a half. All told, they are 5-36 in their last 41 games, putting them at 20-49 for the season.

As it stands, the Diamondbacks are on pace to go 47-115 this season. Yikes.

Fade the Diamondbacks on the run line until further notice

Many things factor in such a streak, but a few things stick out for the Diamondbacks. They have not produced enough offensively, which has negated a number of solid pitching outings. And when they have produced offensively, it has typically been negated by poor pitching.

Obviously the fewer runs you allow, the more of a chance you are likely to have in most circumstances. But the Diamondbacks have been much too generous.

What does this all mean from an MLB betting perspective?

Well, when things are rarely matching up well with offense and pitching, one-run games are not going to be overly frequent.

Only 17 of Arizona’s 69 games this season have been decided by one run, and they are an MLB-worst 2-15 in one-run games. That is pretty glaring in itself, but that leaves 34 losses by multiple runs. And 17 of those 34 losses have come during the record-tying road losing streak.

With those numbers in mind, even if the streak comes to an end today, the value is on fading the Diamondbacks on the run line.

This isn’t a “fade until further notice” kind of recommendation, obviously. That would be an irresponsible suggestion, even with their current futility.

Monitoring matchups and sizing up the opposition are a must, but until the Diamondbacks have a turnaround–which doesn’t appear to be imminent, but neither did their slide–there will be value both home and away.

And the upcoming schedule lines up well for there being frequent opportunities to take [insert Diamondbacks opponent] -1.5, as Arizona has a pretty brutal schedule leading up to the All-Star break.

The Diamondbacks’ road losing streak may well end today. Or it may continue past the All-Star break. But for now, the best move is clearly to strike while the iron’s hot, back Arizona’s opponents when the opportunity presents itself, and cash in.