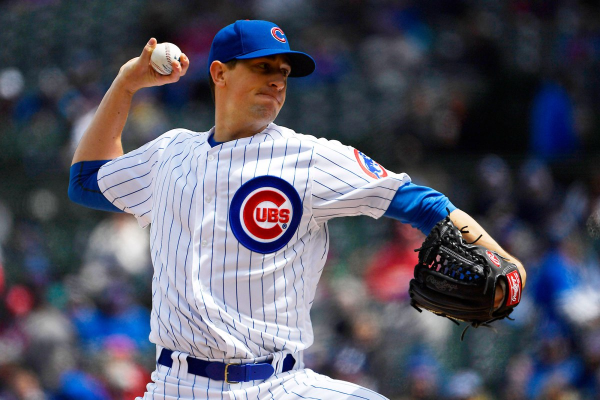 No matter who you are a fan of, when it comes to baseball rivalries, it doesn’t get much better than the St. Louis Cardinals and Chicago Cubs. On Sunday Night Baseball, these two will face off for the last of a three-game series when the Cardinals (31-31) square off with the Cubs (36-27) at Wrigley Field. After being swept by the Redbirds last weekend, the Cubs hope to repay the favor with a series sweep Sunday after taking the first two games 3-1 and 9-4.

The pitching matchup for Sunday will feature Adam Wainwright (5-5, 4.34 ERA) going for the Cardinals against the Cubs’ Kyle Hendricks (6-4, 3.16 ERA). First pitch for this contest is scheduled for 7:08 pm ET.

The moneyline for this one features the St. Louis Cardinals at +148 and the Chicago Cubs -158.

Offensively, the Chicago Cubs have been the more prolific team of the two this season. They currently rank eighth in major league baseball in runs per game at 5.18 (although at home they are averaging 4.73). For the Cardinals, they slip to 17th in the majors with 4.72 runs per game (4.54 on the road).

On the pitching side, it is once again the Cubs who come in with the advantage when it comes to staff ERAs. The Cubs come in with an ERA of 3.83 overall (3.06 at home), which is good for sixth in all of baseball. The Cardinals come in at a respectable 12th with a 4.23 ERA (however that number explodes to 5.07 on the road).

Cardinals Try To Salvage A Win

After putting up four runs in the first inning on Saturday, including home runs by Harrison Bader and Marcell Ozuna, the Cardinals thought they would roll to a victory over Jon Lester and the Cubs. Unfortunately for Cards’ fans, they never scored again, and their pitching staff allowed nine runs to score when it was all said and done.

Trying to stop the bleeding for the Cardinals on Sunday will be veteran Adam Wainwright. On the season, he is 5-5 in 12 starts with a 4.34 ERA, 1.37 WHIP and opponents are hitting .251 against him. In 66 1/3 innings, he has allowed 61 hits, 32 earned runs, nine home runs and has struck out 59 versus 30 walks. In his last outing, he was outstanding against the Cubs, going eight innings, allowing no runs on two hits and striking out eight. Of note, though, was a whopping seven walks he allowed in the 2-1 victory.

At 36-27, the Cubs currently sit in first place by mere percentage points (.571 vs. .569) over the Milwaukee Brewers and sit 4.5 games ahead of St. Louis. Knowing that this will be a dogfight to the end, the Cubs will look to pick up every victory they can.

Looking for the win on Sunday will be right-hander Kyle Hendricks. On the season, he is 6-4 in 12 starts with a 3.16 ERA, 1.10 WHIP and opponents are hitting .242 against him. In 77 innings, he has allowed 71 hits, 27 earned runs, seven home runs and has struck out 71 versus just seven walks. In his last outing, a 6-3 win over the Rockies, Hendricks went seven innings, allowing three earned runs on six hits and one walk while striking out 10.

This whole season has shown why the Cubs and Cardinals are one of the best rivalries in professional sports. After the Cardinals swept the Cubs in St. Louis last weekend, the Cubs have the opportunity to return the favor on Sunday, and behind Kyle Hendricks, I think they get it done.

Don’t get me wrong, last weekend Adam Wainwright was downright filthy against the Cubs, but I have my reservations that he can do it two starts in a row. On the other hand, Kyle Hendricks has been the ace of the Cubs lately, as he has gone 5-0 with a 2.09 ERA over his last 50+ innings. Again, in a series that features these two teams, anything is possible, but for my money, I am taking the Cubs at -158.