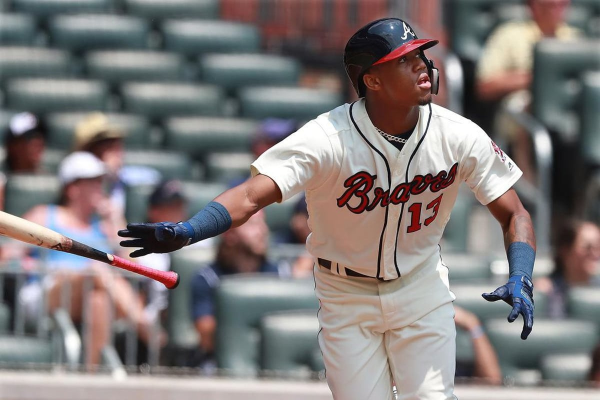 It is a battle of NL East vs. NL West on Monday night as the Atlanta Braves (18-16) travel to Dodger Stadium to start a three-game series with the Los Angeles Dodgers (22-14). For the Braves, they are coming off of a successful weekend sweep of the Miami Marlins, capped by a 3-1 victory on Sunday. In the win, Julio Teheran went 6 innings of scoreless ball while Nick Markakis hit his third home run of the season.

For the Dodgers, they were also on the verge of a three-game sweep over the Padres until Kenley Jansen blew a ninth-inning save by giving up a walk-off grand slam to Hunter Renfroe to drop the finale 8-5. In the loss, Chris Taylor and Max Muncy homered for the Dodgers while starter Kenta Maeda went 6 innings, allowing 4 earned runs.

The moneyline for Monday’s game is set at the Atlanta Braves +132 and the Los Angeles Dodgers -142. The over/under for runs scored is set at 7.5.

Acuna Jr. Should Be Back

After leaving Saturday’s contest with Miami early due to back tightness, Ronald Acuna Jr. sat out of the finale on Sunday. However, it appears that it was likely more precaution than concern as manager Brian Snitker expects the outfielder back in the lineup Monday. On the season, Acuna Jr. is hitting .294/.396/.487 with 6 home runs, 20 runs batted in and 20 runs scored. In addition to Acuna, Nick Markakis (.333/.430/.496 with 3 home runs) and Freddie Freeman (.298/.410/.504 with 6 home runs) have also had strong starts to the season.

On the mound for the Braves on Monday will be righty Kevin Gausman. In his last start, Gausman only threw 28 pitches as he was ejected for intentionally throwing at Miami pitcher Jose Urena, who had issues with the Braves stemming from last season when he plunked Acuna Jr.

Will Bellinger Be Back?

Just as the Braves are getting back one of their big sluggers, so too might the Dodgers. Cody Bellinger, who has set the league on fire thus far this season, has sat out the last few days with shoulder issues. There was a belief that he would play on Sunday, but instead, he simply did exercises and throwing, which leads many to believe Monday will be the day that he returns.

In his last outing, a 10-3 win over the San Francisco Giants, Buehler went 5.1 innings, allowing 6 hits, 3 earned runs and struck out 6. He will look to build off of this outing when he takes on the Braves Monday.

This one comes down to the starting pitching for me. While his earned run average is not exceptional, I still tend to trust Walker Buehler over Kevin Gausman. Throw on top of that the fact that some of the Dodgers have had success against Gausman (David Freese and Justin Turner have homered), while only one Brave has a hit off of Buehler (Markakis is 1 for 2 against him) and it just seems to point the way of the Dodgers.

Also, the Dodgers rank first in scoring at home (6.06 runs per game), so I think it could be a rough game for Gausman. I will say, the blowup by Jansen is concerning as his availability might be in question Monday (he threw 20 pitches Sunday), but I still think ultimately the Dodgers come out ahead. For my money, I am taking Los Angeles at -142.