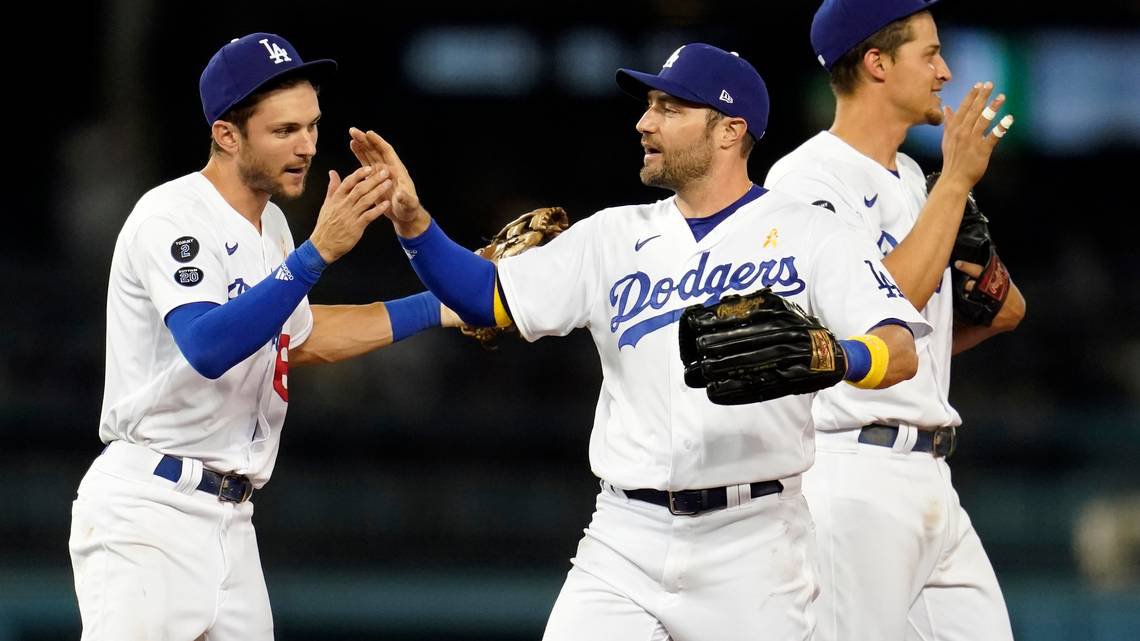 Often enough, sports do not play out according to preseason odds and prognostications. At one point, it looked like that could be the case for the Los Angeles Dodgers, who dominated preseason MLB betting odds. But after months of playing catch-up, the Los Angeles Dodgers are finally back in first place in the NL West. Will they be there after this weekend’s showdown in San Francisco with the Giants?

The Dodgers have battled injuries, off-field issues, themselves, and the surprising San Francisco Giants throughout the season. But with a month left in the regular season, the Dodgers are right where they were expected to be. They took over first place all alone on Wednesday night by completing a sweep of the Atlanta Braves, but this weekend’s series begins with the Dodgers and Giants tied atop the NL West standings, as the Giants averted a four-game sweep against the Milwaukee Brewers with a win yesterday.

Any series between the Dodgers and Giants is big, but the stakes are even higher here. Who will end tonight with solo possession of first place?

Los Angeles Dodgers vs San Francisco Giants odds are via FanDuel Sportsbook as of Friday, September 3, 2021 at 1:30 p.m. ET. Want to see betting odds from several top online sportsbooks for the day’s other MLB matchups? Check out our MLB odds.

Walker Buehler is on his way to winning the NL Cy Young, and Julio Urias leads the league in wins. But overall, the Dodgers have not had the year that they would have expected to going in. But the Max Scherzer trade has been massive, and it doesn’t hurt to have Price to turn to as well.

Price isn’t at the height of his powers anymore, and in his 11 starts this season, the longest he has pitched is 5.2 innings. But his experience in big games in September and October may prove to be very valuable for the Dodgers, whether as a spot starter or out of the pen.

That said, in making regular starts over the last couple of months, he has had only one unblemished start, which came against the Arizona Diamondbacks on July 9. In six of his other seven starts, he has given up at least two runs. That includes a July 29 outing in San Francisco, in which he allowed four runs (three earned) in 4.1 innings in a 5-0 loss.

That should be encouraging for the Giants, who were shut down offensively by the Milwaukee Brewers for the better part of four games. But they stepped up in a big moment yesterday, mounting a two-out rally against Brewers reliever Devin Williams and plating four runs to break a 1-1 tie. That is the kind of thing that can get a run started, and the Giants will hope that is the case for them.

Will DeSclafani’s Struggles Against the Dodgers Continue Tonight?

Some early offense would help take some pressure off of DeSclafani, who has not pitched well against the Dodgers this season.

In five starts against the Dodgers, he is 0-3 with a 9.43 ERA, surrendering 22 runs, 31 hits, 12 walks, and six homers in only 21 innings. The Dodgers have hit .341 against DeSclafani this season. Against all other opponents, DeSclafani is 11-3 with a 2.29 ERA in 20 starts. It does have to be mentioned that ten of those runs and nine of those hits came in one start, but even if you were to take that one start away, he is still 0-2 with a 5.97 ERA in the other four starts. And he has managed more than five innings only once in those five starts.

DeSclafani could use a good outing tonight, and it’s not just because he is pitching against a team he has struggled mightily against. At the All-Star break, he was 10-3 with a 2.68 ERA. Since the break, he is only 1-3 with a 6.09 ERA in seven starts. Last time out, he allowed two homers, three runs, and six hits in only three innings against the Braves, taking the loss in the Giants’ 9-0 series-losing setback last Sunday.

As mentioned above, DeSclafani has had a pretty rough go of it against the Dodgers this season, and the second half of the season has also not been too kind to him either. The Giants might score some early runs against Price, but the Dodgers should get their share as well.

The Giants have been formidable at Oracle Park this season, but they were outclassed against the Brewers, and they are matching up with the Dodgers at the wrong time. This is one the Giants could really use with Urias and Buehler pitching Saturday and Sunday, but I like the Dodgers in this spot tonight.

The 2022 French Open is underway at Stade Roland Garros in Paris, France, and we are already almost through the first week of play. Tomorrow, the remaining third-round matches will take place, after which the men’s and women’s singles draws will be down to their final 16 contenders. In both men’s and women’s singles, there END_OF_DOCUMENT_TOKEN_TO_BE_REPLACED