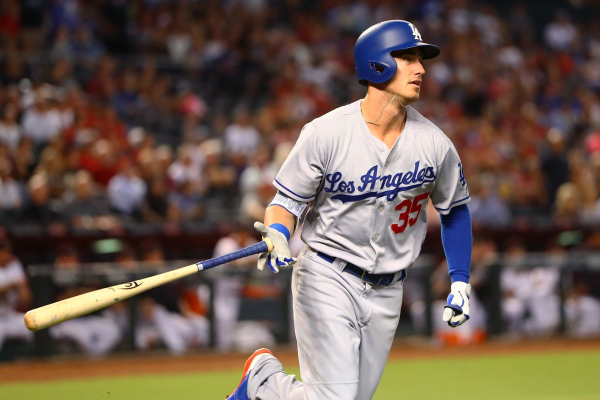 Sunday Night Baseball features an NL West showdown when the Los Angeles Dodgers (7-2) travel to Coors Field to take on the Colorado Rockies (3-6).  The Dodgers will be looking to sweep the series Sunday as they won the game Friday night 10-6 and Saturday’s contest 7-2.  In Saturday’s contest, Cody Bellinger stayed sizzling at the plate, going 2-4 with a run batted in and 2 runs, as well as a double and a triple. DavidDahl led the Rockies in the loss with his second home run of the season, ultimately going 3 for 4 with a run and 2 runs batted in.  The pitching matchup for the finale of the 3-game series will feature the Dodgers’ Julio Urias (0-0, 0.00 ERA) matching up with Colorado’s Chad Bettis (0-1, 9.53 ERA). First pitch is scheduled for 8:37 pm ET.

The money line for Saturday’s game is set at the Los Angeles Dodgers -145 and the Colorado Rockies +135.  The over/under on runs scored is set at 11.

Los Angeles Looks To Make It Five In A Row

The Los Angeles Dodgers are rolling right now and they are being led by the sensational play of Cody Bellinger.  The Dodgers have not even hit 10 games yet and Bellinger already has 6 home runs, 17 runs batted in and has scored 13 runs. Throw in a double and a triple and his slash line is .425/.452/.950 with a 1.402 OPS.  The scary thing for opponents, though, is that he isn’t the only player hitting well.  Austin Barnes (2), Kike Hernandez (3), Joc Pederson (3) and MaxMuncy (2) all have multiple home runs.  In fact, as a team, they have 22 home runs and yes, once again, they have only played 9 games.  With the way that they are hitting the ball right now and throw in playing at Coors Field, it could be another high-scoring affair.

On the mound for the Dodgers will be lefty Julio Urias.  Although he is ultimately destined for a bullpen role to limit his innings, he is currently enjoying a spot in the rotation.  In his first outing, Urias went 5 innings of 3-hit ball with no walks and 7 strikeouts in a 4-2 loss to the San Francisco Giants.  He pitched well enough that he should have had a better outcome, but the bullpen couldn’t hold a lead for him in the 6thand 7thinning s of that one.  No one on the Rockies has a large sample size against Urias, but it is worth noting that Nolan Arenado is 3 for 4 against the lefty.

At 3-6, this isn’t quite the start to the season that the Rockies had envisioned.  After so much optimism surrounding the team with the extensions of Nolan Arenado and GermanMarquez, the team had hoped to back that up with solid play on the field.  Trying to stop the bleeding is righty Chad Bettis, who had his own rough outing in his first start.  In that start, a 7-1 loss to the Tampa Bay Rays, Bettis went 5.2 innings, allowing 6 earned runs on 7 hits and 2 walks, while also striking out 5.  He allowed 2 home runs in that game, something that could be especially daunting if he doesn’t make adjustments to the Dodgers’ lineup.

On the offensive side, Colorado has been led thus far by outfielder David Dahl.  On the season, Dahl is hitting .353/.395/.647 with a 1.042 OPS.  He also has 2 home runs, 6 runs batted in, and has scored 4 runs.  While the Dodgers have been exploding for home runs, the Rockies have not.  Dahl has 2, Chris Iannetta has 1 and Trevor Story has 3, but that is it.  For Story, despite his 3 home runs, he is hitting just .212.  The player they would like to get going the most on the offensive side, though, is Nolan Arenado.  Through 9 games, Arenado is hitting just .229/.263/.286 with no home runs, 4 runs batted in and 3 runs scored.  If they can’t get their offense going and their pitching in check, though, it could be a long night for the Rockies.

This one really comes down to who is playing the best ball right now and that is definitely the Dodgers.  Their offense, led by Cody Bellinger, seems to be clicking on all cylinders and even though I doubt Urias goes unblemished in this one, I still like him as a starting option over Bettis.  Don’t be surprised if both sides, reflected in the fact that the over/under for runs scored is set at 11, put up runs but ultimately I like the Dodgers to come out ahead in this one.  For my money, I am taking Los Angeles at -145.