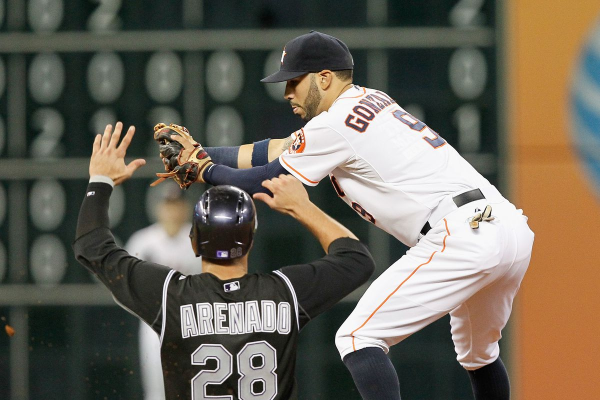 To say that the HoustonAstros have struggled at home lately would be a bit of an understatement. The Astros, who lost 5-1 on Tuesday to the Colorado Rockies, have now gone winless at home in over a month. The last time they won a game in Houston was on July 14th against the Detroit Tigers.

The moneyline for Wednesday’s game is set at the ColoradoRockies +178 and the HoustonAstros -190. The over/under for runs scored is set at 7.5.

With the NL West so tight (four teams are within five games of one another), the Rockies are right in the thick of it at only a game out. To try to keep pressure on the first place Arizona Diamondbacks, Colorado will turn to Tyler Anderson in Wednesday’s contest. On the season, Anderson is 6-4 with a 3.94 ERA, 1.20 WHIP and opponents are hitting .229 against him. In 137 innings, he has 127 strikeouts, 48 walks and has allowed 21 home runs. Anderson’s last two starts have definitely shown that he can be inconsistent at times. On August 4, against the Brewers, he went 4 innings, allowing 7 earned runs and striking out 4. In his last outing, August 9, he went 6 innings, allowing only 1 earned run and striking out 6. The Rockies will hope that he can string back-to-back quality starts on Wednesday against a struggling Astros offense.

For whatever reason, the HoustonAstros have consistently played better on the road than at home over the last couple seasons. Over the last month, it really couldn’t get much worse. A month…no wins at home for an entire month. Sure, there have been injuries that have affected the lineup. Jose Altuve, George Springer and Brian McCann are still out. CarlosCorrea has looked sluggish since coming off of the disabled list. However, that still doesn’t excuse a team that just finished a 6-2 road trip, all without those players, from the way they have played at home. Unfortunately for the pitching staff, that means they have to be almost perfect.

Gerrit Cole will take his turn at trying for perfection Wednesday. On the season he is 10-5 with a 2.75 ERA, 0.99 WHIP and opponents are hitting only .187 against him. In 153.2 innings, Cole has 207 strikeouts, 50 walks and has allowed 14 home runs. Despite his solid numbers, Cole has lost his last three starts. In those starts he has gone a combined 19 innings, allowing 9 earned runs and striking out 21. He will look to right the ship for the Astros Wednesday night.

I really struggle with this one. Based off of pitching matchups, I would generally pick the Astros all day long. The only problem is their offense has just been so bad at home. Until they show some signs of life on the offensive side, I just have a tough time picking them. Throw on top of that the fact that Colorado has been playing good ball, they have some hitters who have gotten to Gerrit Cole and the fact that Cole has not been quite as sharp lately and Colorado becomes a good value pick. With that in mind, take the Rockies at +178.