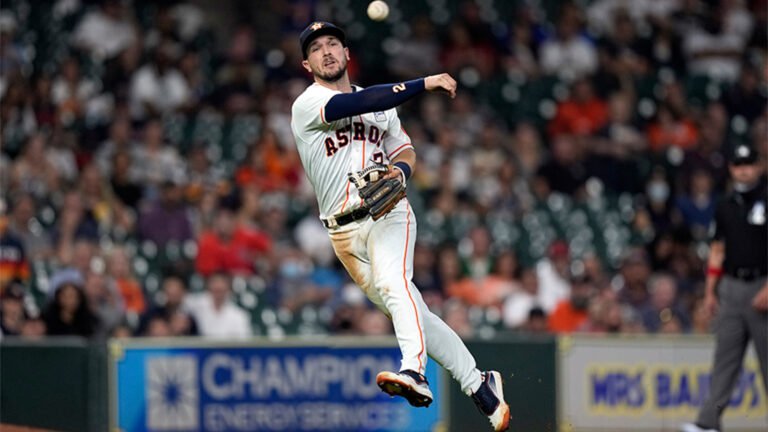 Lone Star State rivals meet for the first time this season this week as the Houston Astros visit the Texas Rangers for a four-game series. Tonight’s matchup at Globe Life Field in Arlington sees Framber Valdez take the hill for the Astros opposite Dane Dunning for the Rangers.

Neither team has had a stellar start to the season, as both teams come in under .500 and looking up at the Seattle Mariners, Los Angeles Angels, and Oakland A’s in the AL West standings. So, winning this week’s series will certainly be a boost for either team. How will the opener play out?

Can the Astros Get Back on Track?

The Astros started out the new season on a good note, winning four of their first five games. But they have hit a rough patch, winning only three of their last ten games.

They enter this series with consecutive series losses to the Mariners, Angels, and Toronto Blue Jays, with the latter two coming at Minute Maid Park. Given that Houston had the fifth-best home record in the majors last season at 51-30, that is an especially undesirable start.

Early struggles at the plate have been the glaring issue for the Astros, who led MLB in batting average (.267) and runs per game (5.33) last season. Through fifteen games this season, Houston is hitting only .209 as a team and averaging just 3.6 runs per game.

Chas McCormick (.324) and Michael Brantley (.316) are both hitting over .300, while Alex Bregman is off to a decent start (.294, three homers, 12 RBI). And rookie shortstop Jeremy Pena has three homers and ten runs scored, which is a pretty solid start for a rookie.

But the numbers make for rough reading otherwise. Jose Altuve, who went on the injured list last week with a hamstring injury, is hitting only .167, while Yordan Alvarez (.158) and Kyle Tucker (.127) are in the mire early as well.

But it is still early, and they do at least head into this series on the right foot. Yesterday, they had eight runs and 11 hits in an 8-7, 10-inning win over the Blue Jays, salvaging something out of the series after losing the first two games.

McCormick, Brantley, Bregman, and Gurriel each had two hits apiece, while Brantley and Pena each hit a two-run homer, with Pena’s blast walking it off in the bottom of the tenth.

It has been a miserable month for the Seattle Mariners, and things are unlikely to get any better tonight as they welcome AL Cy Young Award favorite Justin Verlander and the Houston Astros to T-Mobile Park. After just missing out on the MLB playoffs last season, the Mariners entered this season with hopes of finally END_OF_DOCUMENT_TOKEN_TO_BE_REPLACED