Cole Halfway Out The Door To Next Destination Following World Series 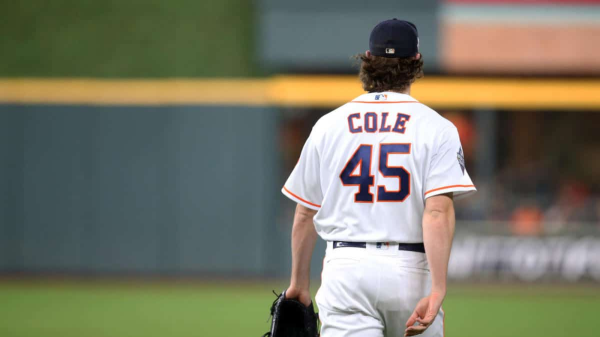 With a two-run lead heading into the seventh inning of Game 7 in the World Series, the Houston Astros had a warmed-up Gerrit Cole waiting in the bullpen. Instead of opting to go to the AL Cy Young Award favorite, Houston stuck with Zack Greinke, who allowed a home run to Anthony Rendon, and then brought in Will Harris, who gave up the eventual game-winning two-run homer to Howie Kendrick.

So, Cole’s final game in an Astros uniform, despite never entering the game, ended with the Nationals celebrating a World Series title on Houston’s field.

Now, Cole appears to have one foot out the door after having thanked the fans and organization, as well as kicking off postgame interviews by saying, “I guess I’m a representative of myself” after an awkward exchange with a team official in which Cole stated, “I’m not employed by the team.”

All of the above leads up to Cole’s becoming a free agent this offseason, with the star pitcher now expected to receive one of the largest contracts for a pitcher in MLB history.

As we reflect on an incredible year for the Astros right-hander, let’s look ahead at which organization Cole might be throwing for once Opening Day comes around.

Between Cole and co-ace Justin Verlander, the Astros had the pleasure of sending out the two American League Cy Young Award favorites to start four games of the World Series. Although Verlander led the Cy Young betting odds race throughout the year, the regular season ended with Cole as the favorite with -140 odds, while Verlander sported +100 odds.

Cole now looks most likely to win the Cy Young, and it would be a well-deserved award for the man who didn’t lose a game between May and Game 1 of the World Series.

After an outstanding second half of the regular season, Cole was nearly unhittable throughout October baseball. In his five postseason starts, Cole went 4-1 with 47 strikeouts in 36 2/3 innings pitched and an ERA of 1.72.

The 29-year-old spent two seasons in Houston after playing his first five seasons in a Pirates uniform. Of his seven years in the majors, 2019 marked career highs for Cole in ERA, wins, innings pitched, WHIP, and strikeouts.

It wouldn’t be hard to argue that Cole is the best pitcher in baseball right now, which is why he’s going to land a huge deal this offseason.

Amidst reports that Cole would prefer to play for a California team, it’s worth noting that the most vital part of this process is likely to be the money involved. In the case of most free agents, the highest bidder gets the player.

However, you never really know what an individual player is thinking or feeling as contract talks develop, so rather than speculating on where Cole might be the best fit, let’s allow the odds to do the talking for us.

According to the odds, there’s a clear top five of potential landing spots for Cole, while the Astros are longshots with the 10th-best odds of +2500 to bring the pitcher back to the club.

Atop the list are the Angels with odds of +300 for getting the ace. If rumors of Cole’s preference of playing in California are true, the Angels being the favorite certainly makes sense.

Speaking of California, the Dodgers would love to have Cole and build the best rotation in baseball with their sights set on finally overcoming their postseason failures. With odds of +800, the Dodgers have the fifth-best odds of signing Cole.

With a daunting lineup and holes throughout the pitching staff, a Yankees team that’s never afraid to throw money across the table wouldn’t be a shocking winner of the Cole sweepstakes.