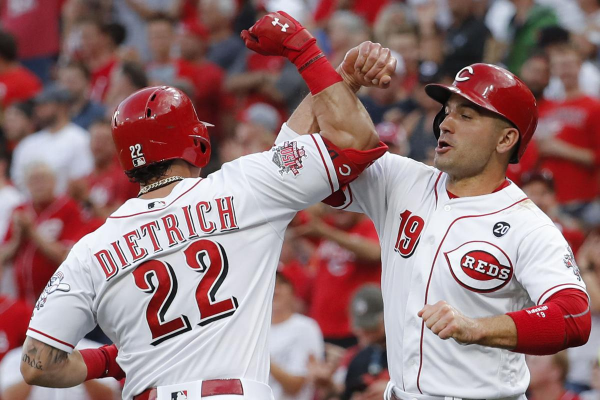 The Cincinnati Reds and Milwaukee Brewers begin a four-game weekend series in Milwaukee Thursday. Milwaukee has taken four of the five previous meetings between the National League Central rivals this season.

The Milwaukee Brewers (40-34) are currently a half-game behind the Chicago Cubs for first place in the NL Central. Milwaukee is coming off a rough series against the San Diego Padres where they were swept on the road. They were only able to score one run through the first two games; then, when the bats got going, and they scored seven in the third game of the series, San Diego responded with eight runs to complete the sweep.

Starting on the bump for the Milwaukee Brewers will be Jimmy Nelson. Jimmy has only pitched a total of seven innings so far this season, and things have not gone as planned so far. Nelson will be hoping for a very different start from his last game after giving up four runs on five hits in just four innings. With a 10.29 ERA and 0-1 record, Nelson will be looking to at least get a solid start and keep the Brewers in the game.

Although Milwaukee has been in a slump lately, there is no doubt they are a top threat in MLB and have the roster to shut down any team they face. 2018 NL MVP Christian Yelich currently leads the team in RBI, home runs, and batting average. Yelich also leads the entire National League in slugging percentage.

The Cincinnati Reds are currently 34-38 this season. The Reds have won four straight games, including sweeping the very tough Houston Astros at home in their last three. Cincinnati has had some very positive things to take away from this season so far, with their biggest issue being that they play in the stout National League Central. The Reds added some pieces this past offseason that have definitely helped their cause, but it will take a lot more to compete with the top dogs in the division.

Veteran Tanner Roark will get the start for the Reds to start the Milwaukee series. Roark is 4-6 with a 3.63 ERA and 74 strikeouts so far this season. In his last outing, the 32-year-old Roark took the loss against the Rangers by giving up four runs in seven innings. The Reds defense offered him no help as they had three errors behind him. Tanner is now on a three-game losing streak going into Thursday’s start.

As I said before, the Reds added some key pieces to their roster this past offseason that have helped the team show improvement already this season. While the biggest name in the group was former Dodgers outfielder Yasiel Puig, he has only posted a .226 batting average and 13 home runs. The big surprise this year has been their second baseman, Derek Dietrich. Dietrich has 18 home runs on the season, which leads the team, and also held the league lead earlier in the season. These are the kind of players the Reds are going to need to keep stepping up to help get their team to the next level.

Despite the Brewers having the better record and home-field advantage, I like the hot team to beat the cold team in a tight divisional matchup. I expect the Reds to take game one of the series and close the gap in the NL Central, which promises to be tight all year long.