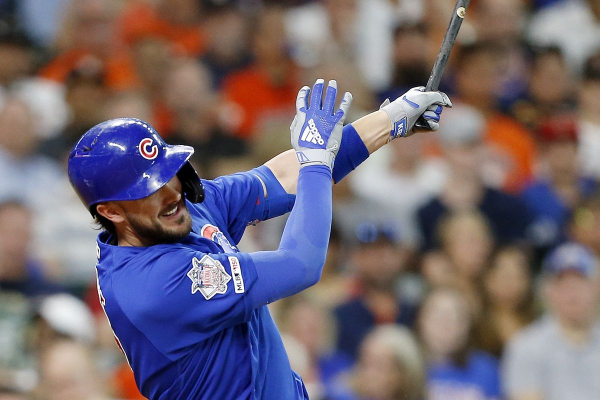 After a three-and-a-half-hour rain delay had the Chicago Cubs (31-25) and St. Louis Cardinals (29-28) playing until after midnight Saturday night into Sunday morning, it will be a quick turnaround as the two are set to square off again Sunday afternoon with a 2:15 pm ET start time from Busch Stadium. For the Cardinals, the short turnaround may be worth it as they look to sweep their division foes, while the Cubs will look to simply salvage the last game of the three-game series. To do so, they will send Cole Hamels (4-1, 4.02 ERA) to the mound to square off with the Cardinals’ Adam Wainwright (4-5, 4.94 ERA).

The moneyline for this one features the Chicago Cubs at -103 and the St. Louis Cardinals also at -107. The over/under on runs scored is set at 9.

Offensively, the Chicago Cubs have come in as the stronger of the two teams as they currently rank seventh in the majors in runs per game at 5.25 (they are averaging 5.93 on the road). For the Cardinals, they come in at the middle of the pack at 15th overall with an average of 4.89 runs per game (5.1 at home).

On the pitching side, the Cubs once again come in higher when it comes to staff ERA. For the Cubs, their earned run average is 3.88 overall, although it does jump up to 4.76 on the road. For the Cardinals, they come in at 14th overall with a 4.38 ERA (3.73 at home).

With just three games separating the Cubs, Cardinals and Milwaukee Brewers, the NL Central is likely to be a battle all season long. After relinquishing control of the division lead to the Brewers (by mere percentage points), the Cubs look to get back on track Sunday. To do so, they will turn to Cole Hamels.

On the season, Hamels is 4-1 in 11 starts with a 4.02 ERA, 1.36 WHIP and opponents are hitting .248 against him. In 62.2 innings, he has allowed 59 hits, 28 earned runs, seven home runs and has struck out 60 versus 26 walks. In his last outing, a 6-5 loss to the Astros, Hamels went just four innings, allowing seven hits, four walks, six earned runs and struck out no one. He will look to improve on this line Sunday against the Cards.

For Bryant, he is hitting .340/.446/.734 with 10 home runs, 21 runs batted in and 25 runs scored in that same time. Especially if Javier Baez, who sat out Saturday’s game with his ongoing heel issues, has to miss any time, the Cubs certainly need this duo to keep hitting.

Cardinals Working Their Way Back

The Cardinals really have looked like they have been spiraling over the last few weeks, but with the Cubs and Brewers only playing mediocre baseball and after having taken the first two games of this series, their aspirations of an NL Central crown are still very well alive. Trying to help claw even further back into the race on Sunday will be veteran Adam Wainwright.

On the offensive side, Paul Goldschmidt has hit well over the last 30 days. Even though his power isn’t necessarily there (just two home runs and seven runs batted in during that stretch), he is making good contact as he is hitting .290/.383/.366.

In terms of power, that department has been led by Marcel Ozuna as of late. In the last 30 days, he is hitting just .204/.370/.345, but does have six home runs, 21 runs batted in and 15 runs scored. Still, to match the Cubs’ offense, the Cardinals will need production from all parts of the lineup.

I do think that runs will be scored in this one. Both teams have players who have had success against the opposing pitchers. For the Cardinals, Ozuna is hitting .304 in 23 at-bats against Hamel with two home runs, while Matt Carpenter is hitting .417 in 12 at-bats.

For the Cubs, Willson Contreras, Daniel Descalso, Anthony Rizzo and Kris Bryant have all homered off of Wainwright in their careers. Ultimately, this one will come down to who can outslug the other, and when that is the parameters of the bet, I have to lean towards the Cubs. I know they have been in a funk, dropping the first two games of the series, but at -103, I like Chicago to salvage the last game of the series.