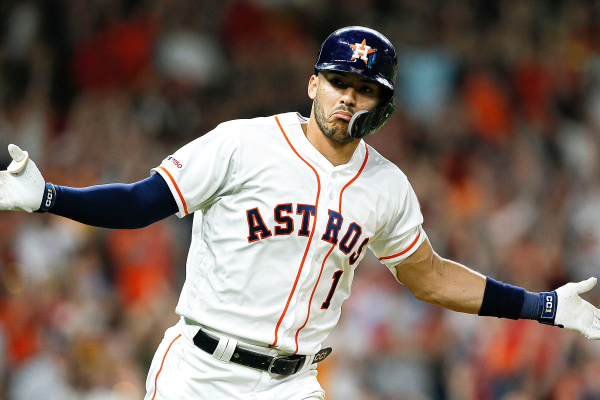 Tuesday features the second of a three-game interleague series between former division foes in the Chicago Cubs (30-22) and the Houston Astros (36-19). On Monday, the Astros were able to take game one behind a stellar performance by Gerrit Cole, who went six innings, allowing three hits, one walk, and two earned runs while striking out 12. The Cubs made it interesting late, though, as both Addison Russell and Albert Almora Jr. homered off of closer Roberto Osuna, but Osuna finally got the save by striking out Javier Baez for the fifth time in the game.

The moneyline for this one features the Chicago Cubs +125 and the Houston Astros -135. The over/under on runs scored is set at 9.5.

The Chicago Cubs have played solid all season and, at 30-22, hold a one-game lead in the NL Central over the Milwaukee Brewers. They are hoping to keep this lead and to do so, they will look to Jon Lester to take the ball on Tuesday. This season, Lester is 3-3 with a 2.68 ERA, 1.32 WHIP and opponents are hitting .274 against him.

In 47 innings, Lester has allowed 52 hits, 14 earned runs, six home runs and has struck out 47 versus 10 walks. In his last outing, a 9-7 loss to the Phillies, he probably had his worst outing to date. He went four innings, allowing seven hits, one walk and seven runs (only four were earned) while striking out five. He will look to rebound against the Astros on Tuesday.

Offensively, the Cubs may once again be without one of their best hitters. Kris Bryant was injured after he collided with Jason Heyward on Sunday and was being monitored by the Cubs. He sat out in Monday’s opener, and Tuesday is still in jeopardy for him, too. On the season, he is hitting .283/.405/.567 with 12 home runs, 34 runs batted in and 42 runs scored.

The hottest hitter over the last week for the Cubs has been Anthony Rizzo. In the last seven days, he is hitting .500/.563/.929 with three home runs, 10 runs batted in and eight runs scored. He opened up the scoring on Monday with a two-run home run off of Gerrit Cole.

Jose Altuve and George Springer are both out. Of lesser impact, the Astros are without Aldemys Diaz and Max Stassi, too. Still, they keep trudging along, having gone 11-4 in their last 15 games. Trying to get them another win on the bump Tuesday will be rookie Corbin Martin.

On the season, Martin is 1-1 in three starts with a 4.97 ERA, 1.58 WHIP and opponents are hitting .275 against him. In 12 2/3 innings, he has allowed 14 hits, seven earned runs and has struck out 12 versus six walks. In his last outing, a 4-0 loss to the Chicago White Sox, he went 3.1 innings, allowing six hits, one walk and four runs (three earned) while striking out three. He will look to try to keep a dynamic Cubs offense in check Tuesday.

Usually if a team said they were without stars George Springer and Jose Altuve, one would assume that they would go into a deep slump; however, with Alex Bregman, Michael Brantley, and Carlos Correa, the Astros are still flushed with offensive talent.

Cubs Even The Series

This one seems like an easy one to me. While Martin pitched well in his first outing, he has struggled since. On the other side, Jon Lester has pitched well all season and has kept the Cubs in just about every game he has pitched (admittedly his last one was a struggle). Especially with Jose Altuve and George Springer out, I am not sure that the Astros will be able to keep up with the Cubs.

Even with Kris Bryant likely out, I do think the Cubs will get to Martin and will put up some runs. Especially being slated as the underdogs on the moneyline, I am taking the Cubs at +125 in this one.