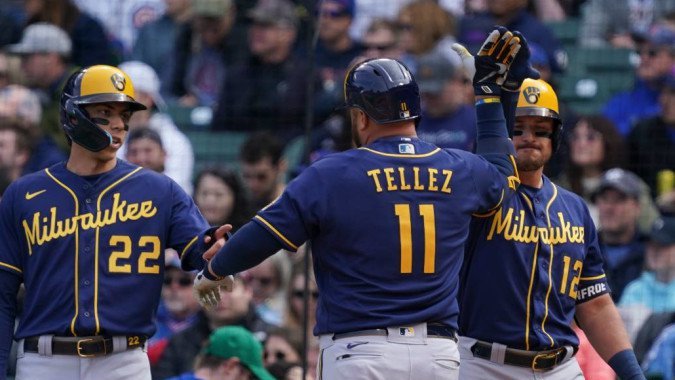 After letting a winnable game get away from them yesterday, the Milwaukee Brewers can’t afford another letdown this afternoon against the Chicago Cubs.

Seven runs will get the job done more often than not, but the Brew Crew blew three leads in an 8-7 loss in yesterday’s series opener at Wrigley Field.

With the St. Louis Cardinals winning their fifth straight game, Milwaukee is now four games back in the NL Central. Their loss also hurt in the NL wild-card standings, as they would have gained ground on the Philadelphia Phillies and San Diego Padres yesterday.

Game odds are via FanDuel. Odds from other online sportsbooks may also be included in this article.

This season has not quite panned out as hoped for Freddy Peralta, but he will have a key role to play down the stretch for Milwaukee.

In his third start since returning from an extended stint on the IL, he took the loss on Monday against the Los Angeles Dodgers. In four innings, he allowed just two hits and one run, but he walked four and threw 92 pitches.

A cleaner, longer outing is needed today, with the bullpen having logged three innings in yesterday’s game and 3.1 innings in Thursday’s win over the Dodgers.

The Brewers might not need to score seven runs again today, but a little run support will go a long way for Peralta.

That makes Stroman’s form encouraging if you’re backing the Brew Crew today in the Windy City.

Stroman has allowed two or fewer earned runs in 11 of his 16 starts this season, and he didn’t allow a single earned run last Monday against the Washington Nationals.

But he did give up four runs in 4.2 innings in the Cubs’ 5-4 loss, and he allowed at least three runs in each of his first three starts this month.

Also, the Cubs have allowed three or more runs in 12 of Stroman’s 16 starts this season, with only one win coming from that bunch. In the four Stroman starts in which they have allowed fewer than three runs, Chicago has posted a 3-1 record.

When good teams hit a rough spell, that can present spots where you can back them at more favorable odds than you might otherwise get.

Such an opportunity exists here, where Milwaukee is a small favorite but especially small at the spot we listed above.

As noted, Peralta has had a lot of success against the Cubs, and he is 3-1 with a 4.88 ERA in seven appearances (five starts) at Wrigley Field.

Since assuming a permanent role in Milwaukee’s rotation last season, Peralta has been backed with three or more runs 28 times in 38 starts, with the Brewers winning 23 of those 28 games.

With Stroman’s current form in mind, I like the Brewers to improve upon those numbers today.