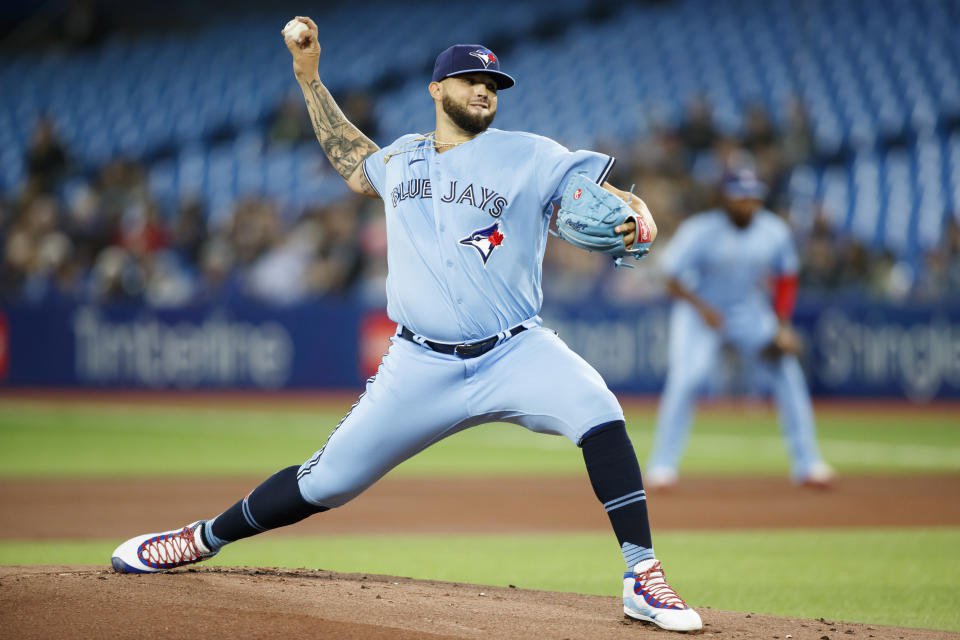 After picking up a much-needed win last night in Toronto, the Boston Red Sox will aim for a split of their four-game series with the Blue Jays this afternoon at Rogers Centre.

Entering last night’s game, the Red Sox had lost four straight and six of seven, including the first two games of their series against their AL East rivals. But six excellent innings by Michael Wacha and key contributions by the meat of their batting order led the Sox to a 7-1 win.

In this afternoon’s finale, Boston will be hoping for a solid outing on the mound from Garrett Whitlock, who has been sharp to open this season. So has Toronto’s Alek Manoah, who has positioned himself well in the AL Cy Young Award race with his early 3-0 start.

Listed odds are via FanDuel as of April 28 at 10:00 a.m. ET. This article may also feature odds from our other top reviewed and recommended sportsbooks.

Perfection on the Line as Manoah Toes the Rubber for Toronto

It has been less than a year since Alek Manoah made his Major League debut, tossing six shutout innings in a win over the New York Yankees last May 27.

A stellar debut does not always translate into sustained success, but little has gone wrong for Manoah since that standout showing at Yankee Stadium last year.

In 23 total starts in the majors, Manoah is 12-2 with a 3.05 ERA. And when he has been on the hill, it has meant good results for the Blue Jays an overwhelming majority of the time. Toronto is 19-4 in his 23 starts, with 11 straight wins entering today’s matchup.

Thus far in 2022, Manoah and the Blue Jays are a perfect 3-0 when he gets the ball, and he will be aiming for a fourth straight quality start to open the season.

Rogers Centre has especially been a fortress for Manoah thus far. In seven starts there, he is 5-0 with a 2.45 ERA and has a 0.796 WHIP in 44 innings pitched. Five of his seven home starts in Toronto have been quality starts, and he has allowed more than two runs in only one start (in which he was bailed out in one of the wildest games of the 2021 season).

Whitlock has also pitched really well so far this season, and Boston’s record as a team is not indicative of their talent level. But given how skewed all of these numbers are in favor of Manoah and the Blue Jays, Toronto’s current ML odds look like a bargain.

While the numbers of each starting pitcher may make the under the more appealing play on the surface, trends heavily favor the over.

Dating back to the start of the 2018 season, 20 of the last 26 Red Sox vs. Blue Jays matchups in Toronto (76.9 percent) have featured eight or more total runs. That includes the first three games of this series.

Additionally, since the Blue Jays returned to last season, 29 of their 45 games at Rogers Centre (64.4 percent), including 22 of the last 27 (81.5 percent), have featured eight or more total runs.

With percentages like those, a low total with favorable odds is not to be passed up. And if you are value shopping for the best number, the over 7.5 is at even odds at Caesars Sportsbook at the time of writing.

It has been a miserable month for the Seattle Mariners, and things are unlikely to get any better tonight as they welcome AL Cy Young Award favorite Justin Verlander and the Houston Astros to T-Mobile Park. After just missing out on the MLB playoffs last season, the Mariners entered this season with hopes of finally END_OF_DOCUMENT_TOKEN_TO_BE_REPLACED