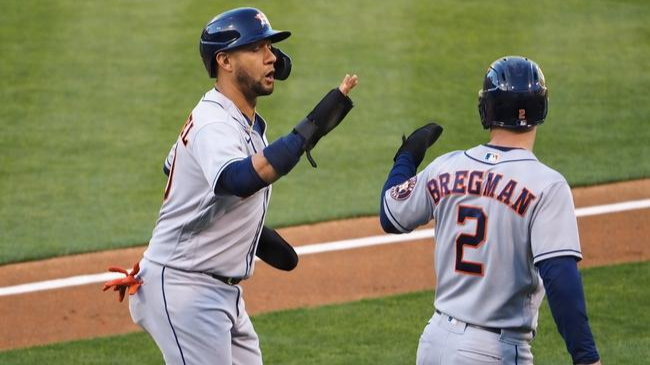 After the teams split on Tuesday and Wednesday, the AL West lead is at stake today in the Astros vs A’s series finale.

Entering the season, the Astros and A’s were penciled in as the AL West favorites, with little separating the two. With a quarter of the season down, there is minimal separation in the standings and in MLB futures odds. The A’s have a half-game division lead, while the Astros (-115) edge the A’s (+125) in AL West odds at FanDuel Sportsbook.

Will the A’s wrap up a series win at home? Or will Houston’s big bats have another big day in leading the Astros to a series win and first place? Let’s take a look at the matchup.

Astros vs A’s odds are via FanDuel Sportsbook as of Thursday, May 20 at 12:10 pm ET. For more MLB betting odds, check out our MLB odds, featuring updated odds from FanDuel and other top online sportsbooks.

After blowing a late lead to lose Tuesday’s series opener, the Astros struck back in a big way last night to even the series. It was tight until late, when the Astros scored three runs apiece in the seventh and eighth to win 8-1.

On the mound, Zack Greinke had his best outing in over a month. The veteran hurler allowed only one run and four hits in eight excellent innings. At the plate, the Astros racked up 15 hits, with Yuli Gurriel going 4 for 5 and driving in four runs.

It was Houston’s seventh win in their last eight games, and they are 18-8 since a sweep at the hands of the Colorado Rockies dropped them to 7-10 a month ago. And with a win today, the Astros would return to first place in the AL West.

The biggest reason for their success is an offense that has been firing on most cylinders most days. Other than the 1-9 stretch that brought about that season-worst mark, the Astros have had only one stretch in which they went more than one game without scoring five or more runs. Are the A’s destined for a home series loss today? The tea leaves read that way.

Coming into today, Houston leads the majors in batting average (.271), runs per game (5.3), hits (400), and walks (218). Also, the Astros are second in doubles (83). With Mike Trout sidelined for six to eight weeks with a calf strain, the door is open for the likes of Alex Bregman or Yordan Alvarez to really throw themselves into the AL MVP mix.

Today presents a rather favorable matchup for the Astros lineup, with a lefty on the mound for the A’s. Houston’s likely lineup has more righties than lefties in it, and the Astros are hitting .284 as a team against southpaws. Also, two of their three regulars who bat from the left side, Yordan Alvarez and Michael Brantley, are hitting above .300 against left-handed pitchers.

The Astros have already faced Irvin twice this year, and their success against him is another factor to consider in this matchup.

Irvin has pitched rather well for the most part since those two early starts, so he comes into this matchup in good form. But he also hasn’t had to face lineups of this caliber often. He did shut down the Toronto Blue Jays earlier this month, but that was in Oakland, and the Blue Jays have been vastly more productive in their current temporary home of Dunedin, Florida (.285 team batting average, 6.1 runs per game in 16 games) than elsewhere (.230 team batting average, 4.2 runs per game in 25 games).

MLB picks favor the A’s to hold serve at home and claim the series. However, with the Astros’ current run and their success against southpaws, the Astros are certainly a fair favorite and easily the better value here.