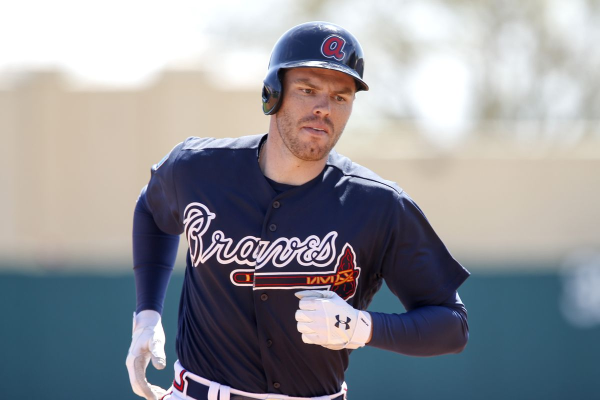 We are well into the second half of the Major League Baseball season and end-of-the-year award conversations have started up in both leagues. The Most Valuable Player is the big individual prize and there are a handful of players proving themselves worthy of the award. Last week we looked at the American League, so this week we’ll move over to the National League where the race is much more wide open, giving us the opportunity for some pretty nice payouts. However, you’ll have to make the right pick out of a stacked field.

Some of this players have been in the conversation since spring training while others are just happy to be considered. It takes a special season to win the MVP and these players are on the right track. Let’s see how they compare to each other and if there is any value to be had when placing a wager on the NL MVP.

Atlanta sure caused some head-scratching when they gave Freeman a big extension last year. They loved him and didn’t want the first baseman to get away so they ponied up the dough. They’re definitely reaping the benefits too as Freeman has responded with one of the best all-around seasons in memory. A quick comparison says his season is even stronger than that of franchise legend, Chipper Jones, when he took the award home. Freeman isn’t leading anyone statistical category, but he’s just filling up the stat sheet every night. The Braves find themselves a game or two removed from the playoffs as of today and will have to make a push to get in if Freeman wants a real chance for the award. That’s a lot of things that have to go right for only +150 so we advise to stay away from Freeman right now.

The Colorado Rockies third baseman is enjoying a huge year at the plate and is leading the National League in homers with 27 as of today. The Rockies are scoring a ton of runs with him in the middle of the order and are still in the Wild Card hunt. The playoff race is close in the NL especially on the Wild Card side so this MVP race could come down to the wire. The team with the winner of the MVP is pretty much always in the playoffs so if the Rockies can leapfrog one or two teams, Arenado will improve his chances. As for his odds, +300 is a nice number but he still has the feel of a long shot.

Another first baseman playing for another team in a tight race for a playoff spot. The ArizonaDiamondbacks are a scrappy contender this season and Goldschmidt has been their offensive catalyst. After a cold start and a tough June, Goldschmidt has been on fire and will need to stay hot to stay in the conversation. He has had such an up-and-down year it is hard to imagine him walking away with the trophy unless he really puts it together down the stretch. +450 is a fitting number just not one we would jump on.

The odds-on favorite to start the year, BryceHarper has had a bit of a let-down. Everyone thought he would be properly motivated being in a contract year and all but Harper has had a tough go this year. June was brutal and there has even been talk about trading him as the Nats’ playoff chances slowly slip away. While we don’t think that will happen but Harper is going to have to catch fire and lead Washington into the playoffs if he wants a chance at the hardware. +800 is a big payout, just not a good wager.

The Chicago Cubs have put together a big month and not only moved into first place in their division but also in the National League and Javier Baez has had a big part of it. One of the most exciting players in the MLB, Baez affects the game in so many more ways than just the stat sheet. Whether it is his defense or base-running, Baez plays the game hard and Cubs fans love him for it. He is a free swinger that can do a bit of everything and at +2000 has great value for a MVP future wager. The Cubs are only going to improve more and pound their way into the playoffs. Baez has the popularity, he has the flare, all he needs is some votes. With a few months to go, this longshot looks better and better everyday.