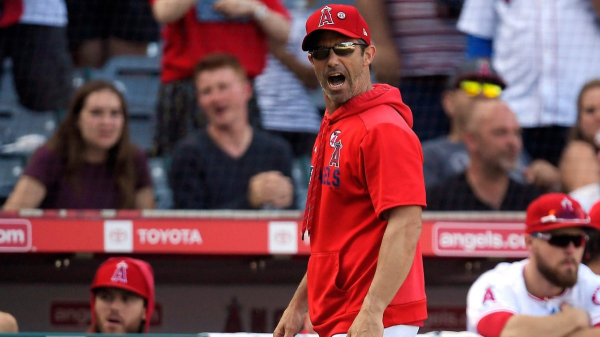 Before the start of the 2019 season, Brad Ausmus was hand-selected to deliver the Los Angeles Angels back to the playoffs and given a three-year contract to do so. After the Chicago Cubs and manager Joe Maddon cut ties, Ausmus is now out as manager in Los Angeles.

There’s now plenty of speculation that the decision to dump Ausmus after just one year was directly related to the fact that Maddon became available, with Angels owner Arte Moreno very fond of the man who led the Cubs to a World Series title.

For the time being, we’re left with a number of questions.

Was Ausmus given enough time in Los Angeles? Is a Maddon-Angels reunion a done deal waiting to happen? Would Maddon be the man to get the Angels back to October baseball?

We’ll learn more when Angels general manager Billy Eppler – who chose Ausmus to manage – addresses the media, but for now, we’re left to believe that the decision to part ways with Ausmus was an ownership-level choice with all signs pointing to Maddon.

What Ausmus Accomplished in 2019

It’s easy to feel that Ausmus hasn’t been given a fair shot after only getting to fulfill one year of a three-year deal, but he didn’t exactly show ownership that he was the man for the job. With a winning percentage of just .444, Ausmus led the Angels to the fourth-worst season in franchise history with a record of 72-90.

This was the first year the Angels reached 90 losses since the 1999 season. By finishing 35 games behind the Astros in the AL West, Los Angeles missed the playoffs for the ninth time in the last 10 seasons.

The Angels knew Houston was the better team going into the season, but they also wanted to compete for a Wild Card spot. They didn’t.

In Ausmus’ defense, the Angels suffered injuries and had to play significant time without the likes of Mike Trout, Justin Upton, Shohei Ohtani, and others. However, Ausmus was still in charge of a team that benefitted from Trout’s .291 average, 45 home runs, and 104 RBI.

Now it appears that it’s Maddon’s turn to lead the Angels, but it won’t be his first rodeo with the organization.

Maddon’s Career With the Angels

The 65-year-old Maddon was a coach in the Angels organization from 1993 to 2005 before moving on to manager opportunities.

We already mentioned 1999 was the last time the Angels hit 90 losses before Ausmus’ team. Well, Maddon actually finished as the interim manager in that season of 1999. Maddon took charge for the last 29 games, winning 19 of them.

Mike Scioscia was then selected to manage the club, and Maddon served as his bench coach from 2000 to 2005, which included the World Series-winning season in 2002.

So, is Maddon destined to return to Los Angeles? With managerial openings for the Pirates, Royals, Giants, Padres, and Cubs (with other teams possibly joining the list), it isn’t yet set in stone. But if we do see Maddon in charge of the Angels, he’ll bring a past full of success.

What Maddon Could Bring to Los Angeles

However, it now appears that Maddon is in line for the Angels gig. If he takes it, Maddon will be bringing 14 years of managerial experience with the Rays and Cubs.

Maddon first made a name for himself while in charge of the low-budget club in Tampa Bay for a nine-year stretch. In that time, Maddon won at least 90 games on five separate occasions and reached playoff baseball four times.

In 2008, Maddon led the Rays to an American League Pennant.

His good work in Tampa Bay earned Maddon the opportunity to manage the Cubs for five years. In that time, Chicago’s worst season was 2019, when the club went 84-78.

The Cubs won at least 92 games every other season, all of which led to playoff baseball. In 2016, Maddon led the Cubs to their first World Series title in 100 years.

Maddon appears to be a good fit for the Angels, and Los Angeles would be signing up for the leadership of a successful manager if they choose to go that route.