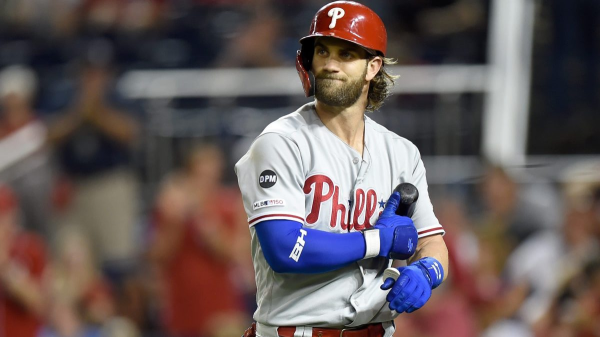 Four months ago, the Washington Nationals appeared to be a total disappointment after the projected contenders started the year 19-31. Yet with a Tuesday evening victory over the Philadelphia Phillies and former National Bryce Harper, Washington booked its ticket to the playoffs.

While the happier story is about the Nationals’ comeback throughout the season, the more intriguing story is about Philly’s failure to reach postseason baseball after throwing a truckload of cash at Harper this past offseason.

For Harper specifically, Tuesday will be hardest to swallow because his Phillies were eliminated by his former club with two defeats in doubleheader fashion. An early afternoon 4-1 loss was followed by a 6-5 setback, all of which included booing from the Washington fans every time Harper stepped to the plate.

Now, the $330 million man will miss out on October baseball while watching the club he used to play for compete for a World Series title.

So, is it fair to say Harper’s first year in Philadelphia has been a total failure?

After a long free agency process, Harper eventually landed in Philadelphia with a new 13-year, $330 million deal. Was it worth it?

Personally, Harper had a pretty good first year wearing a Phillies uniform. The stuff you can’t see with a glance at his numbers are that he topped the clutch scores in the National League, played solid defense (better than a year ago), and has been seventh in the majors in win probability added.

Harper also played well against the NL East-winning Braves, versus whom he hit seven home runs and racked up a slugging percentage of .606.

With a few games left to play, Harper has batted .258 and leads the Phillies with 34 home runs and 109 RBI.

If you’re looking for the bad, you can point out Harper’s third-lowest average of his career or the fact that he missed the All-Star Game for just the second time in his career.

However, Harper’s homer total has already hit his average mark, and those 109 RBI are the most he’s had in a single season. The Phillies slugger also remained healthy all year, which is a big win for the club.

The bigger issue in Philly in 2019 was the lack of production around Harper.

Perhaps the toughest part of the season for Philadelphia has been having to play in the National League East, where the Braves, Nationals, and Mets all reside. While a record of 79-78 isn’t ever going to make the Phillies a frontrunner, a difficult division can certainly hamper a team’s odds of earning a Wild Card berth.

In the end, the Atlanta Braves (96-62) clinched the division title while the Nationals (88-69) have claimed an NL Wild Card spot. The Phillies are fourth in the division behind the third-place New York Mets (82-75).

Despite Harper’s production and the lack of it around him, what has to hurt the most for Philadelphia is the fact that they were poised to make a run before the season started.

On Opening Day, only four teams had better odds to win the World Series than Philly. The Red Sox, Yankees, and Astros were the favorites with 6/1 odds. Behind that trio sat the Dodgers with 7/1 odds.

Now, as the Phillies have to watch two of those teams behind them – the Nationals and Braves – compete for a World Series title in October, it’s hard to see this season as anything but a failure.

As Philly looks forward, it appears it will need to have another big offseason if it wants to compete with a young Braves team that’s miles ahead of the competition within the NL East.