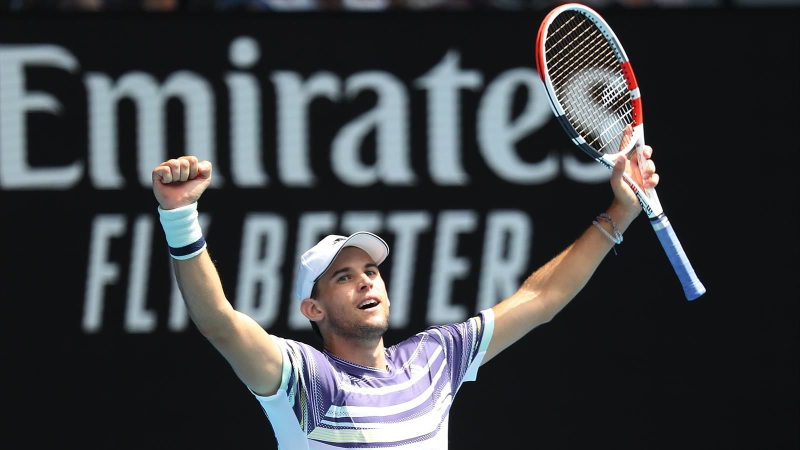 Rafael Nadal entered this year’s Australian Open with his sights set on tying Roger Federer’s 20 Grand Slam titles. But after Dominic Thiem took the first two sets of their quarterfinal match on Wednesday, Nadal was more focused on replicating Federer’s massive comeback from the previous day.

While Federer was able to overcome seven match points faced, Nadal had no such luck against a man who plays a similar style. Despite winning the third set, the top-ranked Nadal would fall in the fourth and lose the match by a score of 7-6 (3), 7-6 (4), 4-6, 7-6 (6).

The loss broke Nadal’s career-best streak of seven straight trips to the semifinals at Grand Slam tournaments. Now, Nadal will have to wait for the next Grand Slam and hope Federer isn’t able to gain another trophy if the Spaniard is to tie Federer’s Grand Slam tally.

Thiem, who many consider to be a younger version of Nadal, was winless in five matches against Nadal at majors. Two of those defeats came in the final at Roland Garros each of the past two years.

This time, however, Thiem had a significant edge when it came to the longer points. In points that featured at least nine shots, Thiem held a 24-12 advantage.

That proved vital in a match that lasted four hours and 10 minutes because of so many lengthy points.

Now, the tournament’s top seed has been eliminated, and Thiem advances to the semifinals.

For the casual tennis fan, one semifinal matchup will be far more appealing than the other.

In one semifinal matchup, two titans of the sport will go head-to-head for the 50th time as No. 2 Novak Djokovic takes on No. 3 Federer. In the other contest, No. 5 Thiem will take on No. 7 Alexander Zverev.

In the more notable match, Djokovic holds a 26-23 advantage over Federer in their career series against one another. Combined, these two tennis legends have won 36 Grand Slams; 20 for Federer and 16 for Djokovic.

To reach this point, Djokovic won in straight sets against Milos Raonic. Federer, who had to fend off seven match points against Tennys Sandgren in the quarterfinals, managed to pull off the comeback in a five-set thriller.

Thiem will be taking on Zverev for a place in the final after taking down Nadal for the first time in a major tournament.

To earn a place in the semifinals, Zverev took down three-time Grand Slam champion Stan Wawrinka. After dropping the first set, Zverev won three straight to take the match by a score of 1-6, 6-3, 6-4, 6-2.

Zverev was a -150 favorite against Wawrinka. Thiem, however, wasn’t expected to get this far. At -270, Nadal was a significant favorite over the man he’d previously earned a 5-0 record against in Grand Slam play.

Now, only two matches remain to set up the Australian Open Final.

The first match is heavily lopsided, as Djokovic enters the semifinal match against Federer as a -950 favorite. Federer is a +640 underdog.

The second match is projected to be a much tighter match. After beating the tournament’s top seed, Thiem is a -194 favorite to reach the final. Zverev carries odds of +164.

When it comes to winning the tournament, Djokovic is the favorite once again. As the highest remaining seed, Djokovic holds odds of -280 to win the Australian Open.

Before falling to Thiem, Nadal held the second-best odds of +370 to win the tournament. Thiem now takes Nadal’s place, holding odds of +480. Djokovic and Thiem are followed by Zverev (+950) and Federer (+1200).