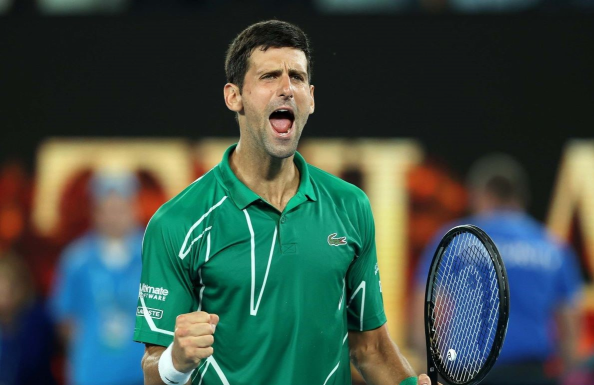 The Australian Open hosted a milestone of sorts in the sport’s history, as Novak Djokovic and Roger Federer met for the 50th time Thursday. After finding his way past Federer, Djokovic now has the opportunity to pull himself closer to the Grand Slam totals of his rivals with one more victory.

Going into the semifinal match between the two tennis greats, much of the discussion surrounding the match focused on Federer’s ability to recover after dealing with a nagging groin injury and winning a five-set thriller in the quarterfinals.

Much to everyone’s surprise, Federer came out with a hop in his step that allowed him to take a 4-1 advantage with a love-40 edge in the sixth game. From that point on, though, Federer couldn’t withstand the arsenal of shots Djokovic threw at him.

By a score of 7-6 (1), 6-4, 6-3, Djokovic extended his winning streak against Federer in Grand Slams to six. Now, the Australian Open defending champion will head to the final for a record eighth time.

Unfortunately, the match was clouded by the health of Federer. “I just want to say, respect to Roger for coming out tonight. He was obviously hurt,” Djokovic said. “Wasn’t at his best.”

Now, Djokovic will sit back and wait to see who he’ll be facing in the Australian Open Final.

Djokovic To Face … Who?

With his victory over the third-seeded Federer, second-seeded Djokovic now advances to the final match of the Australian Open with his sights set on another major trophy.

His opponent, however, is yet to be determined. The other semifinal of the tournament pits No. 5 Dominic Thiem up against No. 7 Alexander Zverev on Friday.

Thiem, who many liken to a younger version of Rafael Nadal, was able to upset the top-seeded Nadal in the quarterfinals. It took Thiem four sets – 7-6 (3), 7-6 (4), 4-6, 7-6 (6) – to earn the victory and break Nadal’s streak of seven straight Grand Slam semifinal appearances.

Zverev also earned his place in the semifinal round with an impressive victory, as he took down three-time Grand Slam winner Stan Wawrinka. After dropping the first set, Zverev took the next three in a row to win 1-6, 6-3, 6-4, 6-2.

According to the odds, Thiem is favored to get the best of Zverev with odds of -200.

Whoever makes it out of the second semifinal, they’ll be a significant underdog in the final versus Djokovic.

His semifinal victory earned Djokovic a 27-23 advantage in the head-to-head series with Federer, including an 11-6 edge at majors, but the Serbian still trails the tennis legend in Grand Slam championships.

In fact, Djokovic is still chasing both Federer and Nadal.

Whereas Djokovic has won 17 Grand Slams, Nadal has earned 19, and Federer has won 20 major titles.

However, both the 32-year-old Djokovic and the 33-year-old Nadal have time on their side when it comes to the Grand Slam race among the three tennis greats.

Presently, Djokovic is poised to add to his trophy case with another Australian Open title. After Nadal’s loss to Thiem, second-ranked Djokovic became the highest remaining seed at the tournament.

And according to the odds, Djokovic will be the favorite of either Thiem or Zverev.

Though specific match odds won’t be available until Thiem or Zverev solidifies a place in the final, the Serbian is a heavy favorite to be the eventual champion of the Australian Open with odds of -450. Thiem is next up with odds of +440, and Zverev is a longshot with odds of +1400.

Now, Djokovic is a single win away from claiming his 18th Grand Slam title.