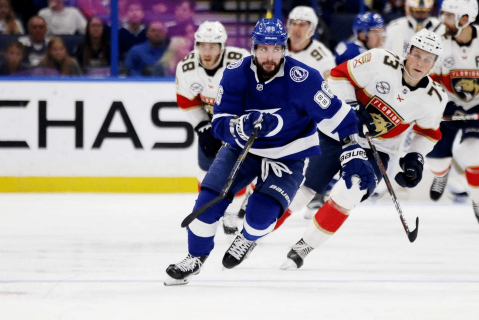 It’s an Eastern Conference showdown tonight, as the Tampa Bay Lightning (45-11-4, 1st Atlantic) head to the “City of Brotherly Love” to face off against the Philadelphia Flyers (28-24-7, 6th Metropolitan).

These are two teams who are in the middle of a long, great stretch of hockey. The Flyers had an eight-game winning streak snapped a little while ago, but have now put together three wins in a row heading into tonight’s game. They are 8-1-1 in their last 10 as well. For the Lightning, the league’s best team carries a six-game winning streak into tonight, and a 10-game point streak (8-0-2).

This is the third and final meeting between these two teams this season. Both games, one in November and one in December, were 6-5 overtime wins for the Lightning. Tonight, Tampa Bay is the favorite -150.

Bolting Toward the Presidents’ Trophy

This season has gone about as well for the Lightning as you can expect. Viewed as one of the league’s best teams near the start of the season, Tampa Bay has surged past the 30 other teams in the NHL, leading the second-best club Calgary by 15 points (94 vs. 79).

There’s no luck involved as to how Tampa Bay is succeeding at the level they are. Led by the league points leader Nikita Kucherov, the Lightning are first in goals, shooting percentage, and power play percentage. They can also defend their net, ranking fifth in goals allowed, and second in penalty kill percentage.

Coming off of a five-point performance Monday night against the Blue Jackets and his fifth straight multi-point game, Kucherov is up to 99 points on the season. At 70 assists, he has set the Tampa Bay record for assists in a season with 22 games left to go. Behind Kucherov, Brayden Point (78 points) and Steven Stamkos (72) are having sensational seasons as well.

With Andrei Vasilevskiy in net on Monday, expect the backup Louis Domingue to draw the start tonight. Domingue carries an okay 2.90 goals-against average and .907 save percentage, but an incredible 18-4-0 record.

Flying Back into Contention

The fact that the Flyers are still six points behind the Canadiens for the final Wild Card spot shows how far back they were heading into the new calendar year. Since January 12th, the Flyers have lost just one game in regulation, and two games overall.

Most of these stats should be taken with a grain of salt, as for the first three months of the season, the Flyers were among the league’s worst team. Overall, they rank 16th in goals, 17th in shots, and 17th in shooting percentage, as well as 21st in power-play percentage. After a seemingly never-ending cycle of goaltenders, the Flyers are just 25th in goals allowed and 27th on the penalty kill.

But this is a new Flyers team that is playing among the league’s best for over a month now. Claude Giroux is at the forefront, leading the team with 61 points. Behind him, Sean Couturier and Jakub Voracek are each at the 50-point mark. As mentioned earlier, goaltending was the biggest weakness all season for Philadelphia, who has already put seven different players in net this season. But that has all changed thanks to the emergence of rookie netminder Carter Hart.

As well as the Flyers have played in the last few weeks, Tampa Bay has been just as good and has been doing it for essentially an entire season. Whether it’s home or away, or on the second half of a back-to-back like tonight where they are 5-2-0, this team has rarely had a bad game. I’m picking the Lightning to win on the road tonight -150.