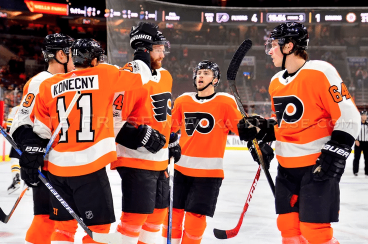 It’s an outdoor special in Philly, as the Pittsburgh Penguins (32-22-7, 4th Metropolitan) take on the Philadelphia Flyers (28-26-7, 6th Metropolitan) at Lincoln Financial Field in a Stadium Series showdown.

There will be pageantry, special uniforms, and likely some rain for this Stadium Series game. In fact, heavy rain could mean the postponement of the game until Sunday. Going in, the Penguins lost 4-0 to the Sharks at home on Thursday, while the Flyers lost 5-1 against the Canadiens the same day. Overall, the Penguins are just 4-5-1 in their last 10 games, while the Flyers are 6-3-1.

Pittsburgh won 4-1 in their last meeting, just 12 days ago. They have dominated this rivalry as of late, winning seven out of the last 10 meetings. This will also be the teams’ second outdoor game against each other after the Penguins won 4-2 in 2017 at Heinz Field in Pittsburgh. They are the favorites to win once again, currently listed at -125.

Skating Near the Edge

For a great deal of the season, the Penguins have bordered the edge of the playoffs, barely staying in a postseason spot. As of writing, they hold just a one-point lead over the Hurricanes for the second and final Wild Card spot. But Pittsburgh’s play has been less than inspiring as of late, winning just four out of their last 10, and most recently getting shut out at home by San Jose.

Despite the recent shutout, Pittsburgh’s offense has still produced. They rank fifth with 3.43 goals per game, along with being top-10 in shots, shooting percentage, and power play. But sloppy defense and inconsistent goaltending have hurt them, as the Penguins rank a measly 21st in goals allowed and 27th in shots allowed.

Sidney Crosby is having another great season with a team-leading 73 points. Phil Kessel is next with 62 points, but the winger has failed to score a goal since January 30th. Evgeni Malkin, Jake Guentzel, and Kris Letang are all players to watch for as well.

After Casey DeSmith’s loss to the Sharks, Matt Murray is expected to once again start for Pittsburgh tonight. The two-time Cup winner is 18-10-1 with a 2.94 goals against average and .913 save percentage.

The Flyers were once the talk of the league after winning nine games out of 10 back in January and early February. But they have come down to Earth since then, coming off of back-to-back blowout losses against the Lightning and Canadiens. At 63 points, they remain 8 points behind Pittsburgh for a playoff spot with only 21 games left to play.

Philadelphia is tied for 18th with 2.9 goals per game. They are also 20th in shots and shooting percentage, as well as 23rd in power-play percentage. They don’t rank any better defensively either, sitting 27th in goals allowed and 20th in shots allowed.

The Flyers’ big three of Claude Giroux, Sean Couturier, and Jakub Voracek have all had solid seasons scoring 50 or more points. It’s the group underneath that has underwhelmed, with key players like Wayne Simmonds (27 points) and Nolan Patrick (23 points) failing to build off of prior seasons.

After a pair of bad performances from rookie Carter Hart, Brian Elliot is the confirmed starter in net. The veteran is 6-7-0 with a 2.51 GAA and .916 save percentage.

Pittsburgh has dominated the rivalry, although shots on goal have been fairly even in the teams’ last 10 games against each other. But the Penguins have a big advantage on special teams against the Flyers, and already have four games of experience with outdoor hockey. I will take the Penguins to win -125.