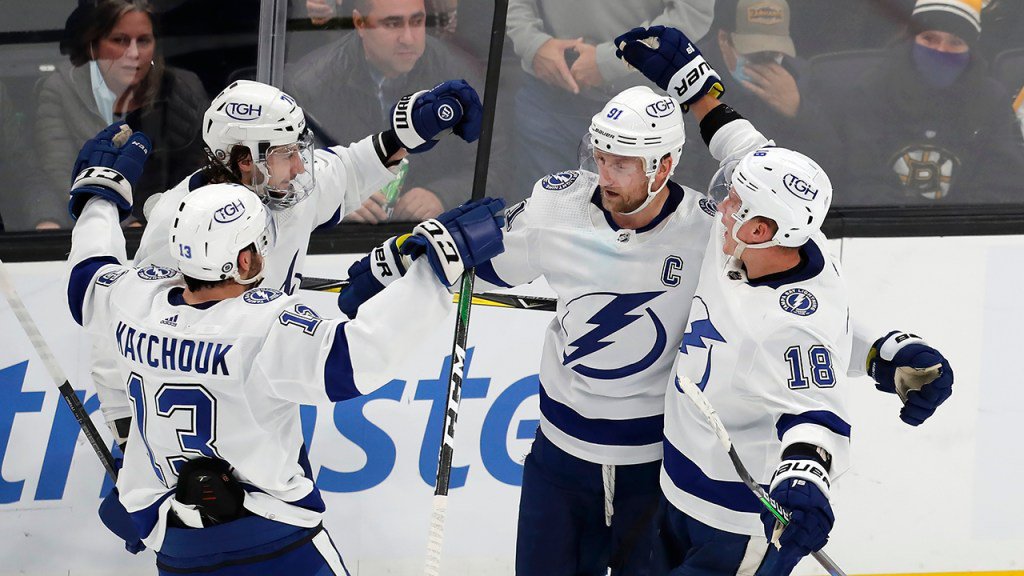 Another week of NHL betting action is upon us as we near the end of the 2021-22 season. The trade deadline is right around the corner, which means teams will be doing what they can to ensure that they take one step closer to locking down a playoff spot.

As usual, there are several NHL betting trends worth taking note of for the week of March 7 to March 13. Not only do these trends give us a better idea as to how the rest of the season could unfold, but they also give bettors a chance to add some extra excitement to the remaining guys.

Here’s a look at some interesting NHL trends to pay attention to over the coming days.

With a 37-12-6 record, the Tampa Bay Lightning continue to prove that they’re one of the best teams in the NHL once again. However, they’ve just begun a six-game road trip, with four of those contests being scheduled for this week.

The good news is that the Lightning have been fantastic on the road lately. They’re 8-2 in their last 10 road games, outscoring opponents 48-27 over that stretch.

When it comes to trends regarding NHL player props, Steven Stamkos and Nikita Kucherov pace all Tampa Bay Players with seven goals apiece over that stretch. They also have 15 and 13 points, respectively, in that span, which shows that they’re both good options for assist and point markets as well.

Another thing that bodes well for the Lightning this week is that their upcoming schedule is manageable. They’re set to face the four Canadian teams this week, with the Calgary Flames being the only major challenge.

Having said that, the Lightning are 7-3 straight up in their last 10 games against the Flames. Tampa Bay has also won five in a row against Calgary, so there’s clearly good betting value to be found with the defending Stanley Cup champions.

One of the bigger success stories this NHL season has been the Minnesota Wild. Unfortunately, the Wild have hit a roadblock ahead of this week.

Minnesota is 2-8 straight up in its last 10 games and is quickly losing its position in the Central Division. Goaltending and defense have been a major cause for concern over this skid, with the team surrendering at least four goals on eight separate occasions — including in each of the last five games.

The increase in goals allowed has led to the total hitting the over in eight times over the Wild’s last 10 games. That’s pretty surprising for a team that was praised on its defense earlier this season.

Another noteworthy trend is that Minnesota is 1-9 against the spread (ATS) in its last 10 games as well. Considering how the Wild have the seventh-toughest remaining schedule in the NHL according to Tankathon, it’ll be interesting to see how many times they fail to cover the spread down the stretch.

Nevertheless, BetMGM is giving the Wild +2000 odds to win the 2021-22 Stanley Cup. Unless something changes this week and Minnesota starts winning games again, the organization could fall out of the sportsbook’s top 10.

The Calgary Flames’ Elias Lindholm has been having a career season. The 27-year-old veteran has scored 27 goals in 54 games, which leaves him two away from tying his career-high of 29.

What’s more impressive is that a large chunk of his goals has come recently. Lindholm has found the back of the net in 11 of his last 13 games. He has 13 goals over that stretch, which includes scoring in each of his last three outings.

Lindholm’s goal-scoring tear has resulted in success for the Flames as well. Calgary is 11-1-1 over its last 13 games, however, the team faces a difficult upcoming schedule.

The Flames are set to play five games over the next level days and their opponents aren’t exactly easy. The Lightning, Colorado Avalanche and Washington Capitals are just three of the teams that they’ll have to play.

The good news is that Lindholm hasn’t had issues scoring against top teams, proven by a pair of goals against the Avalanche this past Saturday. If he can continue beating the league’s top goaltenders, the Flames have a great shot at continuing their success going forward.

The Montreal Canadiens have looked like a completely different team since Martin St. Louis was hired as the team coach. The Habs are 7-1 in their last eight games and have a great opportunity to keep that momentum rolling this week.

The Canadiens’ next three games this week are against opponents:

The Canucks are the best team of the trio, but it isn’t like they’ve been out of this world this season. After all, Montreal only lost to Vancouver, 2-1, earlier this season, so a victory for the former isn’t out of the question.

Meanwhile, the Kraken and Flyers have been basement-dwellers for the entirety of the 2021-22 campaign. Seattle is 1-8-1 in its last 10 games while Philadelphia owns a 2-6-2 record over that span. With how great the Canadiens have been playing, there’s a real possibility that their streak can continue.

Even if any of their opponents end up being the betting favorite, the Canadiens are 6-1 straight up in their last seven games as the underdog. In other words, expect Montreal to keep succeeding unless proven otherwise.

Another player who’s been heating up lately is Nashville Predators defenseman Roman Josi.

The 31-year-old veteran blueliner has been playmaking better than anyone else in the league lately. He has 15 assists over his last 10 games, which is the most among all NHL players over that span.

The increase in assist totals makes Josi a reliable choice when it comes to player props regarding assists and points. Considering how he has six assists in his last two games along, it isn’t hard to see why so many bettors would be drawn to him.

It’ll be interesting to see how Josi performs this week. Three of Nashville’s next four games are against playoff opponents, while the other team — the Anaheim Ducks — is only three points out of a postseason spot.

If Josi can continue his current pace, he could also be an outside pick to win the James Norris Trophy as the NHL’s top defensemen. He currently ranks fourth on BetMGM with +1200 odds, but it isn’t hard to imagine those increasing if he keeps setting up his teammates.

The 2022 Formula 1 season is only six races deep, but the race for this season’s championship alerady appears to be down to just two drivers. Last season, Red Bull driver Max Verstappen claimed his first Formula 1 World Drivers’ Championship in highly controversial circumstances, with Lewis Hamilton denied what would have been a record-breaking END_OF_DOCUMENT_TOKEN_TO_BE_REPLACED