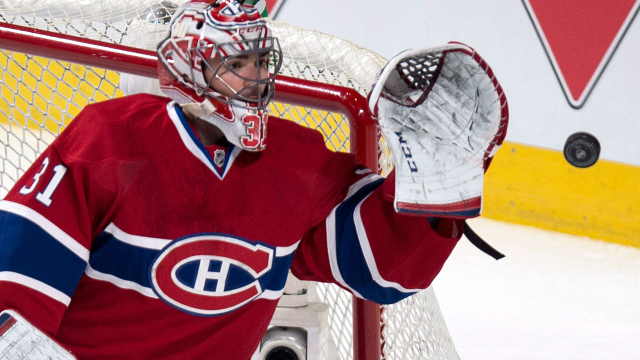 Well, given how all over the map the start to this hockey season has been, it should come as no surprise that I found myself on the wrong end of some picks last week. Toronto and LA looked terrible and cost us money all over the place. We are going to avoid both teams this weekend as there are definitely some kinks that need to be ironed out on both sides.

Time to get on the winning side of the ledger, and here is where it all begins.

Even without their starting goalie Pekka Rinne, Nashville continues to move forward. Jusse Saros is 5-1 this year, proving once again that if you have a good backup, you are going to be just fine. The team does it with balanced scoring, which is the exact opposite of what is happening in Edmonton. The Oilers are squandering the chance to shine with the best player in the world, and another week of inadequacy has left the management scratching their heads. This one is an afternoon game in Smashville, so we expect more of the same.

The reigning champs are making their way across the prairies, but this time right on the heels of their division rival Pittsburgh Penguins. The Penguins torched Calgary for 9 goals in their last game, and the Caps are hoping for the same kind of defensive breakdown. Evgeny Kuznetsov has emerged as a real start on this Caps team, which gives more space for legend Alex Ovechkin to go to work. The Flames, on the other hand, have far too much talent to be playing this poorly. They are going to have to figure it out soon, or changes can be expected in a city that is desperate to get their team to at least be the best in its province. We don’t see the turnaround starting today, and saw a money line of -115 that we are jumping on.

Our pick: Take Washington on the money line -115

No one is quite sure what to make of either of these teams, but one thing is for certain: they both create entertaining hockey as a result. Both these teams are struggling to find identity in net, as each has cycled through goaltenders over the last decade. Up front, the Islanders are clearly trying to move on without John Tavares, and seem to have found scoring in bursts. The Flyers, on the other hand, have a lot of streaky firepower on their roster. We expect this one to be a barnburner, and we think the Islanders will keep it close.

Our pick: Take the Islanders +1.5 and the over

At the start of the season, this looked less likely to be another battle in this age-old rivalry. The Habs were not supposed to accomplish much this season while the Bruins were a Cup Contender. Well, here we are a few weeks in, and the two teams are neck-and-neck in the standings. The young Canadiens don’t seem to know they aren’t very good, and Carey Price is having a resurgence in nets. One thing Montreal has going for it tonight is a very distracted Boston crowd – the Red Sox will be playing in LA for the World Series in the middle of tonight’s matchup. Look for Montreal to sneak one out here, or at least keep it very close in a low scoring affair.

Our Pick: Montreal +1.5 and the under

This is an interesting line – Colorado has been scorching hot to start the season, and their top line is firmly entrenched as one of the best in the league. They are playing the second night of back-to-back games and heading on the road to Minnesota, which is likely why the Wild are favored. However, Minnesota hasn’t shown us enough to give us the confidence that they are going to be slowing down the Avalanche. It is a marquee matchup in nets with Varlamov going against Dubnyk, which is why the total is down to 5.5 goals. We don’t like that number much in this game, and yet we love Colorado to win the game outright. Checking the money line, we find value here at +145. Feel free to take the goals to hedge your bet, but we are taking our shot at the upset.