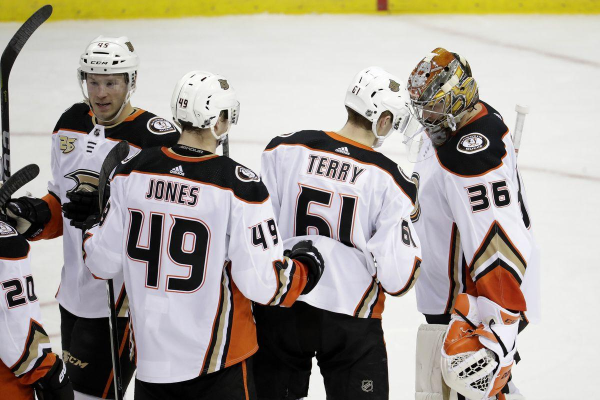 In the final day of the regular season before the All-Star break, the St. Louis Blues (21-22-5, 6th place in Central) finish their brief road trip out west against the Anaheim Ducks (21-20-9, 5th place in Pacific).

Despite a franchise-record 12 losses in a row, the Ducks have won two of their last three games and are just one point behind the Colorado Avalanche for the final Wild Card spot. As for the Blues, even with three losses in their last four games, they sit only five points behind Colorado with a little over 30 games to go in the season.

For this game, it’s the road team who is favored to win. St. Louis is currently listed at -125.

Neither team has shown much offensively this season. The Ducks are averaging 2.32 goals per game, 30th in the NHL. They’re also averaging just 27.4 shots on goal a game, dead last in the league. Anaheim also struggles in shooting percentage (8.5%, 29th) and power play percentage (14.6%, 27th). St. Louis isn’t as bad offensively, just slightly below average across the board. The Blues average 2.79 goals per game, tied for 24th. They also average a 20th-ranked 31.1 shots per game with a shooting percentage of 9% (22nd).

It has been a disappointing season for the Blues, culminating with the firing of coach Mike Yeo in November and the subsequent hiring of Craig Berube. Since Berube took over, St. Louis has gone 14-13-2 and 6-4-1 this month, inching closer to a playoff spot that looked increasingly unlikely.

Newcomer Ryan O’Reilly leads the team with 18 goals and 31 assists. After him there’s David Perron (35) and Vladimir Tarasenko (31), the only other players over the 30-point mark. Brayden Schenn (26) and Jaden Schwartz (20) are a pair of forwards who also help St. Louis’ offense.

But what has really helped spark the Blues recent play has been the stellar goaltending of 25-year old Jordan Binnington. A third round pick by the Blues in 2011, Binnington appeared in just one game prior to this season. After getting called up following the trade of Chad Johnson to the Ducks, Binnington has started six games, going 4-1-1 with a 1.96 GAA and .924 save percentage. He has started six of the last nine games for St. Louis, replacing the struggling Jake Allen as the new starting goaltender.

It has been a rough go for the Ducks, who recently ended their 12-game losing streak but have still lost 13 of their last 15. Rather than firing coach Randy Carlyle, general manager Bob Murray traded Andrew Cogliano, Pontus Aberg, Luke Schenn, and Joseph Bladisi in a span of two days. In return, they received Devin Shore, Justin Kloos, Michael Del Zotto, and Derek Grant.

On the surface, none of those moves will be impactful enough to turn around the Ducks. The captain Ryan Getzlaf leads the team in points with just 32. Following him are veteran forwards Adam Henrique (27) and Rickard Rakell (24), followed by defenseman Brandon Montour, also at 24. Two more players who the Ducks rely on are leading goal-scorers Jakob Silfverberg and Ondrej Kase, however both players were recently placed on injured reserve.

Then there’s goaltender John Gibson, the sole reason the Ducks still have a chance to make the playoffs. Gibson is 6th in save percentage at .921 despite facing a league-leading 1,330 shots against, over 100 more than the second place Marc-Andre Fleury. The only goaltender in the top 10 in shots against with a better save percentage than Gibson is Frederik Andersen, who is at .922 with almost 300 less shots against.

While it’s normally wise to like a home underdog, especially in hockey, there are just too many things going against the Ducks right now. In addition to only being 10-7-8 at Honda Center, Anaheim will likely be without Kase, Silfverberg, and Ryan Kesler. Corey Perry and Patrick Eaves are still out as well, even though both have returned to practice. I like a healthier St. Louis team led by Binnington to beat Gibson and the Ducks on the road just before the break. Take the Blues -125.

Tonight’s NBA betting schedule is lacking in overly compelling matchups, but tonight’s action will also be taking place with a few notable names missing. Booker, Morant, and Lillard Sidelined Tonight and Beyond Booker Out Versus Pistons Due to Hamstring Injury The Phoenix Suns lost Devin Booker (hamstring) on Tuesday against Golden State but closed out END_OF_DOCUMENT_TOKEN_TO_BE_REPLACED