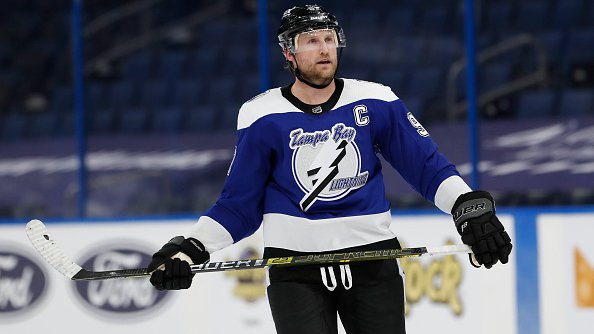 Although both teams aren’t as hot lately as they were earlier in the year, it’s still a major battle between two of the Eastern Conference’s top teams. With award candidates on both sides of the ice, Saturday’s clash should be nothing short of entertaining.

Can the Lightning take one step closer to first place in the Atlantic Division? Or will the visiting Rangers ruin that chance while improving their own Metropolitan Division odds?

Rangers Look to Get Back on Track in Tampa

The New York Rangers have been one of the bigger surprises in the 2021-22 NHL season. Everyone has been stepping up on the team, from the forwards to the goalies, leading to some experts viewing them as a legitimate Stanley Cup contender.

Having said that, the Rangers have had their fair share of ups and downs in recent weeks. Even though they’re a solid 10-5-1 in their last 16 games, they’ve also lost three of their last five outings.

Artemi Panner has continued being the Rangers’ best player in their last five games, racking up 10 points in that span. He now has 71 points on the year, putting him on pace for 98 points this season, which would be a new career-high.

Having said that, the Rangers need some of their other players to step up if they want to beat the Lightning in a massive nationally televised game. Chris Kreider leads all New York players with 40 goals this season, but he only has two goals without an assist in his last five games. He has scored in back-to-back outings though, so only time will tell if that trend continues.

Former first overall draft pick Alexis Lafreniere is also in another slump. He has just one assist in his last five games and is a minus-4 over that stretch. He just hasn’t developed as management expected, so he’ll need to pick up his play as soon as possible if the Rangers hope to go on a deep run.

Another Ranger who’s been playing uncharacteristically bad is goaltender Igor Shesterkin. The currently Vezina Trophy favorite on multiple sportsbooks, Shesterkin is 1-2 in his last three starts with a 4.34 goals-against average (GAA) and .872 save percentage (SV%).

Shesterkin gives the Rangers the best chance to succeed when he’s at the top of his game. They’ll need him to perform that way on Saturday considering how the Lightning average the seventh-most goals per game (GPG) this season.

Saturday's game against the Rangers will be the Lightning’s first at Amalie Arena since March 4. This is their first game following a six-game road trip that saw them go 3-3-0, so it’ll be nice to return home — even if it’s just for one game before they leave again.

Having said that, the Lightning are currently riding a two-game win streak and will look to continue that against the Rangers. There’s a lot for Tampa Bay fans to be optimistic about after their team has gone 15-3-2 in its last 20 home games.

The Lightning had an uncharacteristically difficult time scoring goals during their recent road trip. Although they average 3.4 GPG this season, they’ve scored just two or fewer goals in three of their last four games.

Steven Stamkos and Nikita Kucherov are known for their offensive firepower, but the dynamic duo combined for just a single goal on the road trip. Stamkos hasn’t found the back of the net since Tampa Bay’s last home game, so perhaps he’ll get going again after a game on home ice.

Brayden Point is also dealing with his own drought, having not scored a goal since that March 4 game as well. If the trio of him, Stamkos and Kucherov can get going again, teams will start fearing the Lightning again.

Goaltender Andrei Vasilevskiy has also been playing beneath his usual standards. He’s 2-3-0 in his last five starts, recording a 2.82 GAA and .907 SV% over that stretch — both worse than his season average of 2.37 and .919, respectively.

Having said that, he’s allowed just one goal in each of his last two outings, stopping 59-of-61 shots over that span (.967 SV%). Even if his team is having goal-scoring issues, that type of goaltending will at least keep Tampa Bay in most games.

One area that the Lightning seriously need to improve on is their power play. They already left a lot to be desired with the 16th-ranked PP unit on the season, but they only went 2-for-20 on the man advantage during their six-game road trip.

Special teams units win championships in the NHL and the Lightning are proof of that in recent years. If they can get the power play to start clicking again, the results will follow.

Some teams struggle in their return home after a road trip, but that has not been the case for the Lightning this season.

When playing at home after a road trip of three or more games, the Lightning are a perfect 3-0-0 this season. Look for that 100 percent record to stay intact. And while NHL picks for today favor the over in this matchup, the under has better value. The total has been under six goals in 17 of the Rangers’ 32 road games, while that result has occurred in 15 of the Lightning’s 28 home games.

The 2022 Formula 1 season is only six races deep, but the race for this season’s championship alerady appears to be down to just two drivers. Last season, Red Bull driver Max Verstappen claimed his first Formula 1 World Drivers’ Championship in highly controversial circumstances, with Lewis Hamilton denied what would have been a record-breaking END_OF_DOCUMENT_TOKEN_TO_BE_REPLACED