5 Takeaways From The First Weekend In the NHL Season 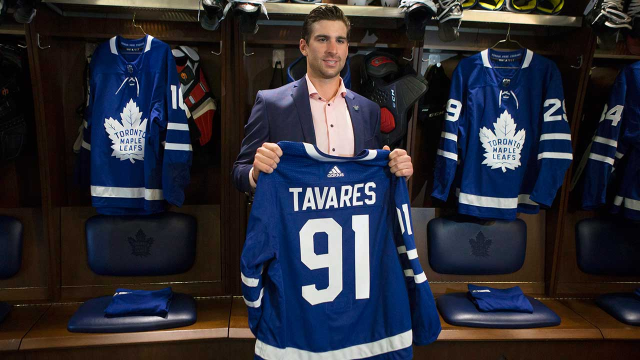 After an offseason that saw some big names change teams and others stay with their current home bases, the time finally came to drop the puck on the NHL season. As with any season, every team starts with an airof hope as everyone chases down the dream of lifting the Stanley Cup in June. With the first big weekend of games in the books, here are a few observations.

The Toronto Maple Leafs pulled off one of the biggest coups in recent league history by landing marquee free agent John Tavares in the summer. Tavares, a Toronto native, was far and away the biggest catch out there this year, and Leafs GM Kyle Dubas convinced him to join an already stacked roster that includes both Auston Matthews and Mitchell Marner. The pressure of playing in front of his hometown fans doesn’t seem to have affected Tavares, as he has burst out of the gate with 4 goals in his first three games, including a hat trick on Sunday. This has Toronto fans in a frenzy, but the results of the games may not have them planning a parade route just yet.

Reports of the demise of the Hans are greatly exaggerated

Coming into this season, the most common question about the Montreal Canadiens was the length of time that GM Marc Bergevinwould still be on the job. With some disastrous trades in recent years (Subban for Weber, Sergachev for Drouin to name a couple), the icing on the cake seemed to be the trade of team captain Max Pacioretty to the Vegas Golden Knights on the eve of the start of the season. The team in front of All-Star goalie Carey Price looks very different than it did only a couple of years ago. However, the team seems to be fired up with the “underdog” role, and their first two games showed a team willing to out-hustle teams that clearly had them out-skilled. It is difficult to say how long this can last, but having a competitive team in Montreal is definitely good for the league as a whole, and surely Bergevin has to be happy with the early returns.

Edmonton continues to be frustrating

Having so many numbers,one draft picks in the last decade was supposed to be what sent the Edmonton Oilers back to the glory days. However, a combination of underperforming players, weak draft classes and no one to draft on defense has left Edmonton outside the playoffs more often than not in the last few years. This is not great news for Connor McDavid, the new face of the league and the best player to hit the ice since Sidney Crosby. He is doing his part to keep the team afloat, but he is going to need help. The Taylor Hall for Adam Larsson trade completely backfired, with Hall winning the Hart Trophy last year as the league MVP. Management is going to have to find some defensemen to help this team out or McDavid could find himself watching the playoffs from home again this year.

This one is not necessarily the biggest shock, but it is still a bit disappointing regardless. The Vegas Golden Knights were the darlings of the NHL last year, outperforming everyone’s expectations to make the Stanley Cup Final. The team hasn’t changed much of the roster, but they have struggled to light a fire out of the gate, with only 1 win in its first 3 games. This week should be challenging with road games against Eastern Conference powerhouses Pittsburghand Washington. No need to panic yet, but it will be interesting to see what regression if any we see in this team.

Scoring (or lack thereof) has been a thorn in the side of the NHL for years now, and that has been seen in the lines that are set for games. For the better part of a decade, almost every game has a total set at 5.5 goals. This is unacceptable for a league which is trying to sell its sports as fast and action-packed. The NHL has tried many rule changes to make the game more scoring-friendly, but it appears that the transition to a younger, faster player base is having the most impact, especially early on in this season. Just listen to these stats: only one week into the season, we have seen 4 games with 7 total goals, 2 with 9 goals, 1 with 11 goals and THREE games with 13 total goals scored. Now, we aren’t suggesting we are headed back to the time of 200 point scorers, but this is definitely trending in the right direction.