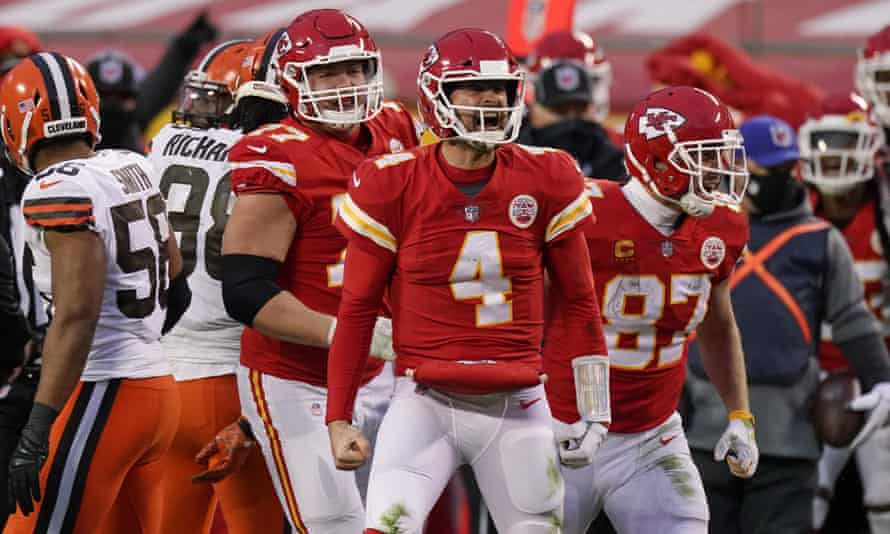 The first two weekends of the NFL playoffs have seen no shortage of excitement and surprises. But even with several upsets taking place, updated Super Bowl 55 odds still feature the top seeds from each conference.

Next Sunday, the final four will become the final two as the conference championship games take place. In the AFC, the reigning Super Bowl champions and the No. 1 seed Kansas City Chiefs take on the No. 2 seed Buffalo Bills. The health of Patrick Mahomes will be a storyline to watch in the days leading up to that showdown. Meanwhile, after shedding some postseason history already, the Bills are close to their first Super Bowl berth since the Jim Kelly era. Josh Allen and the Bills are arguably the hottest team in the league, so a lot of eager bettors will be backing them.

In the NFC, it will be a matchup of the old guard. Aaron Rodgers is making his fifth NFC Championship Game appearance, but this is the first he will play at home. To go one step further, the No. 1 seed Green Bay Packers will have to send Tom Brady and Tampa Bay packing. Green Bay is the NFC favorite, but betting against Brady in the playoffs is a tough proposition.

With the big game now less than three weeks away, Super Bowl betting odds really come into focus. Here is a look at the latest odds, along with a rundown on what could make or break each remaining team’s hopes of hoisting the hardware in Tampa next month.

Let’s take a look at some of the biggest Super Bowl betting markets ahead of Championship Weekend.

The Chiefs have been the Super Bowl betting favorite for much of the season, but the Packers have tightened the gap. The biggest observation from the updated odds is the Bucs sitting at +450. Someone has to bring up the rear, and it is understandable that it would be the lowest seed left.

Since the AFL-NFL merger, the AFC and NFC have both won 25 titles each. However, the AFC has dominated the Super Bowl in recent years, producing six of the last eight champions. Seattle (Super Bowl XLVIII) and Philadelphia (Super Bowl LII) are the only recent Super Bowl winners from the NFC.

This year is as good a time as any for the NFC to snag one, with their conference finalists being led by two of the game’s greatest quarterbacks.

Kansas City Chiefs (+205): The Chiefs occupied the position as Super Bowl favorites even while the Pittsburgh Steelers were flirting with a perfect season. That is an indication of just how good this team is and the stellar season that they have had as a follow-up to last season’s title success.

However, this might be the most tenuous their hold on the favorite label has been in some time. The concussion that Mahomes suffered against Cleveland looms large, and so does the Packers’ strong statement against the Rams. That said, the Chiefs are the team to beat until someone beats them. That is going to be a tough task whether it is Mahomes or backup Chad Henne taking the snaps.

Green Bay Packers (+210): When Green Bay coughed up a two-touchdown lead in the second half at Indianapolis in Week 11, there was reason to wonder if the Packers could win when it counted. But that overtime loss to the Colts is their last one to date. They enter the NFC Championship Game on a high after dominating the Rams in a 32-18 win on Saturday, out-gaining the Rams 484-244.

Green Bay’s odds have steadily improved with each week and each win, and it is worth noting that their current odds are even shorter than they were following Saturday’s win, when they were +260 to win Super Bowl 55.

There are a lot of reasons for the Packers to be a popular NFL futures odds pick. Aaron Rodgers is Aaron Rodgers and is having arguably his best season as he chases an elusive second Super Bowl ring. Their ground game is as good as it has been, with the trio of Aaron Jones, Jamaal Williams, and A.J. Dillon. On top of that, the defense has not broken very often during their current winning streak.

Buffalo Bills (+330): While there could have been a strong argument in favor of any of the other three teams left coming into the season, this was not expected to be the year that the Bills took the big leap. But here they are, a win away from a first Super Bowl appearance in almost three decades. It seems like it is a matter of when, not if they will eventually get there.

Of the remaining contenders, Buffalo is the biggest wild card based on their flaws relative to the other hopefuls. The Bills were strong defensively against the Ravens, but can they do the same against Kansas City if Mahomes is healthy? The biggest question is if they can run the ball when it matters. Their rushing attack is by far the weakest among the remaining quartet.

Tampa Bay Buccaneers (+450): Tom Brady is used to front-runner status, so this is an unfamiliar position for him to be in. Perhaps that underdog status makes he and the Bucs even more dangerous.

However, it is tough to look at any team that has Tom Brady and one of the league’s best defenses as an underdog. The defense opened the door for the Bucs in New Orleans, and the offense made plays when it needed to. That is the mark of a championship team. That is something that a lot of the Bucs don’t know a lot about, but Brady does a few times over.

Those who backed the Bucs prior to their win over the Saints have to be feeling rather good right about now. Sure, +450 looks like long odds compared to the Chiefs and Packers. But prior to Sunday’s win, the Bucs sported four-figure odds.