Smith-Schuster Likely Out For Key Game After Aggravating Knee Injury 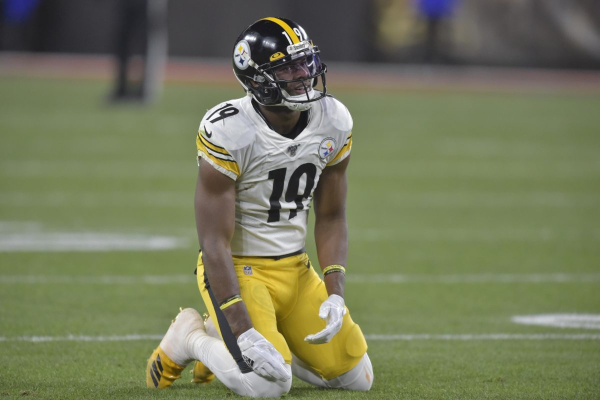 In a Nov. 14 contest against the Cleveland Browns, Pittsburgh Steelers receiver JuJu Smith-Schuster suffered a concussion and knee injury on the same play. After missing the next three games because of the knee, Smith-Schuster was back to practicing and eyeing a formal return this Sunday against the Buffalo Bills.

Smith-Schuster was a full participant in Wednesday’s practice, but the star receiver aggravated his knee injury during practice on Thursday and left early. After this setback, Smith-Schuster is now unlikely to play in Sunday night’s big matchup against Buffalo.

There is good news, however. First of all, Pittsburgh is likely to get running back James Conner back on the field this Sunday after injuring his shoulder in that same game against Cleveland in the middle of November.

Additionally, the Steelers have won each of their three games without Smith-Schuster and Conner while getting solid production out of the likes of Benny Snell Jr. and James Washington.

However, those three victories came against Cincinnati, Cleveland, and Arizona. On Sunday, the Steelers will be playing the 9-4 Bills.

On the season, Smith-Schuster has 38 catches for 524 yards and three touchdowns. That production will be missed if the star receiver can’t go Sunday night.

With just three games remaining, the AFC playoff picture is getting tense. At 8-5, Pittsburgh is one of seven teams with at least eight wins. Only six of those teams will earn a playoff berth, which means the Steelers will have to stay above at least one other of the trio of teams at 8-5.

With the Ravens, Patriots, and Chiefs on their way to division titles, the Wild Card race is coming down to the 9-4 Bills, 8-5 Steelers, and whoever doesn’t win the AFC South out of the Texans and Titans (both 8-5).

That’s why this week’s matchups are so vital – it pits two of the teams battling for a Wild Card position or division title against one another in two separate games.

First of all, Houston and Tennessee play each other on Sunday. The winner will gain the lead in the AFC South, and the loser will fall to 8-6 on the year. That makes the Sunday Night Football matchup all the more important.

With a loss, Pittsburgh will also fall to 8-6 and be in a sprint to the finish line against the AFC South runner-up. That’s a daunting task with Baltimore still sitting on Pittsburgh’s schedule.

But with a win on Sunday night, the Steelers would improve to 9-5 while knocking the Bills down to 9-5 and simultaneously gaining an advantage over the loser of the Texans-Titans matchup.

To put it simply, a loss gives Pittsburgh no more room for error while a win would give Pittsburgh a great shot at another postseason berth.

The often-overlooked Bills have enjoyed a great season of football. Although they’re coming off a loss to Baltimore, they had a chance to tie the game with just seconds remaining. Plus, they ripped off three straight wins before that loss to the best team in the AFC.

A dominant defense has put Buffalo in position to earn a playoff berth, and that endeavor could become much easier if Smith-Schuster isn’t able to suit up on Sunday night.

However, it’s the Steelers who are currently favored to win this weekend’s contest. Because the game is in Pittsburgh, the Bills are sitting as 1.5-point dogs.

Yet when it comes to making the playoffs, the Bills are heavily favored over the other three teams battling for the remaining spots. Right now, Buffalo is sitting on odds of -3000 to reach the postseason.

Meanwhile, the Texans are holding odds of -450 to earn a playoff berth, and the Steelers (-182) and Titans (-168) are expected to be in a dogfight for the final Wild Card spot.