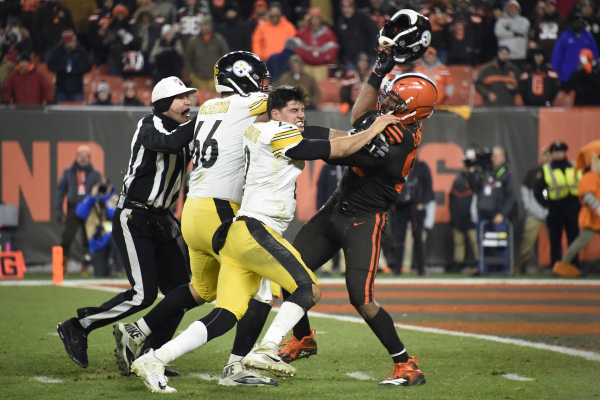 Over the last two decades, the Steelers have been a perennial powerhouse in the AFC. The Browns have been quite the opposite. And after a disappointing start to a highly-anticipated season, a Thursday Night Football matchup against their division rival gave Cleveland a chance to flex their muscle and take out some frustration in the process.

A wire-to-wire victory started with a Baker Mayfield quarterback sneak for a touchdown after he hit Odell Beckham Jr. on a 42-yard strike. A short, second-quarter touchdown pass to Jarvis Landry would be all Mayfield and the Browns needed to outscore a banged-up Pittsburgh squad that could only muster seven points in the contest.

Mayfield would end up throwing for 193 yards with two touchdowns and no interceptions while the Browns picked off Steelers quarterback MasonRudolph four times, but the story of the game was the brawl that capped off the night.

With eight seconds remaining in the contest, Rudolph took a snap and was hit by Myles Garrett as he threw. Those two players went grappling to the ground with Rudolph grasping Garrett’s helmet. Garrett would respond by tearing of Rudolph’s helmet and smashing it down on the quarterback’s head – an act that will likely result in a long suspension.

Larry Ogunjobi and Maurkice Pouncy, who retaliated with a kick to Garrett’s head, were ejected alongside Garrett.

And so, as the Browns score a big win that has the potential to turn their season around, they’re also likely to lose perhaps the best player on the roster to a lengthy suspension.

A Vital Game on Thursday Night

Although the Steelers and Browns weren’t among the Super Bowl favorites heading into this midweek matchup, this game had plenty riding on it.

For Pittsburgh, a win would have catapulted them to 6-4 and put them in a great spot within the AFC Wild Card race.

After starting the year with three-straight losses to three of the league’s best teams – New England, Seattle, and San Francisco – the Steelers had won five of six to earn a winning record on the season.

Although catching the 7-2 Ravens in the division was always highly unlikely, Pittsburgh had a wonderful chance to earn a playoff berth. Now, with games remaining against Cincinnati, Cleveland, Arizona, and the New York Jets, the Steelers still have a shot at a Wild Card spot, but a win Thursday night would have put them in the driver’s seat.

The Browns defense dominated Pittsburgh, and it would be hard to argue that Myles Garrett isn’t the best player on that defense. So, it’s going to be a hard pill to swallow when the NFL makes its decision about the length of Garrett’s suspension.

That suspension will be particularly demoralizing because Thursday’s win over Pittsburgh gave the 4-6 Browns life with the easiest part of their schedule coming up through the remainder of the season.

Building on two-straight wins, Cleveland will now get to play Miami, Pittsburgh, Cincinnati, Arizona, and Cincy again, with only Baltimore, whom they play in Week 16, owning a winning record.

So, the Browns are now in the thick of the AFC Wild Card race, but they’ll likely have to run much of that race without their best player.

What the Odds Say About Steelers, Browns

After the loss to the Browns, the Steelers are now technically on the outside looking in at the playoff picture in the AFC. At 5-5, Pittsburgh sits behind the four division leaders as well as Buffalo, Oakland, and Indianapolis.

The Browns now sit in the trio of teams with four wins alongside Jacksonville and the Los Angeles Chargers.

While the Browns still own a lesser record than their division rival, the odds now favor Cleveland over Pittsburgh when it comes to winning the AFC.

Tied with Indianapolis at +3500 is Cleveland, with Pittsburgh following directly behind with odds of +4000 to win the conference.