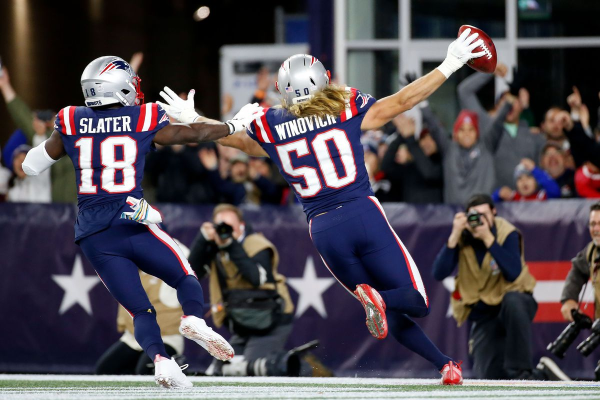 A Thursday Night Football win in Foxborough was already a longshot for the New York Giants, but it became impossible when the Patriots forced four turnovers. In the end, New England came out on top 35-14 and improved to 6-0 on the season.

Although the Patriots didn’t look dominant in the early going, allowing New York to tie the game at 14 in the second quarter and later bringing just a seven-point lead into the fourth quarter, New England proved to be too much to handle for rookie quarterback Daniel Jones and the Giants.

Patriots quarterback Tom Brady didn’t throw a touchdown pass in this contest, but he didn’t need to. On 31-of-41 passing, Brady passed Peyton Manning for second on the all-time passing yardage list as he threw for 334 yards and one interception.

Julian Edelman caught nine of those passes for 113 receiving yards.

For New England, the defense and special teams won this game. In addition to a blocked punt that Chase Winovich returned for a TD, Jamie Collins forced a fumble that Kyle Van Noy housed for another touchdown.

Although the Patriots can be concerned about the fact that New York remained within a touchdown for most of the game despite a turnover-ridden game, New England can also pride itself on the fact that it can win a game without its best offensively.

In the end, New England improved to 19 straight wins against first- or second-year quarterbacks as they dropped Jones and the Giants to 2-4.

While the Patriots were busy racking up 427 yards of offense, Jones and the Giants offense could only muster 213 yards.

It was a rough outing for the rookie quarterback who had little more than one moment to look back on with pride. A 64-yard touchdown to Golden Tate looked like a potential spark for New York, but it wasn’t enough.

On the night, Jones completed just 15 of 31 passes for 161 yards, one touchdown, and three interceptions. In addition to completing fewer than 50 percent of his passes, Jones finished the game with a QBR of just 9.2.

While Jones didn’t have the benefit of having Saquon Barkley in the backfield to relieve some pressure, the rookie QB looked confused by New England’s coverages and failed to progress through his reads at times.

Now, after jetting out to 2-0 as a starter, Jones has lost two straight games to the Bills and Patriots.

While Thursday’s game certainly won’t help Jones in his campaign to become the NFL’s 2019 Rookie of the Year, he’ll still remain near the top of the list.

Coming into Week 6 of the season, Jones trailed only Cardinals quarterback Kyler Murray for odds to win ROY. Murray was sitting on +220 odds, followed by Jones’ +280 odds.

For the Giants, playoff football looks more and more unlikely. In a division where New York would have to keep up with Philadelphia and Dallas for a shot at the NFC East, a Wild Card berth would be much more likely.

And with a record of 2-4, even a Wild Card spot feels well out of reach. Right now, the Giants are ahead of only four teams, with 500/1 odds of winning the Super Bowl.

For the Patriots, the Super Bowl is very much on the table. In fact, New England entered Week 6 as the odds-on favorite at 9/5.