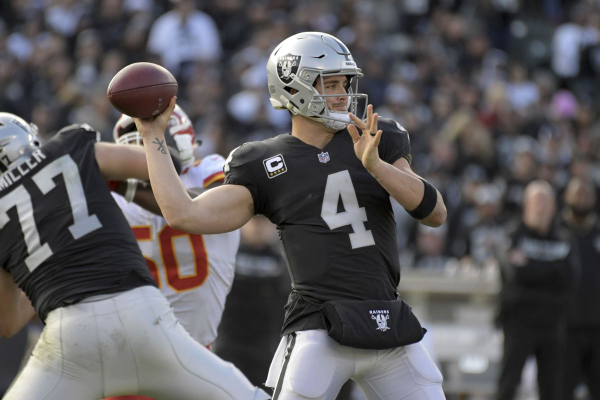 The Oakland Raiders enter the 2019 season with plenty of optimism, but also plenty of question marks on this roster. Head coach Jon Gruden has been building up this roster the way he wants it, and there has been plenty of turnover. The Raiders were one of the worst teams in the NFL a season ago, and their defense was miserable. Oakland has taken steps to try and improve on both sides of the ball, but now it’s time for them to prove it on the field.

The Raiders finished the 2018 regular season with a 4-12 record to finish in last place in the AFC West Division. Oakland was a little better in terms of betting in 2018, finishing with a 6-10 record against the spread. The Raiders are in a division with a pair of 2018 playoff teams, and their schedule is one of the toughest in the NFL.

The biggest move that the Oakland Raiders made in the offseason was trading for wide receiver Antonio Brown. Brown solidified himself as one of the top receivers in football during his tenure in Pittsburgh but was also known to stir up some drama and off-the-field issues. Tackle Trent Brown and guard Chaz Green were signed to free-agent deals in an effort to improve the Raiders’ offensive line. Oakland parted ways with wide receiver Jordy Nelson and backup quarterback AJ McCarron but feels that it has found some adequate replacements through free agency.

Derek Carr: Carr threw for over 4,000 yards a season ago but still had one of the worst QBR’s in the NFL at 46.5. It didn’t help matters that the Raiders allowed Carr to get sacked a whopping 51 times, and they didn’t have a running game to speak of. Oakland is counting on Carr to have a monster 2019 season but has also put backups in place in case he struggles.

Antonio Brown: Brown had 104 receptions for 1,297 yards a season ago, although he was wearing a different uniform. The former Steelers wide receiver has 74 career touchdowns and is averaging more than 13 yards per catch. Oakland is hoping that Brown brings that kind of production to the Raiders this season.

Rookie Class: Defensive end Clelin Ferrell and running back Josh Jacobs were the top two picks by the Raiders this season, and both players should see significant playing time. The Raiders have several holes on this roster, and they will need their rookie class to step up.

There is a lot of hype and optimism surrounding the Oakland Raiders this season, but it might be just a little too soon. The Raiders are going to be relying on several rookies in 2019, and their best offensive player, Antonio Brown, missed all of training camp with a variety of issues. Oakland should be a much better team in 2019, but the smart bet is still under 6.0 wins at -125. There are just too many really good teams on the schedule, and the Raiders have not improved enough to win these games. Stay away from the rest of the future bets surrounding the Oakland Raiders as well. Jon Gruden seems to be building something in Oakland, but it’s going to take some time.