Does Watching “Hard Knocks” Give You a True Betting Edge on the Oakland Raiders? 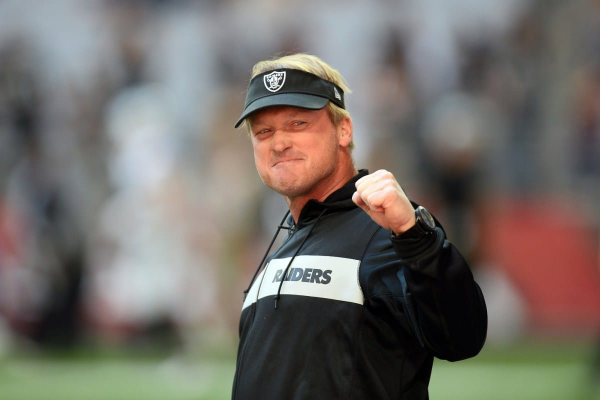 For some, it’s the Hall of Fame induction ceremony. For others, it’s watching second- and third-stringers fight for roster spots in exhibition games. But for many fans of the sport, football isn’t truly back until they hear the familiar theme music of HBO’s “Hard Knocks.”

The new season of “Hard Knocks,” which debuted Tuesday, will be taking us through the training camp and preseason of the Raiders in their final season in Oakland before moving to Las Vegas. New episodes are released every Tuesday at 10 pm ET.

Fans of the show get an inside look at how an NFL football team operates as it prepares for the upcoming season. From team dinners to training camp practices to those inevitable, heart-wrenching moments of a coach cutting a player, “Hard Knocks” gives viewers a chance to peek behind the curtain and see how players and coaches live on and off the field

For the Raiders, the storylines seem endless.

Why ‘Hard Knocks’ Chose the Raiders

The Raiders are a storied franchise, and considering their impending move to Vegas, fans of football get a chance to bid farewell to the team’s time in Oakland.

However, there’s plenty on the field to get excited about. First of all, anyone who’s watched Monday Night Football over the past decade has surely learned that Raiders head coach Jon Gruden has a unique, high-tempo personality. Seeing how Gruden interacts with players and goes through his own decision-making process offers plenty of intrigue.

Then comes the excitement of first-year Raider Antonio Brown, who brings a whole new dynamic to the offense as one of the best receivers in football. From an ungraceful exit out of Pittsburgh to his hot air balloon entrance into Raiders training camp, Brown is already bringing the entertainment.

The stories work their way down from Derek Carr’s attempt to prove he’s a surefire NFL starting QB talent to the introduction of offensive lineman Ritchie Incognito, who brings with him a troubled past.

Part of the noise around this year’s Raiders team is also due to the rookies. The first episode already provided a cut, as defensive tackle Ronnie Ollie, who was previously in front of cameras during his time at East Mississippi on Netflix’s “Last Chance U,” didn’t last.

Johnathan Abram, a rookie safety, emerged as a fixture of this year’s series, and viewers got to see him flying around on the field while also showing his animal-lover side, as he took fellow first-rounder Clelin Ferrell horseback riding.

“Hard Knocks” is always entertaining, but does it give bettors an edge?

While the show gives bettors a deeper, more insightful look at the Raiders than any other team, it’s important to note that everyone with access to an HBO account gets to see that exact same thing.

So, there’s no advantage to be gained by seeing how the Raiders are using Player XYZ in early training camps.

However, there’s potential to garner educated predictions about the season ahead based on things like injuries. For example, Antonio Brown comes into the preseason with injured feet. “Hard Knocks” might give bettors a look at how dedicated Brown is when it comes to rehabbing.

If Brown fails to slow down in practice and ends up skipping rehab sessions, perhaps a bettor could predict Brown exacerbating his injury and missing the start of the regular season. With the potential for the Raiders to be missing a key offensive weapon, that bettor may then see value betting the under on the Raiders’ projected win total of six games.

Yet the more productive ways a bettor can use “Hard Knocks” is to gain an edge by looking at the trends of the show over recent years. For example, of the past nine franchises to appear on the show, seven either equaled or improved their record from the previous year.

That sort of information could point to a likelihood of the Raiders reaching that projected win total of six games after a four-win season in 2018.

The more avid bettor could gravitate toward the trend of preseason struggles for “Hard Knocks” teams. Since 2007, teams featured on the show have gone 17-27 against the spread in preseason games.

So, while the behind-the-scenes look the show gives may not provide a betting edge, the trends and statistics surrounding the teams taking part in the show surely can.