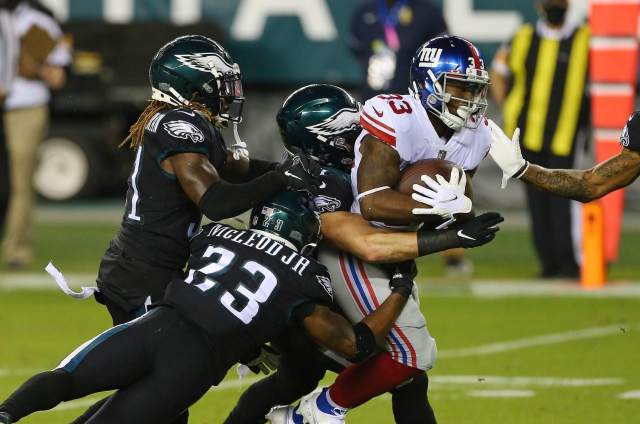 In what could be a crucial NFL Week 10 contest, the Philadelphia Eagles and New York Giants face off on Sunday, at least in terms of the NFC East. Everyone wonders which team is going to get the much-needed victory and boost their division title chances. The match would broadcast on November 15th at 1 PM ET, and it will be held at the MetLife Stadium, East Rutherford, in accordance with the COVID-19 restrictions.

The Eagles are just coming off their bye week, and they will be looking to extend their lead in the NFC East from two to three games with Sunday’s win over New York. Philadelphia is already on a two-game winning streak with the team getting better and has a chance to make a mini-run here. For this contest, Dallas Goedert and Alshon Jeffery should be back, and that gives a much-needed lift to the offense of the floundering Eagles.

After being one of the worst quarterbacks for the first five weeks of the season, Carson Wentz has done significantly better lately. 61 of 110 passes for 695 yards have been completed by Wentz since week 5, with 6 touchdowns and 3 interceptions. He had three scores on the ground during that time, as well. But with 12 in this season, Carson still leads the league in interceptions and has turned the ball over the most of any QB in the league by far.

Will The Giant’s Build Momentum by Stealing a Win?

New York brought down the Washington football team by a margin of 23-20 their last night out. Surprisingly, at 2-7, the Giants are still in the thick of the NFC East race, as they are only two games behind the Eagles for the top spot in the East. Winning on Sunday will really improve their chances of reaching the playoffs.

After his rookie season, Daniel Jones has not really shown any signs of improvement, and this season has also been worse than the last. To go along with eight touchdowns and nine sacks, Jones completed 191 of 306 passes for 1878 yards. With a minimum of 200 throwing attempts, only he and Kirk Cousin passed for more interceptions than touchdowns this season.

Sadly, a victory for the Giants could bring them within an arm’s reach of the lead of the NFC East division, but it will be an uphill climb as underdogs.

The Giants have been one of the best teams in the league for safety on the flip side of the ball. This season, New York has given up an average of 24.3 points a game, placed at 13th in the league. This season, the Giants cornerbacks have done very well and are one of the finest units to stop the deep ball. They are still very effective at keeping teams from converting third-downs and keeping opponents down to a completion rate of 54.5 percent.

Who won’t be Available to Feature?

And the Winner is?

The Philadelphia Eagles are the favorite to win the game, having gotten healthy and vastly improved in position in this division. The Eagles are expected to come out of the box flying, with the intent to win the game in the first half.