Betting Preview, Odds, and Picks for Patriots vs Rams 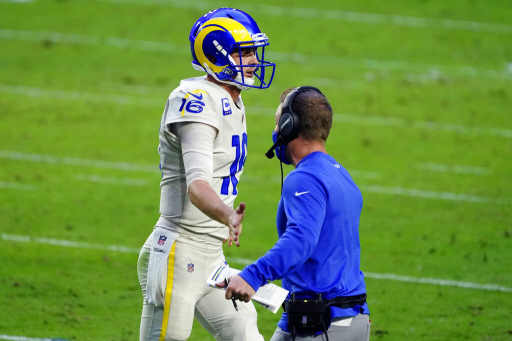 The Los Angeles Rams (8-4) host the New England Patriots (6-6) to a Thursday Night Football matchup, scheduled to take place on December 10, at 8:20 PM.

Both teams met at the Super Bowl about two years ago in the 2018 NFL season, with the New England Patriots defeating the Los Angeles Rams by a 13-3 scoreline to become the champion.

The Rams Looking to Make it 4 Wins in 5 Games

The Los Angeles Rams have been on a roll (8-4), winning three of their last four games, all thanks to their very competent defense. More recently, they defeated the Arizona Cardinals by a 38-28 scoreline on Sunday.

The Rams responded well to their loss to the 49ers (23-20) by getting a comeback in the game against the Cardinals. QB Jared Goff threw for 351 yards, with the team racking up 30 first downs.

The Rams are the clear favorite to win this game by most sportsbooks. Regardless of them giving up 28 points against the Arizona Cardinals, coach McVay’s team has on an average allowed only 20 points per game this season thus far, as they rank fifth in the NFL.

Rookie Cam Akers is in fine form, leading the Rams in rushing and with a touchdown in each of his last two appearances. He had 21 carries against the Cardinals for 72 yards, with a catch for 22 yards.

The Rams average a total of 45.3 points per game this season, making them the 17th-most points ranked team in the league, while the Patriots are pegged at 23rd-most.

The New England Patriots come into this game with a massive win against the Los Angeles Chargers (45-0). This win sums it up to four wins in their last five outings.

The Patriots rushed for 165 yards against the Chargers, with the special teams securing two of the New England Patriot’s touchdown, scoring a punt return and blocked field goal. The defense also had 18 takeaways.

The Patriots allow their opponents an average of 21 goals per game, ranking them seventh in the NFL. They have 14 interceptions this season, with J.C. Jackson leading the team with seven interceptions, ranking second in the league. The New England Patriots averages 151 rushing yards per game on the ground, thereby ranking third in the league, with Damien Harris leading the pack with a team-high of 641 yards and Cam Newton in second place with 435 yards and 11 rushing touchdowns.

The New England Patriots are underdogs in the matchup, with an odd of +210, and rightfully so. The Rams, who are favorites, have on average scored 3.9% more points per game (25.1) than the Patriots allow (21.2). We are inclined to side with the Rams to win this game.