AFC Race Heats Up With Multiple Pass Rushers on the Move 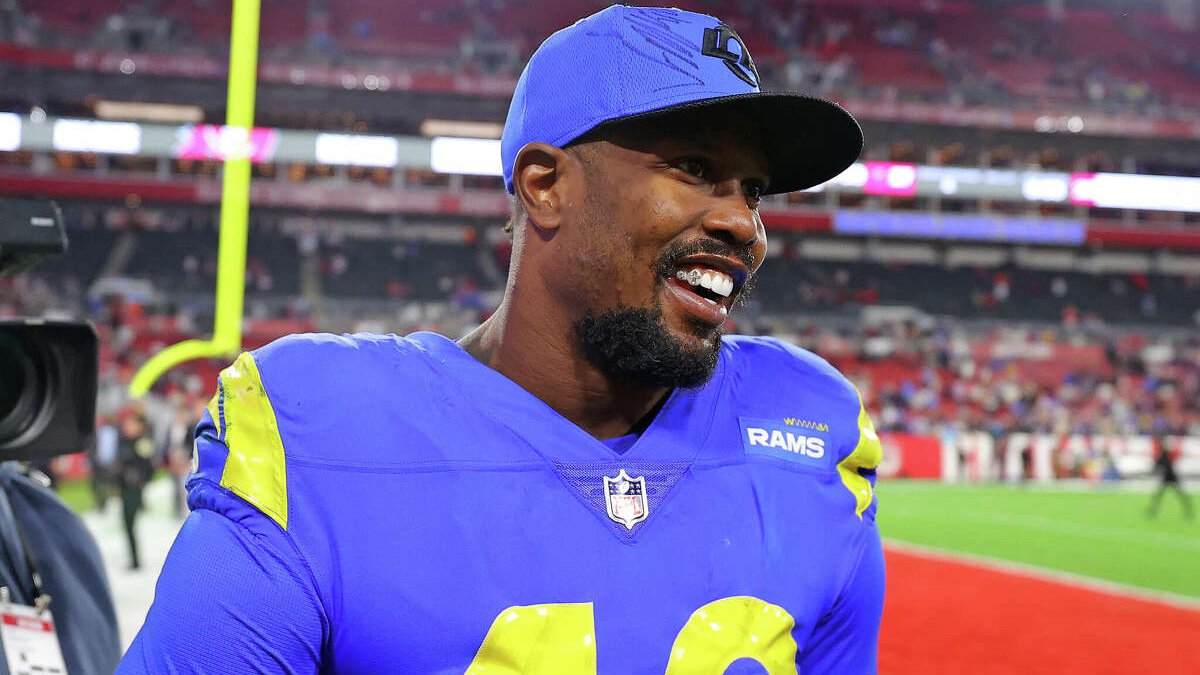 The NFL’s free agency period opened Wednesday evening, allowing the 32 teams across the AFC and NFC to build up their roster ahead of the 2022 season.

As usual, there was no shortage of deals, with many of the top-rated free agents coming off the board shortly after the market opened. Although there’s no telling how these players will work out with their new teams just yet, it’s clear that several organizations are gearing up for a Super Bowl run — especially in the AFC.

Whether it was through free agency or the recent trade market, a handful of AFC made deals on Wednesday to ensure that they’re competitive this year by adding some pass-rush help. But how many of those deals actually helped their championship odds?

Veteran linebacker Von Miller was one of the more coveted free-agent pass-rushers this year. After all, he’s a former NFL Defensive Player of the Year, seven-time All-Pro defender and two-time Super Bowl champion.

Although there were rumblings that Miller could return to the Denver Broncos or even re-sign with the Los Angeles Rams, he ultimately took a six-year, $120 million deal with the Buffalo Bills.

The Bills have been one of the AFC’s top teams in recent years, having won 34 games over the last three seasons and making it all the way to the AFC Championship game just over a year ago.

However, the Bills entered the offseason with a desperate need for pass-rush help. Even if he’s getting up there in age, Miller has 32.0 sacks in his last 46 games played, including 9.5 in 2021. He also recorded 17 QB hits last year along with 30 total pressures.

The AFC is absolutely stacked at the quarterback position, so adding Miller gives the Bills a better chance of succeeding against names like Patrick Mahomes, Russell Wilson and Joe Burrow.

It also seems like Miller’s signing has improved Buffalo’s Super Bowl LVII odds already. Before free agency opened, the Bills were +700 on BetMGM to win a championship next year, but those odds have since increased to +650. Needless to say, they’ll be a team to watch this Fall.

The Los Angeles Chargers were one of the funner teams to watch last year, with a promising offense that included QB Justin Herbert, WR Keenan Allen and RB Austin Ekeler. Unfortunately, their defense was one of the worst in the league, leading to them missing the playoffs.

That’s why Chargers general manager Tom Telesco made it his goal to improve the defense this offseason. He didn't hesitate to do so, acquiring former DPOY linebacker Khalil Mack from the Chicago Bears in exchange for two draft picks.

Mack has been one of the best outside defenders since he arrived in the NFL in 2014. He’s amassed 76.5 sacks in 117 career games since then, taking home accolade after accolade pretty much every year.

Even in his 30s, Mack continues to be an effective player. The Bears were 3-4 with him in the lineup last year and 3-7 without him, which goes to show the kind of impact he has on any given team’s defense.

A six-time Pro-Bowler and a member of the NFL 2010s All-Decade Team, he has the type of resumé that is attractive for a Chargers team that recorded the T-12th fewest sacks (35.0) in 2021. A combination of him and Joey Bosa will likely give opposing quarterbacks headaches throughout the year.

The truth is that the Chargers need a lethal pass rush to deal with their AFC West rivals. They’ll have to face Mahomes, Wilson and Derek Carr twice apiece and adding Mack to their defense will make those games more winnable.

Besides, the trade for Mack has already helped Los Angeles’ championship odds. The Chargers currently have +1600 odds (T-No. 8) to win Super Bowl LVII next season.

Former Arizona Cardinals EDGE Chandler Jones was one of the more sought-after free agents this year. After all, he’s a former Super Bowl champion who led the league with 19.0 sacks just two seasons ago.

The Las Vegas Raiders felt the need to improve their pass rush too after their defense led to many shortcomings last year. That’s why it was a no-brainer for them to ink Jones to a three-year, $51 million contract once the market opens.

Even if Jones is a bit older, he’s still an effective defender. Despite suffering a torn bicep in 2020, the 32-year-old returned to play 15 games with the Cardinals last year, finishing with 41 total tackles, 10.5 sacks, six forced fumbles and four defended passes.

With another offseason to train, it’s entirely possible that Jones could get closer back to his old self. After all, he fielded a lot of free agency interest for a reason.

Spending all of that money on Jones was necessary for the Raiders to stay afloat in the AFC West. Each of their rivals has also made significant improvements, forcing them to make a big splash if they want to avoid the division’s basement.

Even if Jones’ signing does improve their defense, oddsmakers still aren’t taking the Raiders seriously. Their +5000 odds on BetGM is tied for No. 21, putting them +3400 odds behind the next-closest AFC West team (Chargers). Unless more moves are on the way, Las Vegas will still have to play catch-up.

Randy Gregory became a Dallas Cowboys fan favorite in recent years and entered free agency following a solid 2021 campaign. The 29-year-old defensive end was held to 12 games due to injury but still finished the year with 19 total tackles, 6.0 sacks, three forced fumbles and an interception.

The Cowboys’ defense was already lacking as it was, which made it even tougher when Gregory inked a five-year, $70 million with the Denver Broncos. Initially, Gregory had agreed to remain with the Cowboys on a similar deal. Instead, he is now headed to Denver.

What’s already intriguing is that the Broncos had one of the better defensive units in the NFL last year. They ranked second when it came to scoring defense and allowed the eighth-fewest passing yards.

However, their pass rush took a blow when the team traded Von Miller away to the Los Angeles Rams in November. Fortunately, Gregory and his ability to get to opposing quarterbacks (29 pressures in 2021) should help make up for that loss even if he plays a different position than the two-time Super Bowl champion.

Now, Denver’s defense ranks among the best in the league, which is finally balanced by having Russell Wilson as the new starting quarterback. That should help them stay afloat in an AFC Conference that’s getting tougher by the season.

After their first offseason moves, the Broncos now have +1400 odds (T-No. 6) to win Super Bowl LVII, as per BetMGM. Those odds make them the third-ranked AFC team, trailing only the Bills and Kansas City Chiefs.

Assuming management continues to flesh out the roster through free agency and the 2022 NFL Draft, the Broncos could continue moving up the list before we even reach September.

While the Indianapolis Colts aren’t typically known for their defense, they’ve been making some defensive improvements in recent years. Having said that, they had one of the worst pass rushes in the league last year, recording 33.0 sacks (T-No. 25) while allowing 234.1 passing yards per game (No. 19).

It didn’t take long for Colts general manager Chris Ballard to address that need. On Wednesday, Indianapolis shipped off cornerback Rock Ya-Sin to the Las Vegas Raiders in exchange for DE Yannick Ngakoue.

Although Ya-Sin was coming into his own in recent years, Ngakoue is exactly what the Colts need. The 26-year-old pass-rusher suited up in all 17 games for the Raiders in 2021, recording 10.0 sacks, 23 quarterback hits and 36 pressures.

Yes, Indianapolis will be his fifth team since 2019, but that doesn’t mean he’s a bad player at all. Ngakoue consistently gets close to double-digit sack totals each year, which is a necessity for the Colts, who didn’t have a player last year finish with more than 7.0 sacks.

While Ngakoue does improve the Colts’ pass rush, they’re still far from being a top contender in the AFC. Their offensive passing game is still a mess, with quarterback and wide receiver being two positions they need to continue improving.

BetMGM is currently giving the Colts +2500 odds to win the Super Bowl next year, putting them in a tie for 12th-best odds. If they can continue improving the offense while adding a few more starters in the secondary, these odds could look different come the Fall.

Until that happens, Indianapolis shouldn’t be in the discussions for the AFC’s best team just yet.

The 2022 French Open is underway at Stade Roland Garros in Paris, France, and we are already almost through the first week of play. Tomorrow, the remaining third-round matches will take place, after which the men’s and women’s singles draws will be down to their final 16 contenders. In both men’s and women’s singles, there END_OF_DOCUMENT_TOKEN_TO_BE_REPLACED