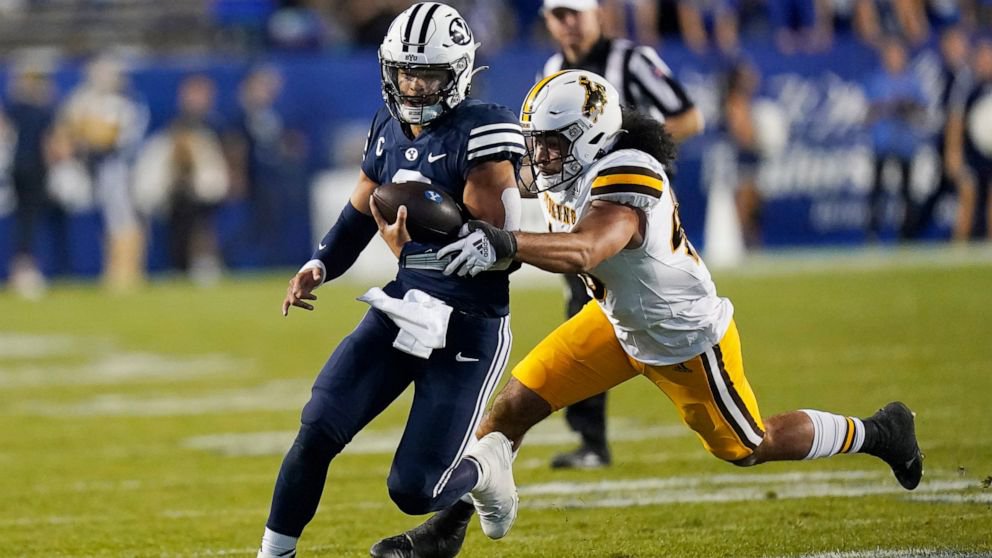 This week, the college football slate will kick off with a battle in the Beehive State. On Thursday evening, Provo will be the place to be as Utah State and BYU duke it out for The Old Wagon Wheel.

This will be the 90th showdown between the Aggies and Cougars, with BYU holding a 50-37-3 edge in the series.

BYU has captured the last two games and won 34-20 in Logan last year behind a monster game by running back Tyler Allgeier, who ran for 218 yards and three touchdowns on 22 carries.

The Cougars, who are ranked 19th in the AP poll and 20th in the Coaches poll this week, are heavily favored to make it three straight wins come Thursday.

BYU bounced back from a 41-20 loss at Oregon with a 38-24 win over Wyoming on Saturday, while the Aggies returned to action after a shocking home loss to Weber State two weeks ago with a 34-24 home loss to UNLV, their third loss in a row since opening the season with a win over UConn.

Game odds are via Caesars Sportsbook. Odds from our other recommended legal sports betting sites may also appear in this article.

So, here is a spot to wisely split your plays between multiple outs to get the best numbers possible.

In their 35-7 loss to Weber State, Utah State’s Logan Bonner threw three interceptions, including one that was returned for a touchdown. Then against UNLV, he was picked off five times.

Bonner had thrown only 21 interceptions in 898 career attempts coming into this season and had gone without a pick in his first two games this season. And prior to the Weber State and UNLV disasters, the sixth-year senior had only three multi-interception games in his career.

Bonner is much better than his last two games, and I don’t think he will throw the Aggies out of the game like he did against Weber State and UNLV.

All that said, this should be a very comfortable win for the Cougars. Jaren Hall and BYU’s offense will have yet another big game after racking up over 500 yards against Wyoming.

However, I do feel that the Aggies can do enough to cover, especially if Bonner can keep the mistakes down. If he can, his team can at least score as many points as Wyoming did on Saturday.