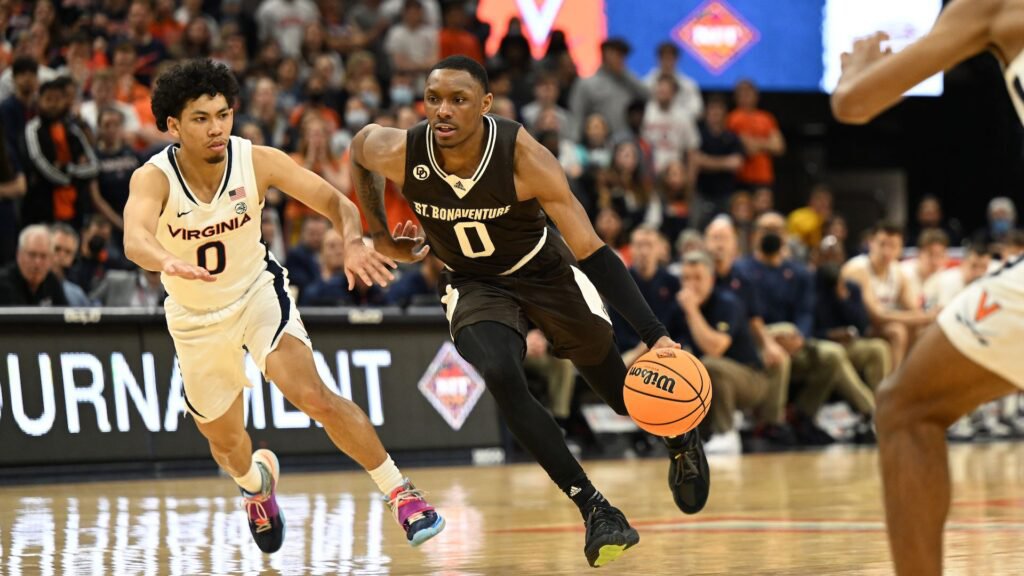 In the first of Tuesday’s NIT semifinal showdowns at Madison Square Garden, two former champions face off, as St. Bonaventure, the winner of the Oklahoma quarter of the 2022 NIT bracket, takes on Xavier, who emerged from the Dayton quarter.

While the Final Four can’t get here fast enough, there is NIT action to tide us over until Saturday’s matchups between North Carolina and Duke and Villanova and Kansas take place in New Orleans.

This will be the seventh semifinal appearance for the Bonnies, which ties them with Duquesne and Providence for third in all-time NIT semifinal appearances. But it marks their first trip to the semis since 1977, when they defeated Houston 94-91 in the second-highest scoring championship game to date.

Xavier, meanwhile, is making its third semifinal appearance and first since 1999, when they lost to eventual runner-up Clemson in the semifinals and routed Oregon in the third-place game. The Musketeers won the tournament in 1958, defeating Dayton 78-74 to win the title.

Both of these teams aspired to be in the NCAA Tournament this season but fell short of their goal, with Xavier undergoing a coaching change as a result. But getting to win what could be the last NIT title game at MSG for a little while will be good consolidation, so both teams will be up for this one. Who will take the win to set up a championship clash with the Washington State-Texas A&M winner?

While college football has the “Power 5” quintet of the ACC, Big 12, Big Ten, Pac-12, and SEC, in college basketball, that group expands to include the Big East.

The Atlantic 10 is consistently one of the top conferences outside of the six big boys, and that was the case once again this season. The conference had two NCAA Tournament teams in regular season champion Davidson and tournament champion Richmond, and St. Bonaventure, Dayton, Saint Louis, and VCU all landed in the NIT field.

The Bonnies were expected to be in the Big Dance and opened the season ranked in the top 25, reaching as high as #16 in the rankings. But after a 5-0 start that included a Charleston Classic championship win over Marquette, St. Bonaventure lost a few too many games to fulfill those expectations, and a heartbreaking loss to Saint Louis in the quarterfinals of the A-10 tournament ended their NCAA Tournament hopes.

But they have put that disappointment behind them to make a run to MSG, winning three games on the road against Power 6 teams to get to this point. They opened the tournament with a win over #4 seed Colorado, took out top -seeded Oklahoma in the second round, then edged Virginia in Charlottesville in the quarterfinals.

The Bonnies are largely dependent on their starting five, each of whom averages double figures in scoring. All five starters average 30+ minutes per game, with big man Osun Osunniyi the only starter not at 37+ minutes per game. Forward Abdoul Coulibaly is the only notable reserve, averaging 9.6 minutes per game and 3.7 points per game while playing in all 32 games.

Xavier exercises the opposite approach, with eight players averaging 15+ minutes per game. Like the Bonnies, the Musketeers have five double-digit scorers, though only two, guards Colby Jones and Paul Scruggs, average over 30 minutes per game.

Scruggs, who led the team in assists and was tied for the team lead in steals, second in scoring and fourth in rebounding, went down with a torn ACL in the second-round win over Florida, which is a big loss.

With such limited depth, there’s no margin for getting into foul trouble, but St. Bonaventure has done a great job in the NIT of minimizing those concerns. Osunniyi had four fouls against Colorado and Virginia, while guard Dominick Welch had four against Oklahoma. But no one else did, and neither player fouled out.

However, Xavier is one of the most prolific free throw shooting teams in the country, averaging over 21 attempts per game from the foul line. They have 20+ free throw attempts in 21 games this season, including all three NIT games: 23 vs. Cleveland State, 22 vs. Florida, and 24 vs. Vanderbilt.

So, if you make any play on this matchup, the under is the smart move.

As for who wins, it’s hard to not keep riding with St. Bonaventure. Xavier has been impressive in their run to the semis, but so have the Bonnies, who won three tough road games to get the chance to play at MSG. The Musketeers were able to squeak by Vanderbilt without Scruggs, but his absence will be felt in this matchup.