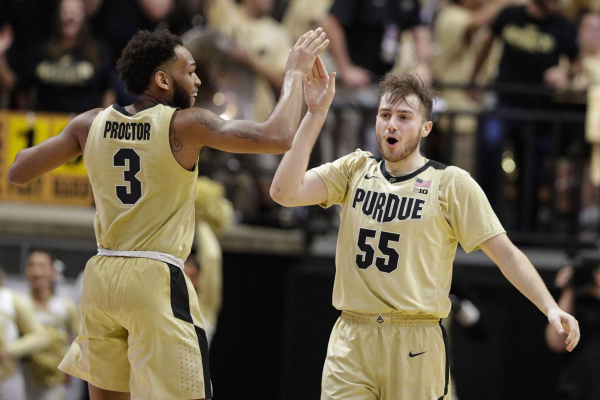 It’s been a little more than eight months since the Virginia Cavaliers edged the Purdue Boilermakers in the Elite Eight round of the NCAA Tournament. Virginia used that overtime win to propel itself to the national championship.

On Wednesday night, the Boilermakers got their chance to snap No. 5 Virginia’s 13-game winning streak and exact revenge, and they did just that.

In what was supposed to be a low-scoring affair between two of college basketball’s best defenses, Purdue made beating a top-five team look easy. In fact, the upset of the Cavaliers marked the first time in the 52-year history of Mackey Arena that Purdue has defeated a non-Big Ten team ranked in the top five.

According to Purdue head coach Matt Painter, the goal was to “loosen up a defense that’s trying to prevent the ball from getting into the paint.”

To do so, an offensive adjustment was needed. Sophomore guard Sasha Stefanovic would learn that he would be making his first career start just hours before the game. To reward Painter for this decision, Stefanovic racked up a career- and game-high 20 points.

Jahaad Proctor added another 16 points for the Boilermakers, who didn’t allow a single opposing player to score more than 11 points in the contest.

With an offensive eruption and its usual suffocating defense, Purdue throttled No. 5 Virginia by a score of 69-40 in the Big Ten/ACC Challenge.

Cavaliers’ Cause for Concern

The most glaring issue facing Virginia coach Tony Bennett and his team is the severe lack of scoring through eight games of the season. While the Cavaliers have used strong defensive efforts to earn a 7-1 record thus far, they certainly haven’t had an offense fit for a top-five team.

By putting up only 40 points against Purdue, Virginia has now been held to fewer than 50 points in three straight games.

Part of the reason for an inept Cavaliers’ offense can be attributed to Purdue’s defense, but that doesn’t excuse Virginia’s 16 turnovers, 37.2 percent shooting from the field, or going 4 of 24 from three.

Defensively, Virginia should be fine. Wednesday’s game against Purdue figures to be an outlier for an otherwise dominant defense that entered the contest with the nation’s best defense, allowing just 40.8 points per game. However, the Cavaliers allowed Purdue to rack up 32 points in the first half, so one more poor performance like that would certainly be another cause for concern for Bennett.

Moving forward, Virginia will have a chance to immediately bounce back from its first defeat of the season by hosting the No. 7 North Carolina Tar Heels on Sunday. A win over a top-10 opponent would go a long way towards keeping Virginia in the top 10 after this beatdown from Purdue.

If Purdue can use this victory to propel itself on a winning streak, it could very well start making some noise with a couple of ranked wins under its belt (No. 5 Virginia, No. 20 VCU).

However, the Boilermakers are currently 5-3 and trail well behind the leaders in the Big Ten, such as 9-0 Maryland, 8-0 Ohio State, and 8-0 Indiana.

On the bright side, Purdue’s big win over Virginia shows that it can compete with any team in the country on the right night, so ruling out a tournament run would be unfair.

For now, the Boilermakers are sitting in a group of teams tied for the 21st-best odds of winning the national championship this year at +5000.

As for the defending national champs, one loss isn’t something to obsess over. Come tournament time, Virginia figures to play a big role with that daunting defense. If the Cavaliers can find some scoring, they’ll be a scary team.

Trailing behind the favorite Louisville Cardinals and Michigan State Spartans, both of whom own odds of +900 to win it all, Virginia owns the nation’s seventh-best odds of +1500.