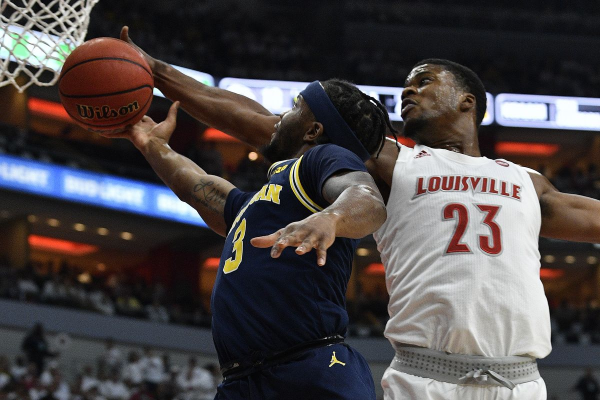 In a matchup of undefeated heavyweights, the No. 1 Louisville Cardinals were set to prove whether or not they deserved the top ranking in the nation as they hosted the No. 4 Michigan Wolverines Tuesday night.

Well aware of the fact that they’re the fourth No. 1 team in the nation in just the fifth week of the season, the Cardinals were prepared to make an impression in their debut as college basketball’s best.

Louisville both attacked the opposition and defended its own rim with relentlessness, and it made Michigan look helpless at times.

This signature win for second-year coach Chris Mack was built on a strong defensive effort in which the Cardinals held the Wolverines to roughly half their scoring average of 82.4 points per game. As a team, Michigan shot just 26 percent on the night.

It was a gritty game that made offense difficult for both squads, but Louisville forward Jordan Nwora rose to the occasion with 22 points and 12 rebounds. Nwora’s contribution was particularly necessary on a night when the Cardinals shot just 37 percent.

In its debut at No. 1, Louisville proved itself to be the superior team against a squad that rose to No. 4 in the rankings by recently taking down No. 7 North Carolina and No. 9 Gonzaga. With a final score of 58-43, the Cardinals remain atop the college basketball world.

The Cardinals didn’t just solidify themselves as the top-ranked squad in the country, and they didn’t simply hand an undefeated team their first loss. Louisville outplayed Michigan in nearly every facet of the game and used suffocating defense to earn a double-digit victory.

That’s the sort of style of play that can win you Elite Eight and Final Four games come tournament time, which is where any team ranked No. 1 should have its sights set.

Yet a great defensive effort won’t mean anything unless you have a scorer who can get to the basket and earn tough points when a defensive game puts points at a premium. With Nwora, 8-0 Louisville has that, too.

In addition to guiding the Cardinals over Michigan, Nwora has led Louisville in scoring in every contest this year. On the season, Nwora is averaging 21.9 points and 7.5 rebounds per game while hitting 46.7 percent of his three-point attempts.

For now, Louisville has proven itself as the top team in the nation, and we may not see it tested again until a matchup with No. 8 Kentucky at the end of December.

Michigan Earned Its Way To Top

Under head coach Juwan Howard, the 7-1 Wolverines are making an impression. In the Battle 4 Atlantis tournament in the Bahamas, Michigan ripped off three straight wins against Iowa State, North Carolina, and Gonzaga.

Following that run up with a contest against the No. 1 Cardinals in Louisville was simply too much to ask of this Michigan team.

However, those recent wins earned the Wolverines their 22-spot jump up to No. 4 in the AP Poll, and while it is likely to fall after getting trounced by Louisville, Michigan will have a chance to remain in the top 10 with a game against Iowa later this week.

We’ll also see Michigan on display against No. 13 Oregon in the middle of December before they take on No. 11 Michigan State early in the New Year.

Is Louisville Destined For Final Four?

While college basketball experiences more ups and downs than perhaps any other sport in America, Louisville is starting to look like it will be dominating the rankings for some time.

And because they’re one of very few teams yet to slip up this season, the 8-0 Cardinals are currently the favorite to win the NCAA Tournament with odds of +750.

Louisville is followed by the +900 odds of Duke and Kansas and the +1100 odds of Kentucky and Michigan State, which means the Cardinals are in a league of their own right now.

Anything can happen when it comes to March Madness, but Louisville has the style of play to win against anyone at any time, and it looks the most likely to book a trip to the Final Four.