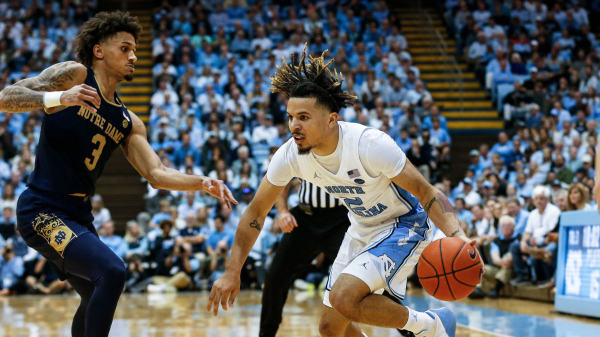 Wednesday night features a matchup of top-10 teams when the No. 6 Ohio State Buckeyes (7-0) travel to the Dean E. Smith Center to take on the No. 7 North Carolina Tar Heels (6-1). While both of these teams hope to continue ascending up the national ranks, a win for either team could be the type of signature win that really catapults a team in the rankings. Tipoff for this one is scheduled for 9:30 pm ET.

For the Ohio State Buckeyes, it has been quite a start to the season, going unbeaten thus far. The Buckeyes did beat No. 23 Villanova 76-51 earlier in November but have not faced any other top-25 teams to this point. In their last three games, they have beaten Morgan State (90-57), Kent State (71-52) and Fort Wayne (85-46).

North Carolina has been a bit more battle-tested. The Tar Heels’ lone loss of the season came against No. 4 Michigan 73-64; otherwise, the Tar Heels are also unbeaten. In their last matchup on Friday, they beat the No. 13 Oregon Ducks 78-74. They have also beaten unranked Alabama 76-67 and Notre Dame 76-65.

The Tar Heels come into this one as three-point favorites playing at home. The over/under for total points scored is 136.

On the defensive end, it is once again Ohio State that comes out ahead. It currently ranks fourth in the nation, allowing just 52.7 points per game (52 on the road). North Carolina ranks 108th, allowing 66.1 points per game (62.3 at home).

It certainly isn’t an easy draw for the Buckeyes in this ACC/Big Ten Challenge, but for a team trying to prove their worthiness of a top-10 ranking, this is a good litmus test. The Buckeyes are led by junior forward Kaleb Wesson, who is averaging 12.7 points, two assists and 9.1 rebounds per game.

Trying To Prove They Are For Real

After already losing to one Big Ten team in Michigan, the Tar Heels have their sights set on some revenge. To do so, coach Roy Williams will try to turn up the pace and win the transition game with Ohio State. If he can make it a track meet, his team will likely be in good shape.

Leading the way for North Carolina thus far is freshman guard Cole Anthony, who is averaging 20.7 points, four assists and 7.3 rebounds per game. Really, the Tar Heels are tough on the run and on the boards as they have five players that average four rebounds or more per game.

Taking Ohio State And The Points

Admittedly, to win this game, or even keep it close, will be a big step for the Buckeyes as they take on a tough Tar Heels team on their own floor. With that being said, I haven’t seen anything to suggest that Ohio State can’t do it. The Buckeyes certainly can’t get in a track meet with North Carolina, but if they can control the tempo and control the boards, I think Ohio State has a good a shot as anyone to take down the Tar Heels.

It is worth noting that North Carolina has struggled against the spread, only going 2-5 thus far while Ohio State is 6-1, but generally, those spreads haven’t been this close. Still, while I wouldn’t blame you for taking a flyer on North Carolina at home, I like Ohio State and the three points in this one.