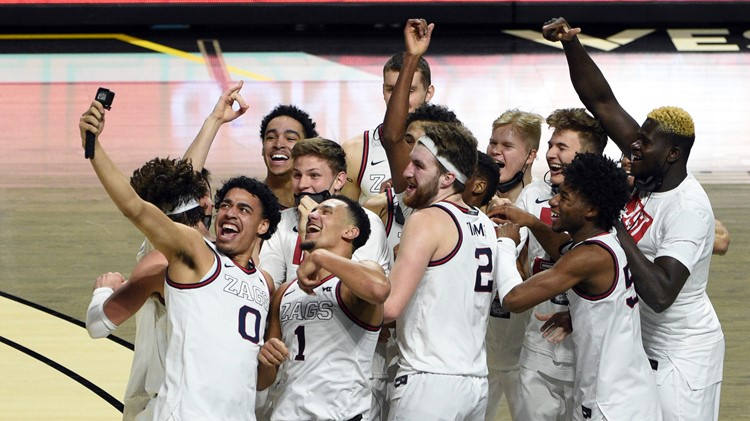 It’s a wild weekend of March Madness action, and of the two days of Sweet 16 games, Sunday’s matchups are the most exciting. Gonzaga is always a great show, and even though they likely win with ease, the game against Creighton should be very entertaining. Alabama’s showdown with upset-minded UCLA could be a romp, as the Tide have two double-digit wins in their first two March Madness games.

But the other two games should be decided in the final few minutes, with Michigan taking on Florida State and Pac-12 rivals Oregon and USC facing off. Oregon and USC have a nice rivalry in football, but maybe this game heats things up on the hardwood too. There are lots of great lines to bet into as well, of course. With that in mind, let’s look at Sunday’s March Madness matchups.

Gonzaga has advanced to this point without too much trouble. In both of their games, it took them a few minutes to get organized. But once they did they were the team we have seen all season long, scoring points as easily as any team in history. Yes, I did read that this is the best two-point shooting team ever, even counting teams before the addition of the three-point line. They are just so good at getting the shots they want, which is why Creighton doesn’t stand much of a chance. Drew Timme is so efficient inside, and the Bluejays don’t have the size or skill inside to match up.

It is great that the Bluejays recovered from their debacle against Georgetown in the Big East Tournament championship game to win a couple of March Madness games. But they barely beat UC Santa Barbara in the opener before beating Ohio to advance to the Sweet Sixteen. Neither of those games has shown that this team is ready to take down a team like Gonzaga. The only thing in their favor is that they don’t mind playing quickly. You have to be able to put up points against the Zags. Creighton might score 80 and still lose by 15 though.

This is the second of two games this weekend that is a rematch from the regular season. USC beat Oregon by 14 at home the lone time they played this year, but it would be surprising if we get another game that is that lopsided in this spot. Based on what we have seen from these teams in the NCAA Tournament, it is intriguing to see what style of game we will get. Oregon has only played one game and they blitzed Iowa. They played fast, and their hot shooting made for a pretty easy win.

USC is a much better defensive team than the Hawkeyes, so that might not work so well in this one. USC looked great in their second-round win against Kansas, putting away the game by halftime. In both of their recent wins, coaching seemed to be an advantage. Dana Altman and Andy Enfield are two of the most successful coaches when it comes to winning and covering this time of year. This game could go either way, and the best value is with the underdog. Right now that is the Ducks.

Michigan is the last Big Ten team in the NCAA Tournament. That is not a total shock given they are a #1 seed, but how we got to this point is. Michigan has not steamed through its bracket to get to this point. They were losing in the second half against LSU, who is a very athletic team. That is why the Wolverines look vulnerable heading into this game.

Now they are going to be taking on maybe the most athletic team in the field in Florida State. The Seminoles are very long and deep too, and they are going to be able to look Michigan in the eye in the paint. FSU should be able to limit Michigan center Hunter Dickinson and get a hand in the face of their shooters on the perimeter. The knock against the Seminoles is that they can suffer from major scoring droughts. They have talent, but they lack that player that can just go and get a bucket. This matchup is favorable overall, however. If there is an upset on Sunday, this is the most likely spot.

Of the four games of the day, this one seems to have the most potential to not be competitive. Alabama looked very good in their second-round game against Maryland scoring 96 points and winning by 19. Throughout the season, the Crimson Tide have made some really good teams look really bad, which is due to the way they play. Alabama often puts up 30 or more three-pointers, and when they are falling they can put up points in a hurry.

UCLA coach Mick Cronin is a defense-first guy, but he has not transformed UCLA into Cincinnati West, at least not yet. The Bruins have a couple of really slick offensive players in Johnny Juzang and Jaime Jaquez, who have really shone during March Madness. But are they going to be enough against an Alabama defense that is much better than most realize? UCLA will put up a good fight, but they don’t have enough offense to really stay with Alabama unless the Crimson Tide are missing. If both teams play well, the Bruins will still lose.