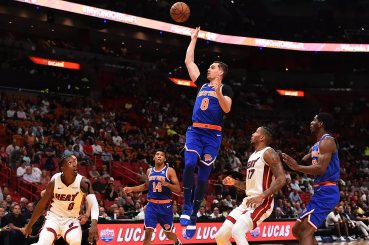 There have been some teams that have totally and completely outplayed their expectations this year, like the Bucks and Raptors. And then, if you look at the bottom of the league, there are three teams that have hardly been able to win at all. We’ll tell you exactly what they need to do in order to begin their ascension.

It has been a long season for the Knicks, who may have also hurt their future in the process. We have long been waiting for Kristaps Porzingis to return from injury, but before that could happen, he claimed to be unhappy and was sent to the Mavericks for DeAndre Jordan and Dennis Smith Jr. The Knicks do not have many franchise player-potential type of guys on their roster. But, if you take a look… probably Dennis Smith and Mitchell Robinson are the only two guys with “star” potential.

They are going to have their work cut out for them this offseason. They are hoping to land Kevin Durant and/or Kyrie Irving, plus have a chance at the #1 pick in the draft. They will likely build around their new PG, and young center, and if they can find a legitimate SG and SF so that they can bring Kevin Knox off the bench, that would be great. Also, the #1 pick and Zion would help.

The Suns have not had a very good season, though they have been competitive of late. There could not be an angrier player in the league than Devin Booker, who will be missing the playoffs yet again. It is clear that they can build around Booker, and the #1 pick DeAndre Ayton. If they choose to re-sign Kelly Oubre, they could have their long-term small forward of the future. We should expect them to explore trade offers for TJ Warren this summer, who has hardly been able to stay healthy this year.

They are a long way from the top and NEED to draft the best point guard available in the draft, perhaps Ja Morant. They need a legitimate power forward because they do not have one on the roster. They also need guards who can come in off the bench and score, because they have nobody. Do those things; then we’ll see how they are.

They haven’t been winning much this year, but have shown signs of life in recent weeks. Collin Sexton is looking like a potential franchise guard for the Cavs, while Cedi Osman has been showing that he can take games over when the team needs somebody to step up. Despite all of the injuries they have to key guys on the roster, they are competing night in, night out. Kevin Love has been a star since returning from his broken toe, and a guy they have to keep going forward.

Three positions on the Cavs should be set for opening day next year. Sexton at PG, Osman at SF, and K. Love at PF. Jordan Clarkson (17 ppg) should be serving as the sixth man, with Larry Nance Jr. as the seventh. Aside from that, a lot is up for grabs. A stop-gap guard to Clarkson, with a center also being a primary need. They will end up with a top-three pick in the draft most likely, and they will need to make it count. They are a few moves from contention.